The final day of Shree Muktajeevan Swamibapa Smruti Mandir Rajat Mahotsav is upon us already – 7 days of faith and festivities have flown past in what must be one of the most memorable festivals of Maninagar Shree Swaminarayan Gadi Sansthan.

A truly befitting celebration to mark the silver Jubilee of the divine and unsurpassable monument to the love between Guru and disciple that is Smruti Mandir. This last congregation was an unforgettable climax to Mahotsav.

Acharya Swamishree Maharaj arrived at Smruti Mandir where the hundreds of members of Shree Muktajeevan Swamibapa Pipe Band (Maninagar, London, Bolton, Nairobi, New Jersey) formed a guard of honour for His entry in the Mandir. Acharya Swamishree Maharaj then presided on a splendid golden chariot alongside Jeevanpran Swamibapa, which was hand-drawn into the Sabha Mandap by His devoted sants.

The Tula Ceremony of Jeevanpran Swamibapa soon commenced to mark His manifestation day – the highest form of honouring – where Swamibapa’s Murti was ceremonially weighed against flowers, beetlenuts, coconuts, sakar-sugar and finally, pure silver to mark the silver jubilee of Smruti Mandir. Jeevanpran Swamibapa was adorned in a splendid flower chadar, a colossal gold necklace and magnificent gold moogat (crown). Disciples then had the opportunity to perform aarti to Lord Swaminarayanbapa Swamibapa presiding in the impressive Tula.

A number key donors of foodstuffs then went for the darshan of Acharya Swamishree Maharaj. US disciples offered Swamibapa and Swamishree huge flower garlands before the disciples of Panchmahal once again showed their unparalleled devotion and dedication, presenting the Lord with a replica of Smruti Mandir meticulously created from puffed rice. Shree Muktajeevan Swamibapa Pipe Band London then presented Acharya Swamishree Maharaj with a trophy – a token of their gratitude at being invited to offer their humble service during this Mahotsav.

Acharya Swamishree Maharaj showered His divine Ashirwad on everyone, which today carried the message that God becomes pleased at seeing a truly humble disciple. Remarkably, towards the climax of Swamishree’s Ashirwad, He spontaneously stood up in delight and conducted the entire congregation of thousands to dance to the kirtan “Eva Krupalu Bapashree” – yet another indelible memory of this remarkable Mahotsav, even neglecting His worldly age of nearly 75. Acharya Swamishree Maharaj’s Ashirwad was followed by Jeevanpran Swamibapa’s divine blessings. For Ashirwad highlights, follow @SGadiManinagar

The sabha and indeed the entire Mahotsav finished with senior representatives offering poojan to Acharya Swamishree Maharaj before He once again defied His worldly years, took to His lotus feet inspired the crowd to rejoice in dance as kirtans boomed out across the sabha mandap. Sants then lifted Swamishree’s Gadi and carried Him through the congregation, which just sent the crowd into an even greater frenzy. The delight and emotion on Acharya Swamishree Maharaj’s face was evident for all to see. A superlative end to a superlative Mahotsav. 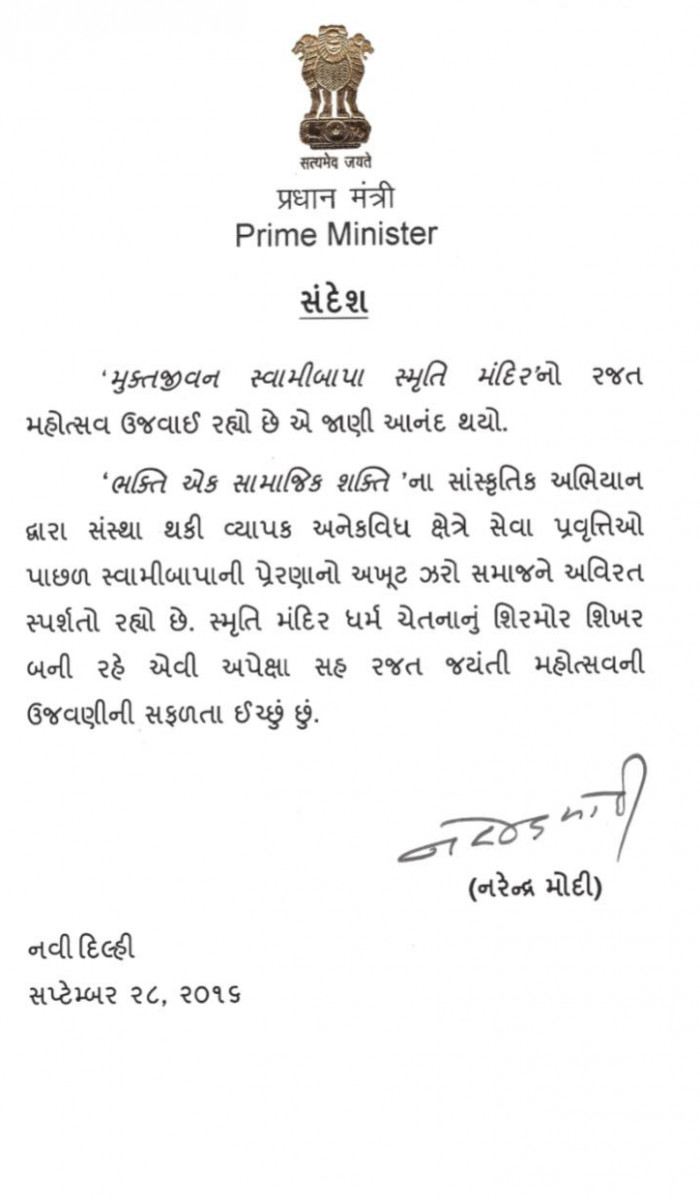 I am pleased to take note that the silver jubilee festival of 'Shree Muktajeevan Swamibapa Smruti Mandir' is currently being celebrated.

'Devotion is one of society's strengths'. Through that spiritual campaign, your Organisation, focussed on multiple fields and activities related to serving society, ensures that Swamibapa's inexhaustible river of kindness remains touching the people. With the expectation that the Smruti Mandir will become the foremost pinnacle for the consciousness of the religion, I wish for the success of the silver jubilee festival.