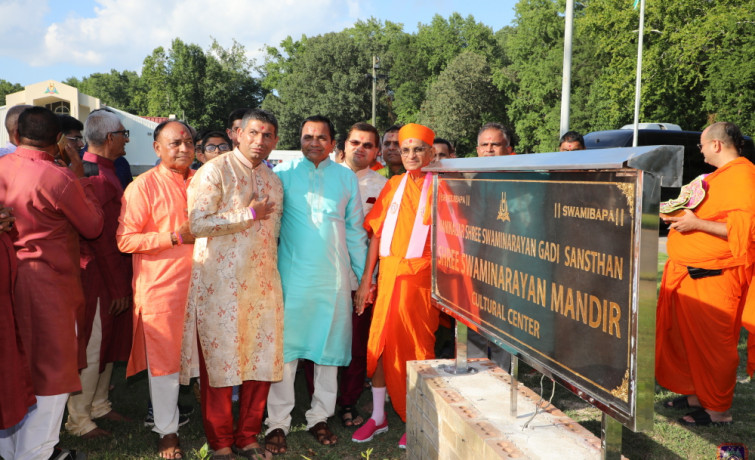 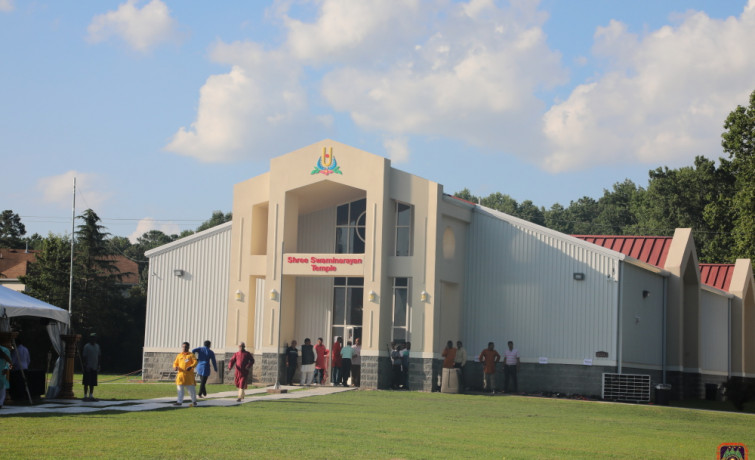 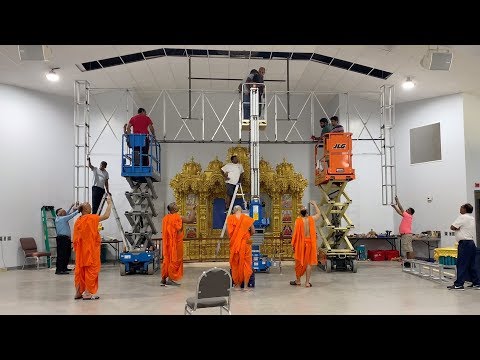 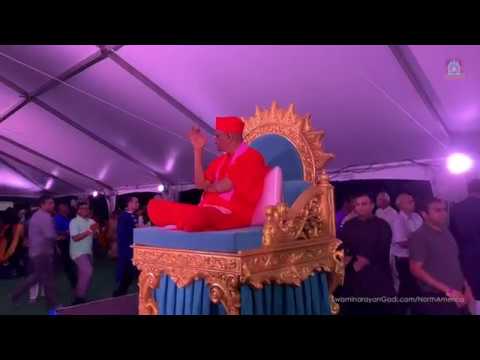 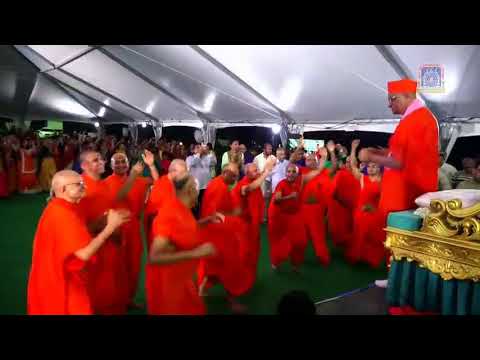 Inspired by His Divine Holiness Acharya Swamishree, from Friday, July 19 through Sunday, July 21, 2019, Acharya Swamishree, sants, disciples of Maninagar Shree Swaminarayan Gadi Sansthan from all over the world, and members of the broader Virginia community, celebrated the arrival of Supreme Almighty Lord Shree Swaminarayan, Jeevanpran Shree Abji Bapashree, and Jeevanpran Shree Muktajeevan Swamibapa to this great state with the Murti Pratishtha Mahotsav and Silver Tula at Shree Swamianrayan Mandir – Chesapeake, Virginia! With the opening of Chesapeake temple, Acharya Swamishree Maharaj has established yet another chapter in the USA and North America towards His mission to spread the message of peace, unity and tolerance, as well as the supreme philosophy of Lord Shree Swaminarayanbapa Swamibapa, to all.

Just a week prior to the grand opening ceremonies, there was much work to be done in order to complete the temple’s renovations and construction. Even when Acharya Swamishree visited the temple just a day prior to the start of the Mahotsav, there were still several last-minute preparations to be completed. However, the Lord and Acharya Swamishree are divine, their actions and miracles are also divine, and they work through their sants and disciples. Sants as well disciples from the UK and other mandals in North America, had all come to Virginia one to two weeks prior to the celebrations to all join forces and complete the remaining work with their fellow brothers and sisters of Virginia. The Lord worked through them all, and the temple and its premises were celebration-ready by the late afternoon of Friday, July 19, 2019 for the opening ceremonies!

The opening ceremonies took place in the late afternoon and evening of Friday, July 19, 2019. In the early afternoon, sants and disciples performed samuh parayan poojan, and at approximately 5 PM, Acharya Swamishree arrived to the temple premises and inaugurated the main sign at the entrance of the temple. He then performed the ribbon-cutting ceremony at the entry doorways of the temple before walking inside and bestowing His divine darshan to hundreds of eager disciples from all over the world. Acharya Swamishree concluded the samuh parayan poojan and then performed sandhya aarti and niyams. Thereafter, everyone proceeded outdoors for dinner prasad.

Following dinner, everyone proceeded to the sabha mandap, where a grand stage had been erected by sants and disciples for the Mahotsav celebrations. By this time, an array of musical instruments and microphones had been set up on stage for the evening’s samuh raas program to celebrate the opening ceremonies. Sants and disciples from various Mandals of North America had come together to form a band for the evening’s music.

As introductory music began to play, Acharya Swamishree was escorted to the sabha mandap by disciples and then seated upon a grand throne. The raas then commenced. Numerous sants and disciples played various instruments and sang both new and traditional kirtans for the live samuh raas. Instruments included three dhols, one roto drum, one bass roto, two keyboards, and one trombone. There were a total of five singers. Acharya Swamishree bestowed His divine darshan upon all the sants and disciples performing on stage, as well as the hundreds who danced around Him in celebration of the Chesapeake temple’s opening. As a special conclusion to the evening, all of the mandals (including those in North America, from around the world, and, of course, our Sant Mandal!) were called up one by one to perform sanedo in front of Acharya Swamishree. Everyone had a truly memorable opening evening dancing to the variety of kirtans to please Lord Shree Swaminarayanbapa Swamibapa and Acharya Swamishree. 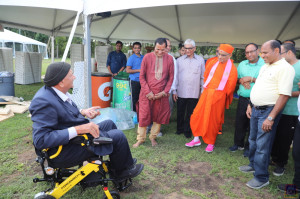 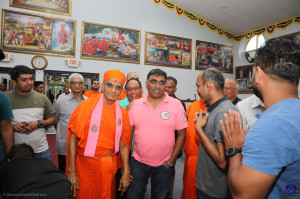 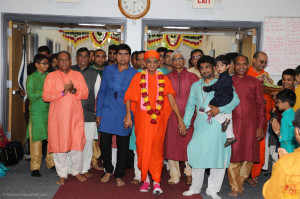 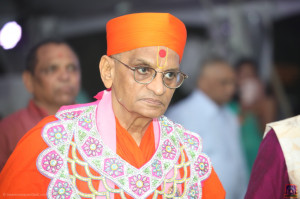 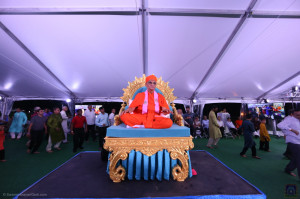 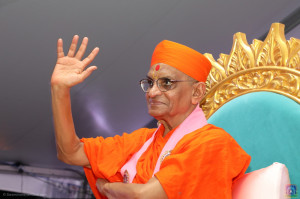