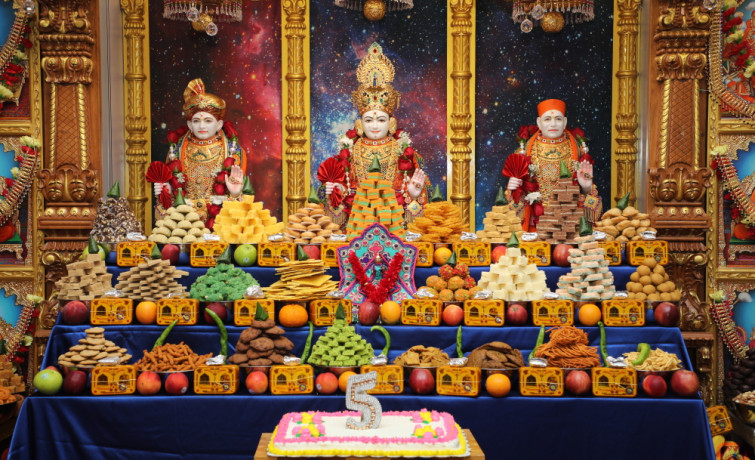 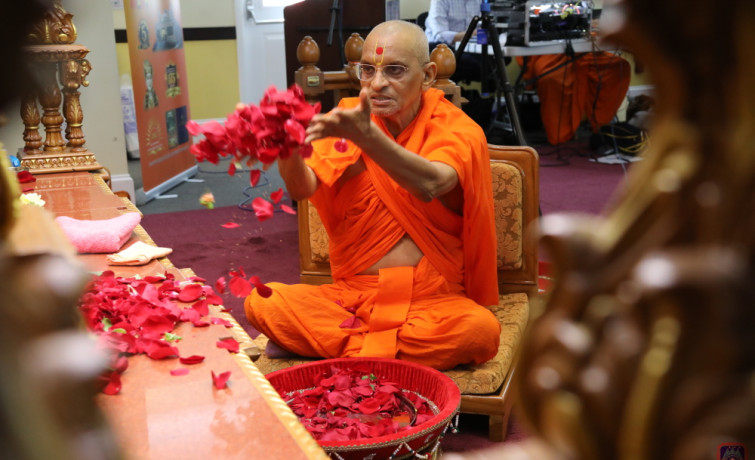 After spending a few days in New Jersey, His Divine Holiness Acharya Swamishree and sants continued onto Delaware for the next phase of their 2019 Vicharan.

Upon arriving in front of Lord Shree Swaminarayanbapa Swamibapa's sinhasan, Acharya Swamishree bowed to the Lord and then turned around to wave and shower blessings upon the entire congregation. He was then seated on His gadi, after which the disciples of Delaware ceremoniously welcomed Acharya Swamishree and sants with fresh flower garlands.

The young disciples of the temple then performed a devotional and cultural program in celebration of four momentous occasions: Shree Swaminarayan Temple - Bear, Delaware's 5th Patotsav, His Divine Holiness Acharya Swamishree's 77th Sadbhav Parva (Manifestation Day), Vachanamrut Dvishatabdi (200 years) Mahotsav, Jeevanpran Shree Abji Bapashree Shatamrut (175 years) Mahotsav. The program consisted of a devotional dance to Sadguru Shree Muktanand Swami's kirtan 'Lagni Lagi Re Mari,' a speech about Anandjibhai Sanghadiya of Mangrol village and having faith in the Lord and His Satpurush's words (vachan), singing of Jeevanpran Shree Muktajeevan Swamibapa's kirtan 'Jagat-na Sarva Grantho-ma Vachanamrut Granth Saro Chhe,' recitation of Gadhada First Section Vachanamrut 4, and a devotional dance to the kirtan 'Eva Krupalu Bapashree.' Young disciples then presented handmade birthday cards to Acharya Swamishree. Acharya Swamishree lovingly accepted all the cards and looked at each one individually before presenting the cards back as prasad along with a small gift to all the program participants. One young disciple had also created a glass painting for Acharya Swamishree. Acharya Swamishree was extremely pleased with all the shows of devotion and affection offered by the young disciples all throughout the evening. Thereafter, Acharya Swamishree cut a rosette cake to celebrate His 77th Sadbhav Parva before performing Sandhya aarti and niyams. Acharya Swamishree inaugurated the new cars of disciples and then departed for a padhramani at the home of a disciple, where they stayed the evening, and disciples all enjoyed mahaprasad downstairs.

The next morning, on Sunday, June 23rd, 2019, Acharya Swamishree was escorted into the temple, adorned in delightful vagha. He then performed the 5th Patotsav ceremony of Lord Shree Swaminarayanbapa Swamibapa at Shree Swaminarayan Temple – Bear, Delaware. The Murti Pratishtha at the temple and the Diamond Tula of Shree Harikrushna Maharaj felt like they were just yesterday; within the blink of an eye, five glorious years had already passed! Shodshopchar poojan was performed, a lavish annakut with cake and a variety of sweet and savory snacks and delicacies was offered to the Lord, and everyone offered aartis in celebration of the important milestone for the temple and disciples of Delaware and the surrounding Tri-State Area. Lord Shree Swaminarayan, Jeevanpran Shree Abji Bapashree, and Jeevanpran Shree Muktajeevan Swamibapa all lovingly bestowed their divine darshan from the sinhasan, adorned in new vagha and ornaments! From this sinhasan, they will continue to bestow their most divine darshan until the sun and moon shine! Acharya Swamishree then showered His divine blessings upon the entire congregation, during which he very affectionately recalled the prior evening's devotional performances and spoke about pure love (prem) unto the Lord. Acharya Swamishree bestowed His divine darshan upon all the disciples before departing for a series of padhramanis in Delaware in the afternoon, after which He then moved onto the state of Maryland. Disciples enjoyed mahaprasad to conclude the 5th Patotsav celebrations. They all now eagerly await the next time they will have Acharya Swamishree's divine darshan during His 2019 vicharan! 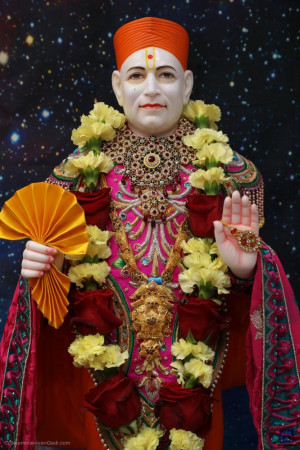 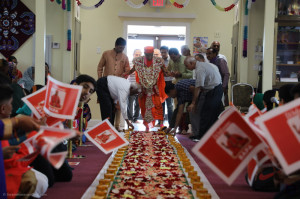 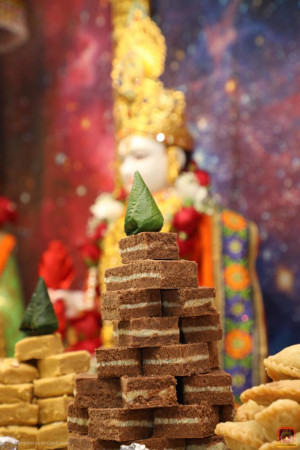 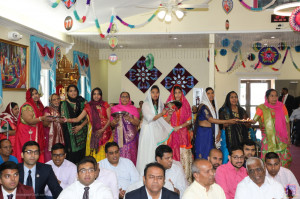 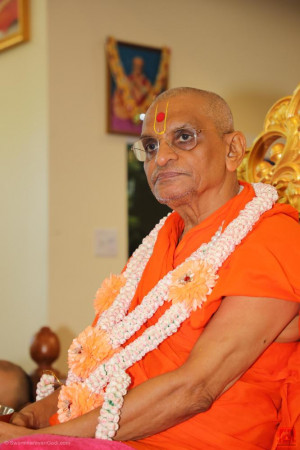 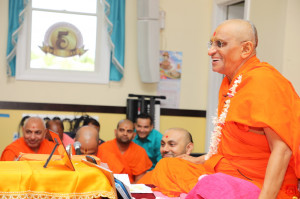