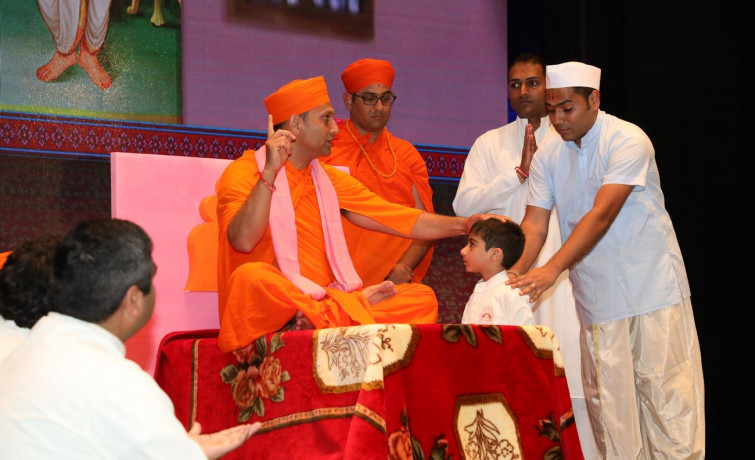 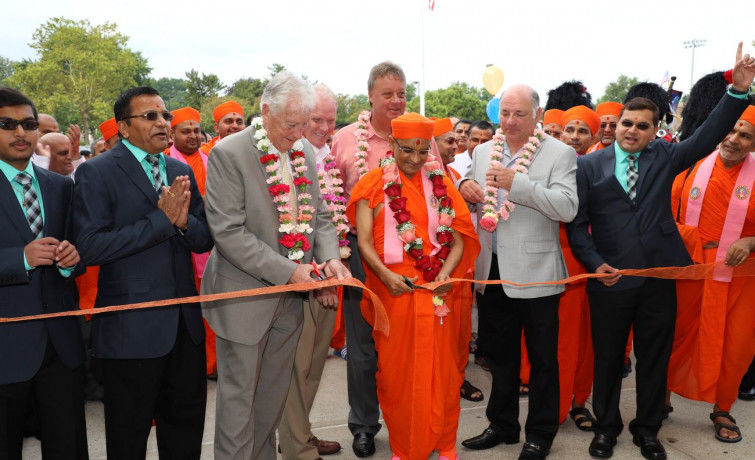 Friday, August 4th, 2017 marked the start of the Sadbhav Amrut Parva North America celebrations. Acharya Swamishree inaugurated the festivities with the opening of the Sadbhav Amrut Parva exhibit at Shree Swaminarayan Temple – Secaucus, New Jersey. The exhibit featured the divine darshan of Acharya Swamishree and captured His biography and momentous events from across North America in timeline format. Several of His personal belongings were also on display.

Shortly after, Acharya Swamishree arrived at Secaucus High School, the main venue for the celebrations, and He performed the flag-raising ceremony in the presence of local dignitaries. Members of Shree Muktajeevan Swamibapa Pipe Band U.S.A. played some patriotic songs as well as kirtans during the ceremony. Acharya Swamishree then inaugurated the friendly cricket tournament on the playing fields by batting the first ball.

Disciples enjoyed several different programs throughout the morning and afternoon, including a sports shibir and religious seminar, both in the presence of sants. Many disciples from all mandals across North America played each other in friendly cricket matches during the first part of the day while others participated in a religious speech forum in the auditorium. In the afternoon, sants discussed various religious topics in an open forum question and answer format in the gymnasium that was very much enjoyed by all disciples.

Women disciples and children also had their own respective programs throughout the day. The women held a religious trivia competition in the morning. The questions were based on six scriptures that all ladies were asked to read several months prior to the celebrations. Following the trivia, the ladies played several team-building games. In the afternoon, they held a special Mahila Cultural Program, where women of all ages from all mandals of North America performed various kirtans, devotional dances, and religious dramas to please Lord Swaminarayanbapa Swamibapa. Following the cultural program, they had a special ladies' samuh raas in the gymnasium. Children played various team-building and religious trivia games in a separate gymnasium throughout the day.

Breakfast, lunch, and dinner mahaprasad were served to all in the cafeteria. In the evening, Acharya Swamishree, sants, and all disciples came together for the “Mahima Stuti Gaan” program. The evening program featured devotional dances and speeches from disciples all eleven chapters of Maninagar Shree Swaminarayan Gadi Sansthan in North America. These were all part of an overall religious drama about Acharya Swamishree - everything in his biography from manifestation in Bharasar, to his childhood illness which was only cured by Jeevanpran Shree Muktajeevan Swamibapa Himself, to His taking sant-diskha at the tender age of nineteen, to His appointment as the Acharya of Shree Swaminarayan Gadi. Acharya Swamishree, sants, and disciples all enjoyed the evening program, which was a beautiful tribute to our Acharya Swamishree. After the conclusion of the evening, everyone looked forward to the main celebrations that would take place the next day.