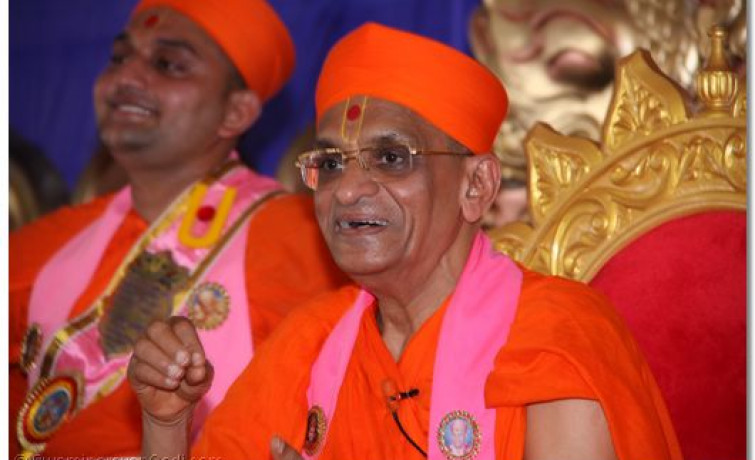 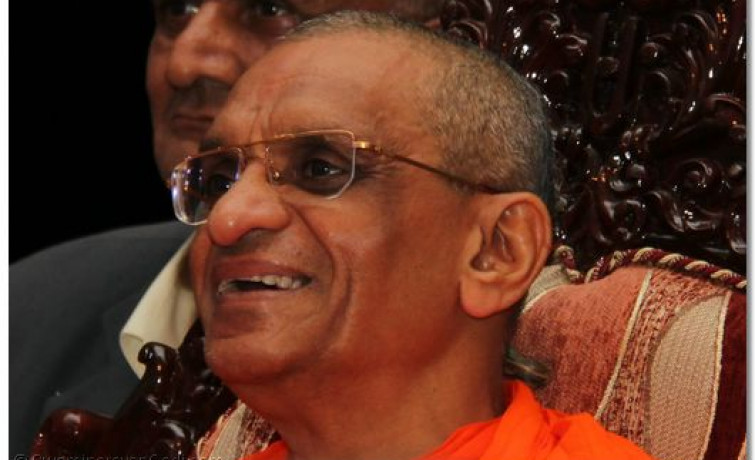 The third day of the Murti Pratishtha Mahotsav, July 30th, 2011, fell on Sadguru Din. In the morning, His Divine Holiness Acharya Swamishree continued to perform the auspicious yagna ceremony inside the new temple. Afterwards, He was seated on His chariot and led from the temple to the sabha mandap in a swagat yatra led by Swamibapa Pipe Band. Once inside, everyone was seated, and a dhoon and dhyaan session were held in honor of Sadguru Din.

The Swaminarayan Gadi Granth scripture recitals were then concluded. Parayan and murti sponsors took chaabs of offerings up to Acharya Swamishree, and they all performed aarti. Acharya Swamishree then gave His divine ashirwad.

Acharya Swamishree explained the importance of Sadguru Din. He stated that it is extremely important to only take virtues from others and to leave the flaws. This helps strengthen the soul. To earn the Lord’s happiness, one must earn the capacity first by performing adoration and mediation, singing kirtans, and reading and listening to religious discourses. Then one must recite them in order to achieve sakshatkar -  His murti. We should always put the Lord before worldly social affairs. There is no ban on them as long as they are secondary to the Lord. Our devotion should be such that it inspires others to join the Satsang. Everything that exists or happens in the universe is merely due to the Lord’s will, not because of one’s individual strength.

Acharya Swamishree also announced the establishment of yet another mandal in the United States - Shree Swaminarayan Siddhant Sajivan Mandal Mid-Atlantic, U.S.A., which consists of the states of Pennsylvania, Delaware, southern New Jersey, and the District of Columbia (Washington, D.C.).

Once Acharya Swamishree’s Ashirwad were concluded, Jayantibhai Patel, caretaker of Chicago’s Hari Mandir for the past ten years, and his family members were presented with paags and saals. His and his family’s hard work and dedication to the temple are extremely appreciated.

Shortly afterwards, Acharya Swamishree was escorted out of the sabha mandap. He consecrated the morning’s maha-prasad, which was then served to everyone present.

After the lunch break, His Divine Holiness Acharya Swamishree presented parayan and murti sponsors with Murti Pratishtha momentos. It was also decided who would perform the first aartis after the idol installation ceremony, raise the flags on the temple’s sikhars, and conduct the opening ceremony for Swamibapa Community Hall upon its completion with Acharya Swamishree. Dinner maha-prasad was then served. Acharya Swamishree performed daily Sandhya Aarti niyams inside the temple.

Everyone then filed back into the sabha mandap for the night program. Young disciples from Chicago performed a prathna dance to the kirtan “Hum Bhakto Ka,” and disciples from Shree Swaminarayan Temple New Jersey performed a religious drama titled “Satsangthi Shobe Sanskar.”

In this drama, irreligious people living in a village in India strongly reject the teachings of Lord Shree Swaminarayan and His sants and ridicule those who follow these teachings. A young man living in the United States also rejects these teachings; meanwhile, his friend from India who seeks work with him in the US is an ardent disciple. Along the way, these irreligious people experience severe problems in their lives. An alcoholic’s wife dies, a fake religious leader and his followers get arrested, and the man in the United States goes blind. In the end, all of these people come for the Swaminarayan sants’ darshan and help. Once they accept the true religion, their lives instantly become better, and their problems go away. The moral of the drama was that following the Swaminarayan religion allows one to live a pure and happy life. One’s devotion to the Lord pleases Him, and in return, one achieves peace, happiness, and respect in his life. The Lord rewards those who have faith in Him.

After the drama, Acharya Swamishree was escorted out of the sabha mandap, and everyone went home for the night before the final day of the Mahotsav.