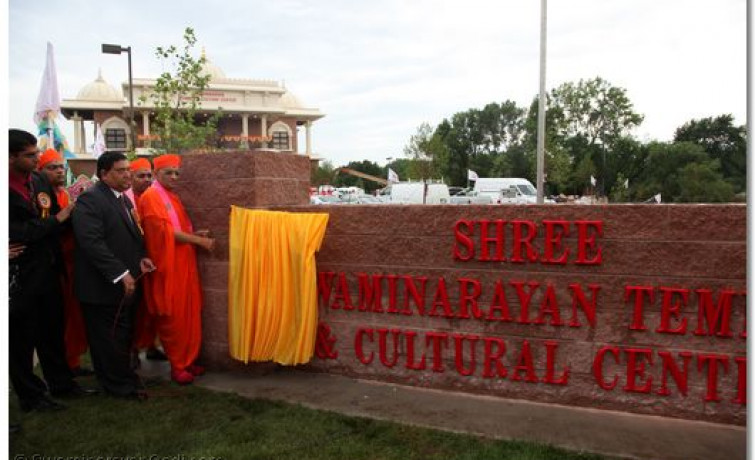 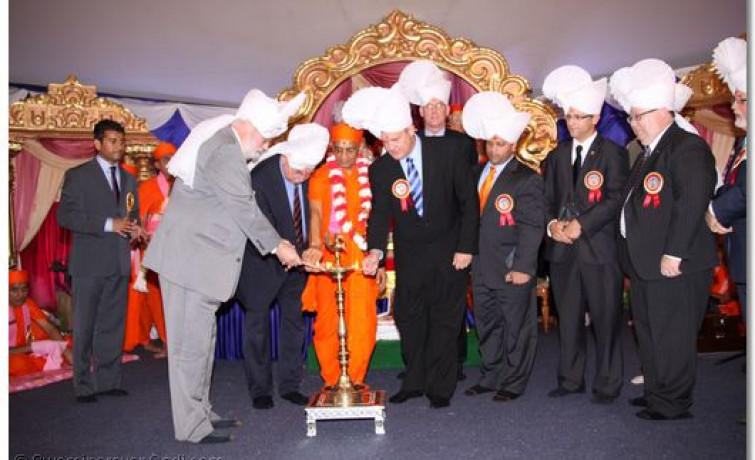 It has been five years since the ground-breaking ceremony for Shree Swaminarayan Temple and Cultural Center Chicago, and the long-awaited Murti Pratishtha Mahotsav has finally arrived. After nine months of construction, two of which sants helped tirelessly in; one week of day and night preparation for the Mahotsav celebration – sabha mandap tent set-up, decorations, etc.; and the long sought-after permit for His Divine Holiness Acharya Swamishree and sants to stay in the temple during the four days of the Mahotsav being granted literally the day before the Mahotsav, Shree Swaminarayan Temple Chicago was ready for the installation of the divine idols of Lord Swaminarayanbapa Swamibapa.

The celebrations began on Thursday, July 28th, 2011. A swagat yatra (procession) was held from the main entrance of the temple to the sabha mandap. Hundreds of disciples from all over the world – Canada, United Kingdom, Kenya, India – and of course, from all parts of the United States had come to Chicago for this magnificent festival, and many had all gathered for His Divine Holiness Acharya Swamishree’s divine darshan during the swagat yatra. Acharya Swamishree was seated upon an intricately-decorated chariot, and sants and disciples walked alongside Him during the procession. Swamibapa Pipe Band from Shree Swaminarayan Temple New Jersey led the procession to the sabha mandap, where everyone was then seated and Acharya Swamishree took His place on His gadi on stage. The scripture recitals of Shree Swaminarayan Gadi Granth were then held, and afterwards, Acharya Swamishree showered His divine blessings upon the entire congregation.

In His divine ashirwad, Acharya Swamishree first allowed us to keep those who were not able to attend this much-awaited festival in our thoughts and prayers during the celebrations. He commented on the hard work the sants and disciples had put into making this Mahotsav possible and how the Lord is very pleased with them. Acharya Swamishree then went on to explain that one’s mind should stray or wander while performing adoration and meditation and while listening to religious discourses. One should keep all His indriyas and antah-karans in check to please Lord Shree Swaminarayan. The new temple is located in the state of Illinois. Acharya Swamishree broke the name Illinois down to its simplest form – ill-i-no-is, meaning, “I am not ill at heart and mind.” He also stated that the Supreme Lord Shree Swaminarayan does not see if one is rich or poor; He gives His divine blessings to all who come for His darshan, and He is extremely pleased with one who does seva and performs devotion with a pure and pious heart.

With torrential downpour the night before and a gray morning with light showers, many did not think they would see sunshine or escape without getting wet during the nagaryatra. However, by 4 PM, as everyone gathered by Madhav Kendra for the start of the parade, the sun was out, and not a single gray cloud was in the sky. The weather stayed like this for the entirety of the procession. Lord Swaminarayanbapa Swamibapa was undoubtedly present for the grand procession towards His new home in Streamwood, Illinois.

Swamibapa Pipe Band led the procession through the streets of Streamwood, Illinois. The divine murtis of Lord Shree Swaminarayan and His divine lineage were seated on a grand chariot with Sadguru sants, and His Divine Holiness Acharya Swamishree and Jeevanpran Shree Muktajeevan Swamibapa were seated on another magnificent chariot that followed. Young disciples from Chicago and New Jersey performed devotional dances to kirtans behind the chariots, and hundreds of disciples from all over the world walked in the procession singing praises of the Lord. Many local residents came out of their homes to gaze at the procession, the likes of which they had never seen before. They snapped photos on their cameras and phones and recorded videos with their camcorders. Many stopped in their cars and looked out their windows. Lord Swaminarayanbapa Swamibapa and Acharya Swamishree bestowed their divine darshan upon them all.

After two hours, the mile-long procession finally came to an end at the front of the beautiful magnificent new temple. Its grandness was even more visible in the sunshine. Acharya Swamishree threw out candy to disciples, and the nagaryatra sponsors performed the welcoming back ceremony (punkhvaanu) to Acharya Swamishree and Muktajeevan Swamibapa. Acharya Swamishree then descended from the chariot and was escorted to the top of the temple steps, from which He gave His divine darshan one last time before heading back inside the temple.

Shortly afterwards, everyone was served maha-prasad, and this concluded the first day of the Murti Pratishtha Mahotsav of Shree Swaminarayan Temple and Cultural Center Chicago.