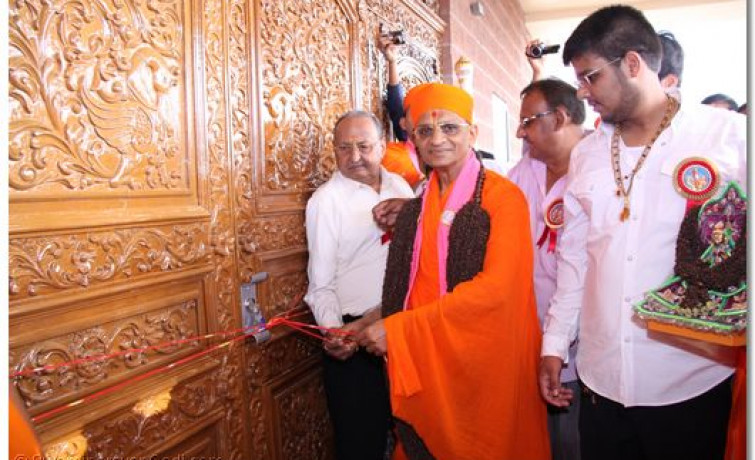 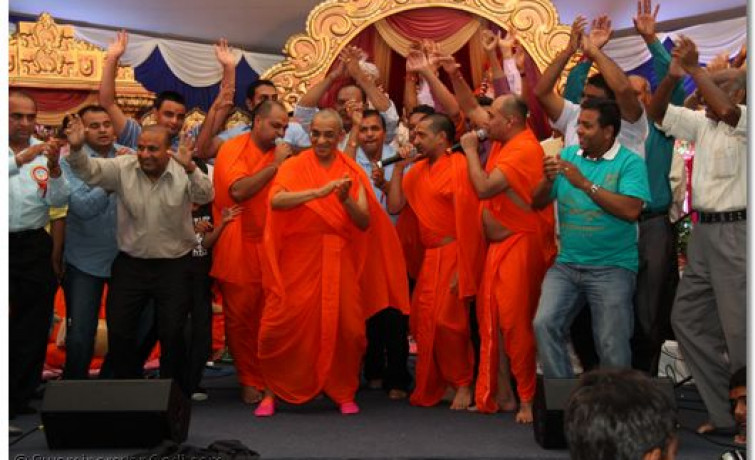 The celebrations continued on Friday, July 29th, 2011. At 7:30 AM, disciples eagerly waiting outside the temple were allowed in through the main doors to gaze upon the new murtis of Lord Swaminarayanbapa Swamibapa and the intricately-carved golden sinhasan.

Acharya Swamishree then bestowed His divine blessings upon the congregation. Acharya Swamishree said it is necessary to have love and affection while performing devotion. Just as a glass of milk is good to one’s health, love and affection is good to a stronger soul. It is this love that brings one closer to the Lord. A person with love for the Lord has a constant remembrance of His murti. Through one’s associations with a Sat-Purush, a firm love for the Lord develops. If a person has the same love for the Lord as he has for his relatives, then it is called unconditional love. If this love is combined with an understanding of His glory, it is even greater. Shreejimaharaj states that if someone has love for the Satsang, aspects of his nature that are inappropriate are eliminated. A person who keeps his inclinations in check is considered to follow the Yog Yagna, and the person who joins all their inclinations in the service of the Lord and His Sat-Purush is said to follow the Gnan (knowledge) Yagna. A state of Anadi Mukta is attained if a disciple incessantly keeps one part of his inclination with love, and the other part of his inclination with thoughts, on the murti of the Lord.

After Acharya Swamishree’s ashirwad, the establishment of another mandal in the United States of America – Shree Swaminarayan Siddhant Sajivan Mandal Southeast, USA, was announced. This mandal consists of disciples living in the southeastern states of Tennessee, Kentucky, Georgia, and Alabama.

Acharya Swamishree was then escorted out of the sabha mandap to consecrate the maha-prasad, which was then served to everyone afterwards. This concluded the morning portion of the second day of the Mahotsav.

In the late afternoon, samuh parayans were held on stage in the sabha mandap, and the scripture recitals continued. Maha-prasad was served around 6 PM, and at 8 PM, everyone filed back into the sabha mandap for the night program.

Acharya Swamishree was escorted onto the stage, and then, disciples from New Jersey performed a welcoming dance “Swamishree Tum Ho Nyaare.” Dozens of disciples carrying spears, drums, and swords filled the mandap, starting the night off with excitement.

Acharya Swamishree was then escorted onto the floor, and a group of sants performed kirtans-bhakti, singing praises of Lord Swaminarayanbapa Swamibapa. Kirtans included “Nirkhya Re Ghanshyam,” “Prem Chhe Prabhu Prem Chhe,” and a USA favorite from 2010, “Kem Kari Bhulai.” Sants then began to sing “Swamibapa Na Poira,” and disciples, one by one, began to fill the stage and dance along. The sants then transitioned into the kirtan “Swamibapa Pranthi Pyaara,” and Acharya Swamishree was so filled with joy, He got up from His seat and joined His beloved sants and disciples on stage and began to dance.

After the bhakti sandhya performances, disciples from all across the United States – Chicago, Cleveland, Detroit, Florida, New Jersey – performed a wonderful variety of devotional dances to please the Lord and Acharya Swamishree. Many of these young disciples had performed for the very fist time, and they all did an excellent job.

That night, all of these disciples, all children of Shree Swaminarayan Gadi Sansthan and all very loved by Lord Swaminarayanbapa Swamibapa, had truly pleased Him and Acharya Swamishree.