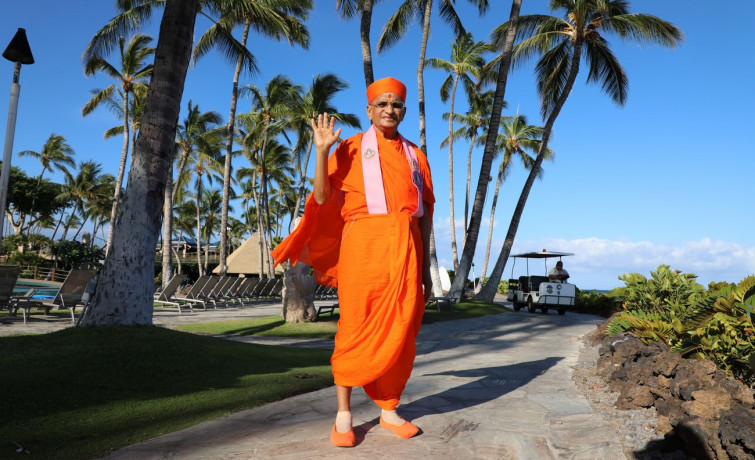 His Divine Holiness Acharya Swamishree Purushottampriyadasji Maharaj is the first leader of the Swaminarayan Faith to grace and sanctify the beautiful islands of Hawaii, the fiftieth state of the United States of America. From Sunday, June 25 through Friday, June 30, 2017, Acharya Swamishree, a mandal of twenty-six sants, and disciples partook in a week-long vicharan and spiritual retreat of the Big Island of Hawaii, a continuation of the Sadbhav Yatra, which commenced in Australia and East Asia earlier in the month. Disciples from S.S.S.S.M. West-Coast had been planning the various aspects of this retreat for over one year, and divinity experienced by all who were blessed to partake in this vicharan will be treasured by them forever.

Throughout the five days of the vicharan, Acharya Swamishree, sants, and disciples performed daily aartis, niyams, and sabha at the resort. They also participated in various excursions on the Big Island, including a beach picnic and breakfast on Anaeho'omalu Beach, an afternoon snorkel sail off the Kohala Coast featuring scuba-diving amongst the colorful tropical fish and natural coral reef, a visit to Punalu'u Black Sand Beach (home of Hawaiian green sea turtles), a tour of Volcanoes Natural Park, and a Big Island helicopter tour featuring an aerial view of the continuously-erupting Kilauea Volcano (Hawaii's most active volcano that has been erupting since January 1983) as well as the lush rain forests, deep valleys, and gorgeous waterfalls throughout the interior of the Big Island. Throughout these excursions, Acharya Swamishree showed His divine leela, interacting with the indigenous flora and fauna of Hawaii and performing dhyaan during various parts of the tours - whether it be while sailing on a boat or while sitting in a shuttle. He also bestowed His divine darshan to all sants and disciples throughout the vicharan.

The Sadhbav Yatra Hawaii was a one-of-a-kind vicharan. Acharya Swamishree displayed amazing, divine leela throughout the tour, and all disciples enjoyed the once-in-a-lifetime chance to spiritually retreat with Acharya Swamishree and sants in a location that is truly one of the Lord's most magnificent natural creations on this planet. The blissful experiences and memories from this vicharan will be treasured by all. 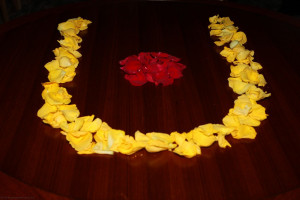