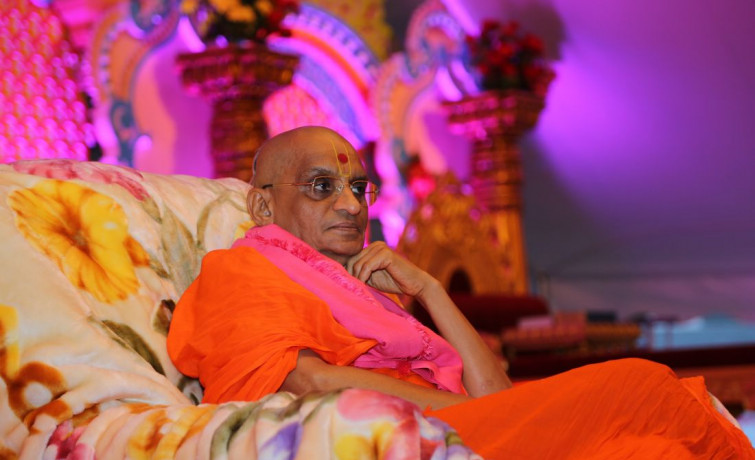 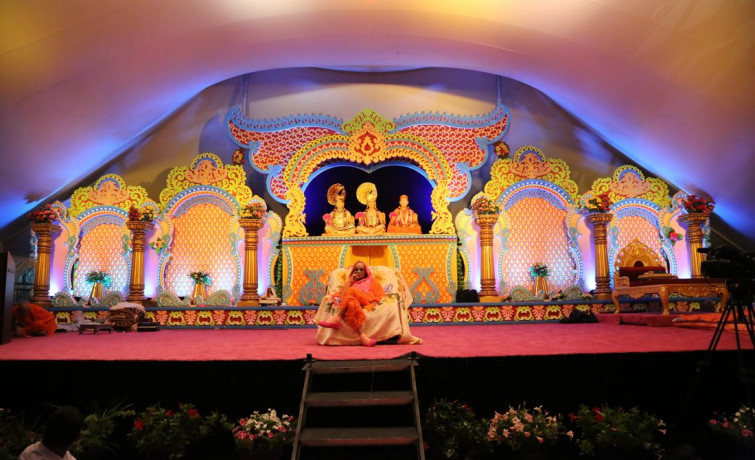 July 4th, as we all know, is a very special day for the United States of America, as it marks the day America declared independence from Great Britain’s rule as a standalone nation. However, Friday, July 4th, 2014, was extra special for the disciples of Maninagar Shree Swaminarayan Gadi Sansthan residing in the Mid-Atlantic region of the United States and all over the world. This day marked the first day of a magnificent three-day festival celebrating the grand opening and Murti Pratishtha Mahotsav of Shree Swaminarayan Temple in Bear, Delaware as well as the Diamond Tula of Shree Harikrushna Maharaj. On this day, His Divine Holiness Acharya Swamishree, sants, and disciples from all over the world declared that Lord Shree Swaminarayan, Jeevanpran Shree Abji Bapashree, and Jeevanpran Shree Muktajeevan Swamibapa would shortly be arriving to Delaware to make Shree Swaminarayan Temple Delaware their newest eternal abode, and celebrations leading up to their arrival have commenced.

At 3 PM, sants and disciples gathered in the splendid tent that had been erected and decorated for the Mahotsav. Thanks to the hard work and collaboration amongst all mandals and disciples in the United States, a beautiful, intricately-decorated stage had been set up, and red, white, and blue balloons, stars, and banners lined the tent’s perimeter for the celebrations. Disciples of Shree Swaminarayan Temple Delaware were all wearing red, white, and blue sarees, cholis, and outfits with stars to express their joy on this very special 4th of July.

Mr. Chris King of the Christiana Fire Company was then welcomed by Acharya Swamishree, sants, and the congregation. Mr. King received blessings, prasad paag and saal, flower garland, chandlo, box of prasad from the temple, and crystal memento made especially for the Mahotsav from Acharya Swamishree. Acharya Swamishree also presented a $1500 donation in the form of an enlarged check to Mr. King for the Christiana Fire Company on behalf of the temple congregation and Maninagar Shree Swaminarayan Gadi Sansthan. The donation was made in order to honor the Christiana Fire Company, a great community supporter of the temple, for dedicating their own lives to selflessly saving the lives of others and also to commemorate all United States military personnel, veterans, and service members on the 4th of July.

Before proceeding to enter the temple, Acharya Swamishree released orange, white, and green (Indian flag colors) balloons as well as red, white, and blue (American flag colors) balloons into the air. Sants and disciples cheered around Him as He did so. Releasing balloons in the colors of both Indian and American flags together is symbolic of the fact that even though we all reside in different nations and may practice different faiths, we are all one world and one people. Just as these balloons exemplifying the togetherness of two nations fly through the air, Acharya Swamishree prayed that the message of peace, unity, and morality fly through all parts of the world.

Shortly thereafter, Acharya Swamishree performed sandhya aarti inside the temple, and everyone partook in niyams. This concluded the afternoon portion of the first day of celebrations, and mahaprasad was then served to all outside the temple before the evening’s program.

Friday evening, young disciples from all across the United States were given the opportunity to showcase their God-given devotional talents to Lord Shree Swaminarayan, Jeevanpran Shree Abji Bapashree, Jeevanpran Shree Muktajeevan Swamibapa, and His Divine Holiness Acharya Swamishree. After mahaprasad, Acharya Swamishree, sants, and disciples all gathered back in the sabha mandap for the evening devotional and cultural program.

The evening commenced with devotional singing (kirtan) performances by the young ladies of Shree Swaminarayan Temple Delaware. They recited our mahamantra to start off their performances and then followed with four different kirtans: “Man No Moraliyo Rate Taru Naam, Aavo Mandire Pyara Ghanshyam,” “Aavyo Aaje Anupam Avsar Aa,” “Aaj Avsar Anmol Rudo Aaviyo Re Lol,” and a custom version of “Shreeji Thank You, Bapa Thank You” specific to the Murti Pratishtha Mahotsav and Diamond Tula of Shree Harikrushna Maharaj. Young boys provided keyboard and tabla accompaniment to the singing.

The Lord and Acharya Swamishree’s blessings were with all of the disciples throughout the night, and everything went smoothly for a pleasant evening. Uproar of cheering from the crowd followed each and every singing and dance performance.

At the end of all of the performances, Acharya Swamishree blessed all of the disciples who partook in pleasing the Lord that evening. He thoroughly enjoyed all of the performances throughout the night. It was evident in His eyes and smile that He was truly pleased to see how much love for the Lord, devotion, and talents in the disciples of the United States have grown since Gurudev Jeevanpran Shree Muktajeevan Swamibapa’s visit to the United States in 1970 and since the opening of the first temple in the United States, Shree Swaminarayan Temple New Jersey, in 2001.

After a few announcements, Acharya Swamishree was escorted out of the sabha mandap, and this officially concluded the evening’s program. All disciples were then served kulfi to end their evening on a sweet note before heading home to rest for the next day’s celebrations. With Lord Shree Swaminarayan, Jeevanpran Shree Abji Bapashree, Jeevanpran Shree Muktajeevan Swamibapa, and Acharya Swamishree’s blessings, the first day had been a memorable success. 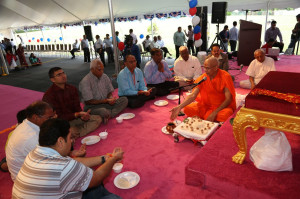 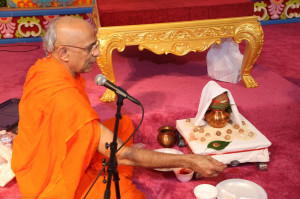 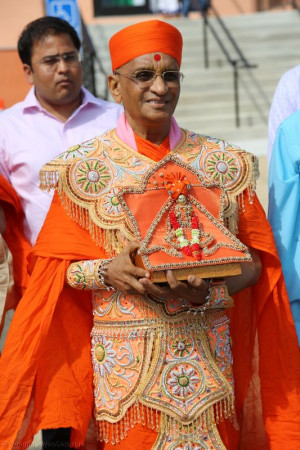 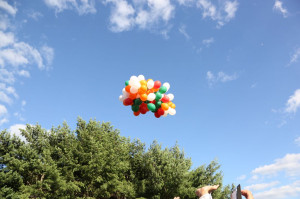 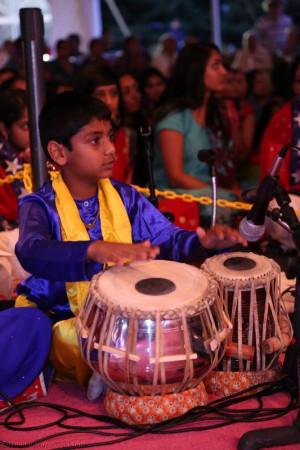 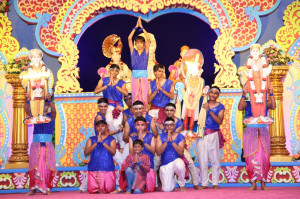