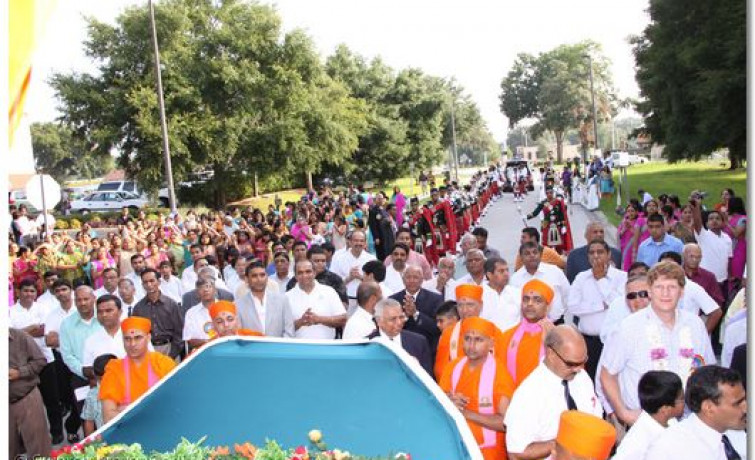 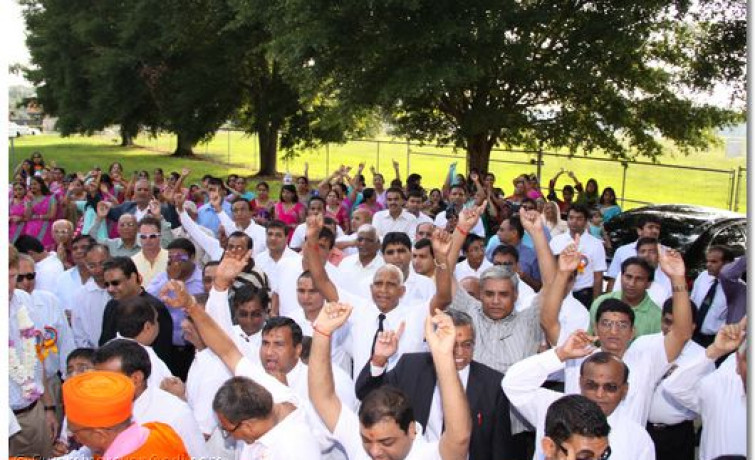 Inspired by His Divine Holiness Acharya Swamishree, a three-day celebration from Friday, July 9th through Sunday, July 11th, 2010 was held in Ocala, Florida in the presence of Acharya Swamishree and sants for the ground-breaking ceremony of the new temple. This temple will be the third sikhar-bandh temple to be built in the United States. Hundreds of disciples from all over the United States had traveled to Florida to attend the celebration.

Friday evening, disciples gathered at the Indian Association Hall of Ocala for prasad. Acharya Swamishree and sants then arrived for the night program. Sants performed kirtan-bhakti, and accepting a special request from disciples, they performed “Maare Jaavu Chhe Shreeji Dhaam” at the end. The entire congregation sang and clapped along. This was followed by samuh-raas. Sants and disciples danced the night away to “Rase Rame Rasilo” as Shree Muktajeevan Swamibapa and Acharya Swamishree bestowed Their divine darshan from the center. Near the conclusion of samuh-raas, Acharya Swamishree got up and danced as everyone gathered around Him for His divine darshan.

Scripture recitals of Shree Abji Bapashree Ni Vaato were held Saturday morning. Acharya Swamishree then showered His divine blessings upon the congregation. Following ashirwad, prasad was served to all. This concluded the morning portion of the second day of the celebration.

Everyone gathered back at the hall later in the afternoon. Swamibapa Pipe Band led Acharya Swamishree, sants, and guests of honor from the parking lot into the hall. Guests included Larry Cretful – Speaker of the House of Representatives for the state of Florida, Randall Ewers – Mayor of Ocala, Digvijaysingh Gayakwad – a renowned businessman in Florida, and several other dignitaries. Each of the guests offered a few words to the congregation about how delighted they were to have a new temple being constructed in Ocala and how great it will be for the community and the state of Florida. They were also extremely pleased to receive Acharya Swamishree’s divine darshan. Larry Cretful also presented Acharya Swamishree with a quilt with the seal of the Florida House of Representatives, a very prized gift to bestow. Following the guests’ speeches, everyone was once again served prasad.

Immediately after prasad, the congregation gathered once more for the day. Acharya Swamishree and sants were led into the hall by disciples, and then young disciples from New Jersey and Florida put on a cultural program to please Lord Swaminarayanbapa Swamibapa and Acharya Swamishree. The program was comprised of a variety of devotional dances, including a bamboo dance, a qawali, a raas, and a chair dance. Disciples from New Jersey also performed a religious drama titled “Prabad Pratap Maha Mantra No.”

In this drama, a prosperous landowner, who is conceited and has no regard for others, goes blind one day. Many people of different faiths visit him, and each offers him a mantra to recite that they believe will cure his blindness. None of these mantras work, except the one offered to him by sants of Shree Swaminarayan Gadi Sansthan – “Ohm Shree Swaminarayanbapa Swamibapa Bhagvate Namaha.” The landowner recited this mantra for only one month, compared to the others which he recited for six months or more, and Lord Shree Swaminarayan appeared in His divine form at the landowner’s home, cured the man of his blindness, and then gave him His darshan. This drama exhibited how powerful the Swaminarayan mantra truly is. It can cure you of any problem and can help you face any struggle you may encounter – even something typically incurable such as blindness.

Sunday was the day everyone had been eagerly waiting for – the day Acharya Swamishree would break ground and lay the foundation for Ocala, Florida’s new temple. Swamibapa Pipe Band led a procession through the local streets of Ocala, from the Drag Racing Museum to the temple site. During the procession, Acharya Swamishree, Jeevanpran Swamibapa, and Sadguru sants were seated upon a decorated chariot.

As the procession was passing a farm, a horse was grazing in his corral. As soon as it saw Jeevanpran Swamibapa and Acharya Swamishree seated on the chariot, it came closer to the roadside, stood still, and patiently gazed upon their murtis. As soon as the horse received Their divine darshan, it started to gallop around its corral very fast in circles. The horse continued to do this as the entire procession passed by. Immediately after the end of the procession passed by the horse’s corral, it stopped running and resumed grazing. Even animals are pleased when they receive Jeevanpran Swamibapa and Acharya Swamishree’s darshan.

The procession reached the temple site, and Acharya Swamishree then performed poojan to the murtis that were to be placed in the temporary hari-mandir. Following this, He performed the ground-breaking ceremony for the new temple. He laid down the first few bricks for the temple’s foundation, and disciples did the same after Him.

Throughout the procession and the ceremonies, the sun was beating down, and it was extremely hot outside. By the Lord’s grace, it rained immediately after Acharya Swamishree completed the ground-breaking ceremony, and the temperature cooled down significantly. Acharya Swamishree, sants, and disciples were running around in the rain, trying to get under the tent and other dry areas, but at the same time, they were enjoying themselves while getting wet. As disciples settled down in the tent built for the sabha, Acharya Swamishree and sants performed the murti installation ceremony for the temporary hari-mandir on the new temple site. This temple will serve as a common gathering place for disciples in Florida each Sunday, on Ekadashi, and on major religious holidays until the new temple is ready.

Acharya Swamishree then sat upon His Gadi, and sants sat down on either side of Him on stage. He then began to shower His divine blessings upon the congregation. In His divine ashirwad, Acharya Swamishree explained how Lord Shree Swaminarayan is extremely pleased by devotion through which disciples show their love for the Lord.  Each disciple should do as much “seva” as he or she can in order to receive His divine blessings. One should always remember that seva and other tasks are performed to please God and not for self-pride. Everyone should work together and put ego aside. Ego is destructive, and it will drive a disciple out of the satsang.  Acharya Swamishree also explained the importance of building temples. A temple is a doorway to devotion and, therefore, a doorway to the Lord. It brings disciples closer to the Lord, and it helps them grow in the satsang by performing seva to achieve eternal salvation.

Acharya Swamishree’s wonderful ashirwad concluded the three-day celebration for the ground-breaking ceremony for the new temple in Ocala, Florida. The sun was out once again, but the temperature was much cooler thanks to the rain brought down by the Lord, and everyone was served maha prasad outside the sabha tent. All in all, everyone was extremely pleased with the event. 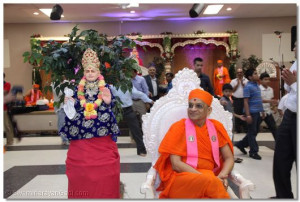 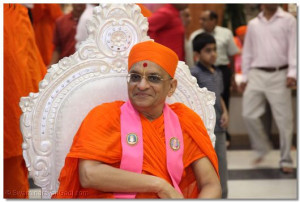 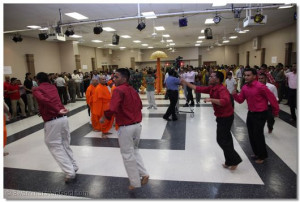 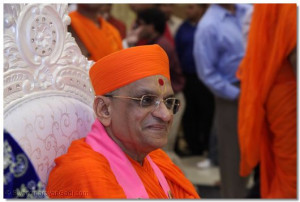 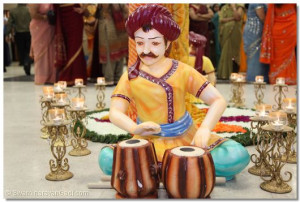 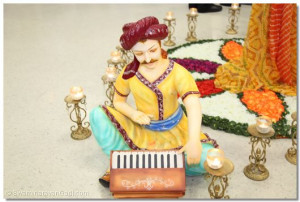