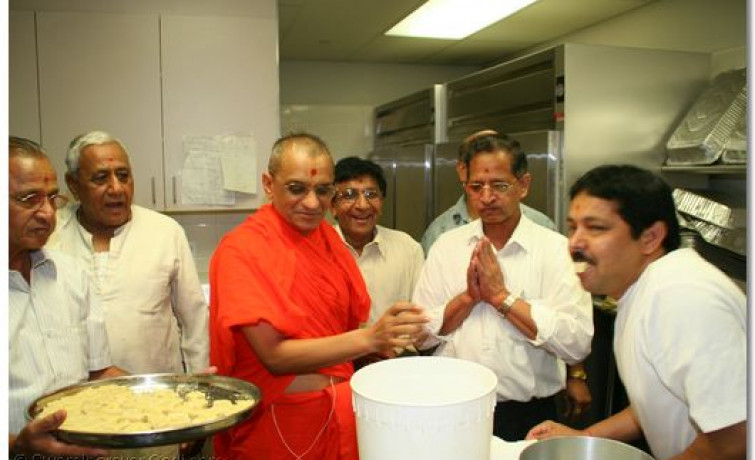 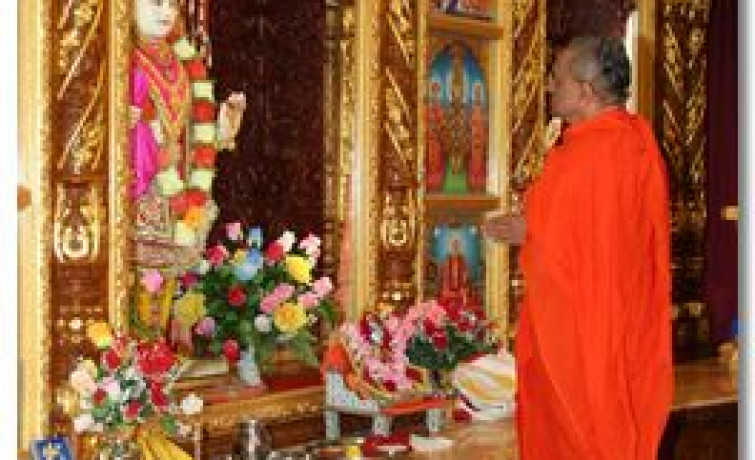 In the presence of His Divine Holiness Acharya Swamishree, a three-day celebration was held at Shree Swaminarayan Temple Secaucus, New Jersey for the auspicious 5th anniversary of the installation of the divine idols of Supreme Lord Shree Swaminarayan, Jeevanpran Bapashree, and Jeevanpran Swamibapa.

The celebrations commenced on the afternoon of Friday August 4th, with the recital of Shree Abji Bapashree ni Vato scripture. Following the reading, Acharya Swamishree showered all of the disciples with His divine blessings. In His ashirwad, Acharya Swamishree mentioned that if a person does not control his speech and does not watch what he says, friends can be turned into enemies. Acharya Swamishree also spoke of staying away from vices which lead a person farther away from the Lord and mar his life.

Later that evening, young disciples performed devotional dances to please the Lord. To conclude the night, Samuh-Raas was held, in which all the sants and disciples participated.

On the morning of Saturday August 5th, Swamibapa Pipe Band led Acharya Swamishree into Shree Muktajeevan Swamibapa Community Hall to open and mark the beginning of a medical camp. Over 175 disciples and neighbouring community members were given the opportunity to get free physical, dental, vision, and EKG check-ups as well as blood work completed. Acharya Swamishree also marked the start of a blood drive where many disciples donated blood to benefit the saving of others’ lives. Many disciples of the temple and doctors from the Indian community volunteered their time to help with the medical camp and blood donation drive. The medical camp and blood drive were successful events as they have always been.

While the medical camp and blood drive were occurring, Acharya Swamishree presided over the recital of the divine scripture, Shree Swaminarayan Gadi. He then gave His divine ashirwad to all of the disciples.

At the conclusion of Acharya Swamishree’s ashirwad, a guest speaker from the Organ and Tissue Donor Sharing Network was invited to provide information about how to become an organ donor. Acharya Swamishree strongly encourages organ donation because it is a way to give the precious gift of life to a person even after one’s own death. After that, Maha-Prasad was served to all of the disciples who were present.

Later in the afternoon, Acharya Swamishree, with His kind and loving nature, made it possible for His disciples in America to partake in a Rang-Utsav held for the very first time in the U.S.A. First Acharya Swamishree bathed the Lord in colored water and powder. Then He showered all the sants and disciples with the colored water as well. This colorful and blessed event bestowed indescribable happiness to the hearts of all the sants and disciples. Everyone, from children to senior citizens, was smiling from ear to ear. Such an event will be remembered for a lifetime.

On Saturday evening, young disciples performed devotional dances and kirtan-bhakti in Shree Muktajeevan Swamibapa Community Hall. Afterwards, a special religious drama titled “Vyesan Vere Vinaash” was performed. The moral of the drama was to keep away from negative influences such as drinking alcohol, doing drugs, and gambling. One should stay away from so-called “friends” who encourage such negative behavior, as they will lead to the destruction of moral values taught by our Swaminarayan religion. This type of lifestyle will surely destroy one’s life and the lives of loved ones. The drama ended the second day of the celebrations.

Sunday August 6th was the final day of the 5th Patotsav. Acharya Swamishree performed the Patotsav ceremony before Lord Swaminarayanbapa Swamibapa. He also conducted the flag-raising ceremony on the temple’s sikhars. Upon returning into the temple after raising the flags, Swamibapa’s talented sants  had already assembled a magnificent ankoot to be offered to the Lord. Afterwards, Acharya Swamishree, sants and disciples offered aarti to the almighty Lord. Following shortly, Swamibapa Pipe Band escorted Acharya Swamishree into Shree Muktajeevan Swamibapa Community Hall where hundreds of disciples were eagerly awaiting for His Divine Holiness Acharya Swamishree’s blessings. Acharya Swamishree did indeed shower his blessings, and thus fulfilled the disciples’ wishes. In His ashirwad, Acharya Swamishree spoke of being an ardent disciple and a good citizen from the very beginning, as a strong foundation makes a person less prone to the vices than does a weak foundation. A person with a strong foundation will be a good person and will lead a happy life. Contrary to that, a person with a weak foundation will eventually crumble, and his life will be ruined. 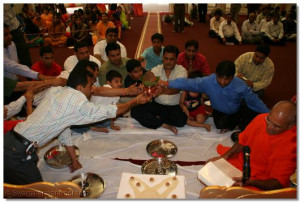 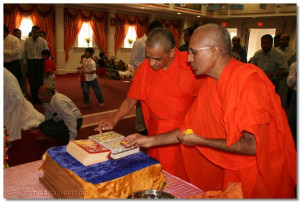 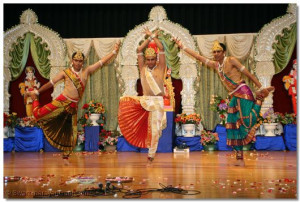 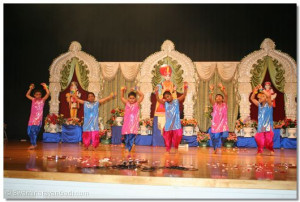 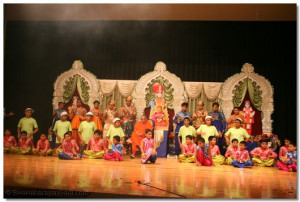 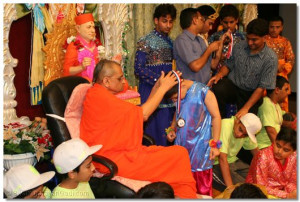