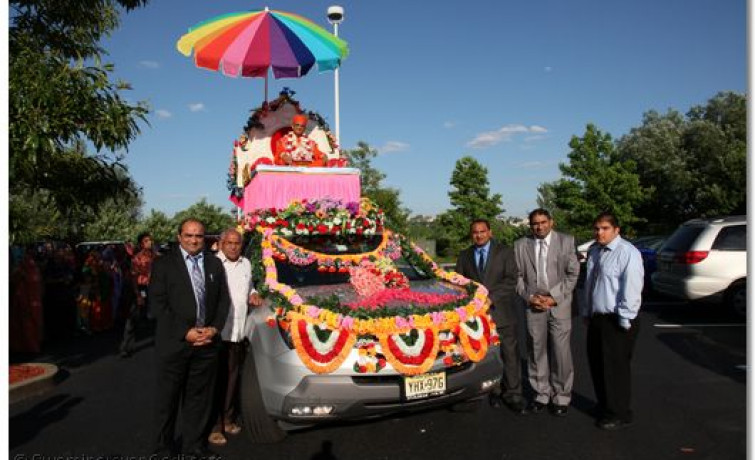 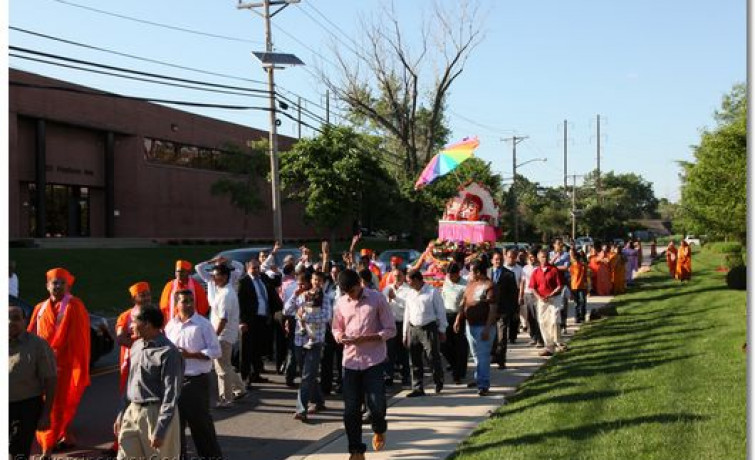 The day that disciples of Shree Swaminarayan Gadi Sansthan residing all across the United States had been eagerly waiting for had finally arrived. His Divine Holiness Acharya Swamishree and a mandal of seventeen sants arrived in the United States on the afternoon of Wednesday, May 30th, 2012 for their 2012 North American Tour. After a nearly 20-hour flight from India, Acharya Swamishree and sants descended at Newark International Airport around 1 PM on Wednesday. As Acharya Swamishree walked out from the plane, this marked the 25th anniversary of Acharya Swamishree stepping foot on American soil as Acharya of Shree Swaminarayan Gadi Sansthan in 1987. Acharya Swamishree was greeted by many disciples from all over the Northeast region as well as Honorable Mayor of Secaucus, Michael Gonnelli, who had all come to the airport for His divine darshan as He emerged through the terminal gates. Disciples were cheering and smiling from ear to ear. Their sheer happiness was evident through their twinkling eyes as they gazed upon Acharya Swamishree.

Disciples then presented the Swaminarayan Gadi Sansthan Talent Competition (SGS Talent Competition), where disciples of all ages will be able to compete in the categories of bhakti soor (devotional singing), bhakti nrutya (devotional dancing), dharma gnan (religious knowledge), and musical instruments for gold, silver, and bronze medals. This competition will take place from August 1st through August 4th, and all disciples from all the mandals of the United States are encouraged to participate to please the Lord through these types of devotion. Acharya Swamishree inaugurated the website page for the SGS Talent Competition, and registration was then open. Competition registration will close on June 10th.

Afterwards, Swamibapa Pipe Band escorted honored guests from the local community into the temple. These guests included Secaucus Mayor Michael Gonnelli and Secaucus Councilmen Robert Constantino and Gary Jeffas. New Jersey Congressman Steve Rothman was very excited to come to the temple for Acharya Swamishree’s darshan but was unable to make it do to an important congressional meeting in Washington, D.C. He sent flowers, a certificate of honor, and a very heartfelt message for Acharya Swamishree. These were presented to Acharya Swamishree by Mayor Gonnelli on behalf of Congressman Rothman. Dr. Susan Graham, Associate Professor of Theology at St. Peter’s College, was also a guest of honor at the occasion. Dr. Graham has brought her theology students to the temple many times during the past few years to learn about Hinduism and the Swaminarayan religion and also comes to the annual Diwali and annkoot celebrations. Dr. Graham has also had our religious scriptures Shree Swaminarayan Gadi and the Shikshapatri placed in the St. Peter’s College library. All of these wonderful guests were presented with flower garlands, prasad saals, and momentos.

Acharya Swamishree then showered His divine blessings upon the entire congregation for the first time during His 2012 North American Vicharan.

In His divine blessings, Acharya Swamishree emphasized the importance of bhakti (devotion). Bhakti is the means by which we, disciples, show our love to the Lord, but it must be done with a pure heart with the sole intention of pleasing the Lord. We must not perform bhakti to impress anyone else other than the Lord or out of envy or jealousy, nor should we get envious or jealous if someone else performs bhakti. Acharya Swamishree used kirtan bhakti (devotional singing) as an example. Many people can sing kirtans, but it is only when the disciple sings out from his or her heart that it is called true kirtan bhakti. It does not matter if you are old or young, male or female, it is the soul that yearns to please the Lord, so anyone may sing a kirtan. Kirtan bhakti was very dear to Jeevanpran Shree Muktajeevan Swamibapa. Kirtans are praises of the Lord sung in sweet, melodious tunes. Disciples, even very young children, can learn quickly about the Lord’s greatness through singing kirtans, and singing kirtans is enjoyable for both the disciple and the Lord. Acharya Swamishree explained that all types of devotion - kirtan bhakti, bhakti nrutya, scripture recitals, dhyaan (meditation upon the Lord’s murti), etc. - are all pathways to the Lord and the ultimate knowledge about His grandeur.

Acharya Swamishree also spoke about the Lord’s protection (raksha) for His children. When one of the Lord’s disciples is in need, and he or she calls out for the Lord by any of His names for help, the Lord will immediately come to the rescue of His child and will take care of him or her. A true disciple will understand when the Lord has protected him or her. The Lord is forever present to protect His children and is always watching over them, but it is up to His children to realize this.

Once Acharya Swamishree concluded His divine blessings, He inaugurated the Sarvopari Shree Swaminarayan Bhagwan Serial in the United States. All disciples were able to purchase the DVDs, and everyone was then served maha prasad in the Swamibapa Hall lobby. 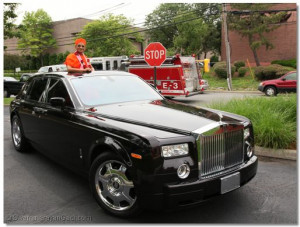 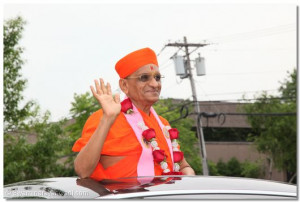 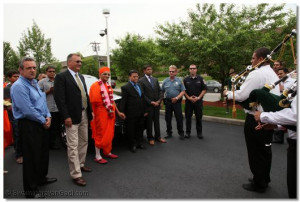 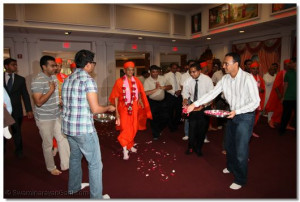 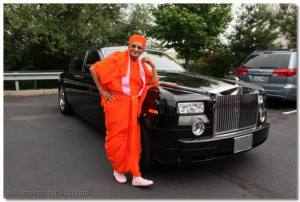 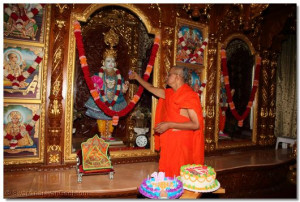