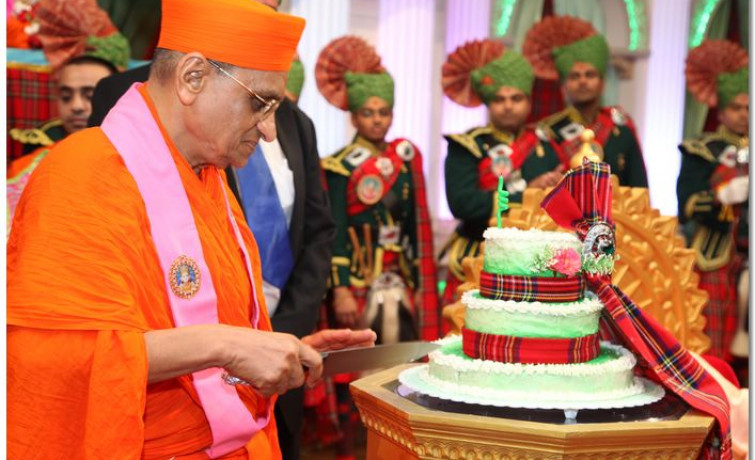 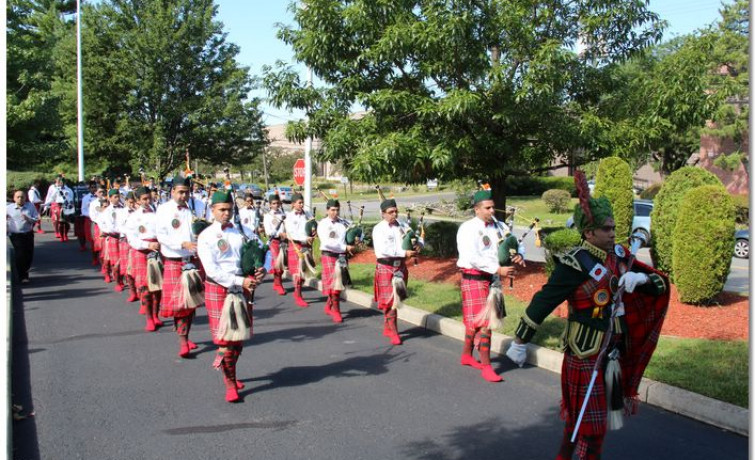 As a part of Acharya Swamishree's three-week 2013 vicharan in the United States, a three-day festival was held at Shree Swaminarayan Temple New Jersey to celebrate two very special occasions - the temple's 12th patotsav and Swamibapa Pipe Band's 10th anniversary. From Friday, August 2, 2013, through Sunday, August 4, 2013, disciples from all across the United States came together for the celebrations in the presence of His Divine Holiness Acharya Swamishree and sants.

Celebrations commenced on Friday evening. After sandhya aarti niyams and mahaprasad, all disciples gathered in Swamibapa Hall for samuh raas. To start off the evening, current and former members of Swamibapa Pipe Band performed a glow-in-the-dark raas dance to the kirtan “Vhala Swamibapano Prem Malyo.” During the performance, Acharya Swamishree was seated on a raised intricately-decorated throne, and the disciples circled around Him as they danced. Acharya Swamishree's throne also rotated, and He bestowed His divine darshan to all of the disciples dancing as well as those seated around Him in Swamibapa Hall.

After the performance, the raas music immediately started up, and members of Swamibapa Pipe Band as well as Swamibapa's talented sants sang kirtans and played musical instruments throughout the night. Acharya Swamishree and Shree Harikrushna Maharaj swayed along with the music and lovingly smiled upon Their sants and disciples as they danced all evening. The evening ended with a “sanedo” or “valido,” and all sants and disciples gathered around Acharya Swamishree to dance and celebrate.

After sandhya aarti and dinner, everyone gathered back inside Swamibapa Hall, and Swamibapa Pipe Band entertained the crowd throughout the evening with a wonderful program to celebrate its 10th anniversary. The band first performed “Jay Jay Swamibapa,” “God Bless America,” and “Jana Gana Mana,” to salute Jeevanpran Shree Muktajeevan Swamibapa, the United States, and India, respectively.

The crowd then watched a short documentary about Swamibapa Pipe Band created by director Richard Law as well as a feature slideshow and video created by pipe band members that walked through the band's progress from conception to current status. In the feature presentation, various members of the pipe band talked about their most memorable experiences within the band, what they love most about being in the band, and what the band means to them. Acharya Swamishree, sants, and disciples all were truly pleased to see how much the young members of the band have grown, learned, and progressed over the past ten years. It was wonderful to see how being in this band has allowed these young men to please Lord Swaminarayanbapa Swamibapa and Acharya Swamishree while expressing their love for Them through melodious devotion.

Acharya Swamishree was then escorted to the stage and seated upon His gadi. He presented Kanubhai P. Patel - band manager, Barry C. Freeman - band instructor, and all former and current members of Swamibapa Pipe Band with plaques of appreciation. Barry C. Freeman, the band's instructor, who has been voluntarily providing his services to the band for the past ten years, then expressed his sentiments about what the band means to him to the audience. He was extremely pleased to see how much the young boys from 2003 have grown into young men and have developed their musical talent to please the Lord over the past ten years. Pipe Major Tushar M. Patel also recounted his experience of being in the band since its conception and how it has allowed him and his fellow members to significantly develop their love for the Lord.

Acharya Swamishree then cut a special cake for the band's 10th anniversary, and the pipe band performed its finale. The finale commenced with a kirtan called “We All Love You Bapa” specially written for the occasion by Sadguru Shastri Shree Sarveshwardasji Swami to the tune of “We Will Rock You.” Instructor Barry C. Freeman sang this kirtan to please Acharya Swamishree and the Lord as the band played along. Disciples in the audience all waved individual signs as well as a big sign saying “We All Love You Bapa” throughout the performance. The band then performed “Jay Jay Shreejibapa,” “Swamibapa Pranthi Pyaara,” and the newly viral kirtan “Shreeji Thank You, Bapa Thank You” to end the night with a bang. Sants and disciples all waved signs saying “Shreeji Thank You” and “Bapa Thank You” to express their love for Them. This concluded the evening's celebrations.

Sunday morning was the day of the patotsav. From 7 AM to 9 AM, Acharya Swamishree performed the 12th patotsav ceremony  to the divine murtis (idols) of Lord Shree Swaminarayan, Jeevanpran Shree Abji Bapashree, and Jeevanpran Shree Muktajeevan Swamibapa, who were all adorned in Swamibapa Pipe Band-themed vagha. During the ceremony, Acharya Swamishree performed the Patotsav poojan and raised new flags above the temple domes. Acharya Swamishree and Secaucus Mayor Michael Gonnelli raised the flags together with the assistance from the Secaucus Fire Department. Acharya Swamishree also performed the opening ceremony for the annual blood drive that took place that day. Seventy-one disciples and community members signed up to donate blood, and fifty-one pints of blood were collected. The young disciple who organized the whole blood drive received a scholarship from the blood services group for his efforts.

Acharya Swamishree subsequently showered His divine blessings upon the entire congregation. Acharya Swamishree expressed how pleased Lord Shree Swaminarayan, Jeevanpran Shree Abji Bapashree, and Jeevanpran Shree Muktajeevan Swamibapa are pleased with all of the members and volunteers of Swamibapa Pipe Band for rendering their selfless devotional services to the Lord and expressing their love to the Lord through music for the past ten years.

Acharya Swamishree and disciples then launched a new Vachanamrut website that is in progress. After the website launch, Acharya Swamishree gave His darshan to all disciples and was escorted out of Swamibapa Hall to consecrate the day's lunch, and this concluded a memorable three-day 12th patotsav and Swamibapa Pipe Band 10th anniversary celebration.

As such, Acharya Swamishree's blessed and memorable three-week vicharan concluded, and He departed to London the next evening. A mandal of seven sants will continue to tour the vast United States until mid-September to fulfill the humble desires of disciples living across the nation. 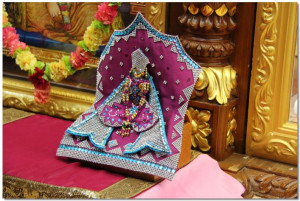 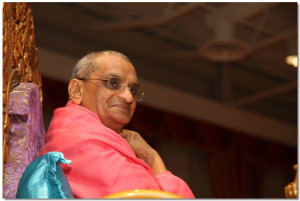 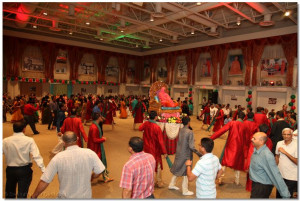 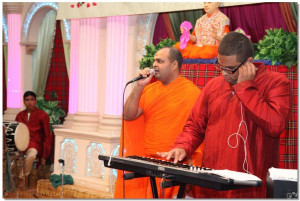 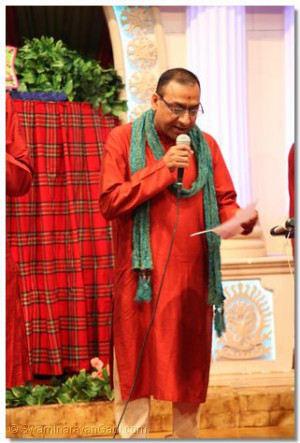 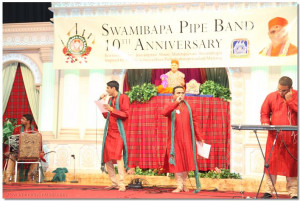