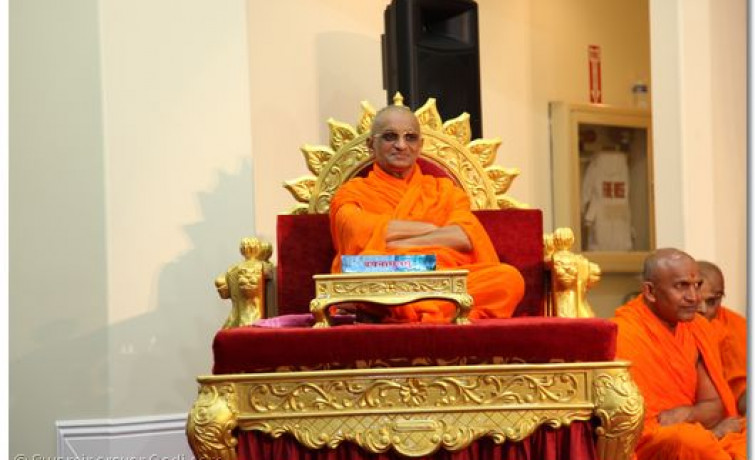 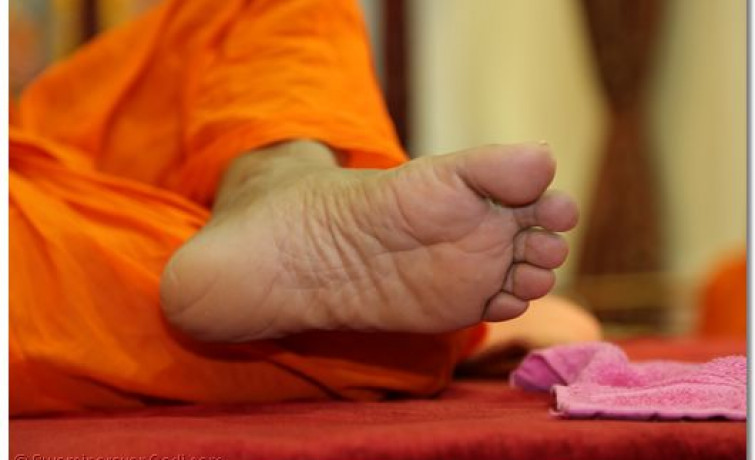 The third day of the Murti Pratishtha Mahotsav commenced with the continuation of the auspicious yagna ceremony. After His Divine Holiness Acharya Swamishree concluded the ceremony for the day, parayan sponsors performed pooja in the temple and were given the opportunity to make offerings to the yagna fire. They all performed aarti to Lord Swaminarayanbapa Swamibapa to conclude the pooja.

Acharya Swamishree was then escorted from the temple’s side parking lot to the main entrance by Swamibapa Pipe Band. Upon arriving inside the temple, Acharya Swamishree was seated upon His gadi, and He commenced His divine blessings for the day.
In His ashirwad, Acharya Swamishree stated the importance of keeping constant love and affection towards the Lord. It is this love that aids us in performing all the means, devotion, and seva to please Him. Through ones association with the Lord’s Satpurush, a firm love for the Lord develops. Shreejimaharaj has stated that if someone becomes associated with worldly issues, then he is not able to have a firm affection for the Lord. If love for the Lord is combined with an understanding of the Lord’s glory, then one will never see bad virtues in others, will only concentrate on bad virtues within oneself, and will take good virtues from others to strengthen one’s soul. In addition, with a combination of love and the understanding of the Lord’s glory, one will never think to be associated with worldly issues and will only ever want to be associated with the Lord, His Satpurush, and the Karan Satsang.

Acharya Swamishree then spoke about our internal enemies. Our internal enemies such as lust, anger, greed, etc. harass us day and night and try to take us away from the murti of the Lord. It is the duty of the Lord’s Satpurush to guide disciples along the path of the Lord and to give them the Lord’s divine murti. The bliss in the Satsang is where assemblies are held and religious scriptures are read. When a mumukshu comes to the Satsang, the Satpurush hugs him or her and accepts all the seva they offer. In the Karan Satsang, only the Lord’s grace remains. All we must do is realize the Lord and Karan Satsang to be supreme, and all other means are simply to please the Lord. If one is able to recognize his or her own mistakes and accept the Lord as being almighty, then the Lord’s grace enters one’s soul.

After imparting these valuable words, Acharya Swamishree paused His ashirwad, and Swamibapa Pipe Band escorted the day’s honorary guests into the temple prayer hall. The guests of honor included a former United States congressman from California, representatives for the Mayor of Van Nuys, representatives from the Bernadi Senior Citizen Center that neighbors the temple, and a local chiropractor. The former congressman presented Acharya Swamishree with a United States flag that once flew over the Capitol Building in Washington, D.C. and also with an honorary certificate. The local chiropractor presented Acharya Swamishree with a $10,000 donation to Shree Swaminarayan Temple Los Angeles. Disciples then presented the representatives from the Bernadi Senior Citizen Center with a donation check. All of the special guests were honored with prasad paags, saals, and garlands. Many of the guests gave heartfelt speeches to Acharya Swamishree and the congregation, sharing congratulations and giving their support to the temple.

The guests were then escorted out of the temple, and Acharya Swamishree resumed His divine blessings. He explained that Lord Shree Swaminarayan has made our homes and temples equivalent to Akshardham, so we should be extremely careful to keep peace in our homes and not create quarrels. Quarrels cause a disturbance in peace, and wherever there is a disturbance in peace, it is not possible to perform any means to please the Lord such as doing pooja, offering thaal, performing aarti, etc. The Lord is merciful, and He ignores the sins of those who take His shelter. One of the reasons of the Lord’s manifestation was to free all sinners of their sins and show them the path of devotion, knowledge, and asceticism, and to grant eternal salvation. We must try to keep peace in our homes and temples so that we may please the Lord to the fullest.

Acharya Swamishree concluded His divine blessings for the morning, and the Swaminarayan Gadi Jay was recited. Parayan sponsors then carried in chhaabs of offerings for Lord Swaminarayanbapa Swamibapa. They were all blessed by Acharya Swamishree, and many of them were also given prasad paags.

Afterwards, Acharya Swamishree unveiled the momentos for the Murti Pratishtha Mahotsav. The momentos feature the beautiful marble murti of Lord Shree Swaminarayan from Shree Muktajeevan Swamibapa Smruti Mandir with color-changing LED lights.
Following the inauguration of the momentos, parayan sponsors were given the opportunity to perform aarti to Lord Swaminarayanbapa Swamibapa. Acharya Swamishree was then escorted out of the temple prayer hall, and this concluded the morning sabha. Everyone was then served maha-prasad lunch in the tent behind the temple.

The procession then began. Lord Swaminarayanbapa Swamibapa, the Guruparampara, and Acharya Swamishree bestowed Their divine darshan to all the disciples and spectators throughout the entire procession, which was over a mile long and lasted for two hours. The nagaryatra started at the intersection of Hatteras Street and Van Nuys Boulevard and ended at the intersection of Hamlin Street and Van Nuys Boulevard, the location of the temple. Although there were scattered rain showers during the previous few days, the sun was out and shining brightly, and not a single rain drop could be seen during the entire procession by the grace of the Lord. Lord Swaminarayanbapa Swamibapa was undoubtedly present for the grand procession towards His new home in Los Angeles.

Swamibapa Pipe Band led the nagaryatra, young disciples from California and New Jersey performed devotional dances to kirtans behind the chariots, and hundreds of disciples from all over the world walked in the procession singing praises of the Lord. Hundreds of local residents and workers came out from their homes, offices, and stores to gaze at the procession, the divine murtis of Lord Swaminarayanbapa Swamibapa, and Acharya Swamishree.  They snapped photos on their cameras and phones and recorded videos with their camcorders. Lord Swaminarayanbapa Swamibapa and Acharya Swamishree bestowed their divine darshan upon them all.

After maha-prasad, around 8:00 PM, everyone gathered in the temple for Bhakti Sandhya performances by the extremely talented sants of Maninagar Shree Swaminarayan Gadi Sansthan. The sants began the evening with a prathna to Lord Swaminarayanbapa Swamibapa and recited the Swaminarayan mahamantra.

Before commencing the kirtan-bhakti performances, a talented young disciple from California played “Happy Birthday” and “Saare Jahan Se Acha” on the flute to please the Lord and Acharya Swamishree.

The sants then sang many wonderful kirtans to the accompaniment of music played live by sants as well, and disciples became so filled with joy that several times during the evening’s performances, they got up to dance in their spots. Everyone also enjoyed Sant Shiromani Shree Gurupriyadasji Swami’s emceeing throughout the evening, as he narrated many divine episodes of the Lord and explained His greatness between performances.

After the sants sang nine different melodious kirtans, they delighted disciples one more time by singing sanedo. All disciples, young and old, were on their feet dancing along to the praises of Lord Swaminarayanbapa Swamibapa. Once the sanedo was finished, Acharya Swamishree was escorted out of the temple prayer hall by disciples, and this concluded the third day of celebrations. 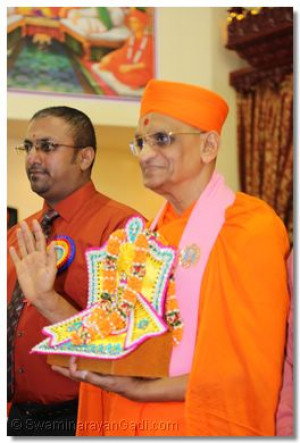 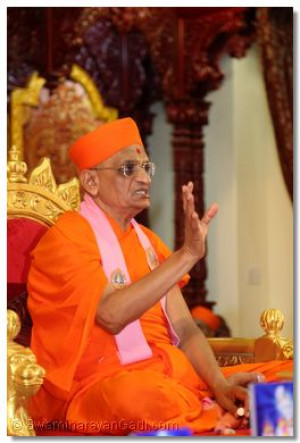 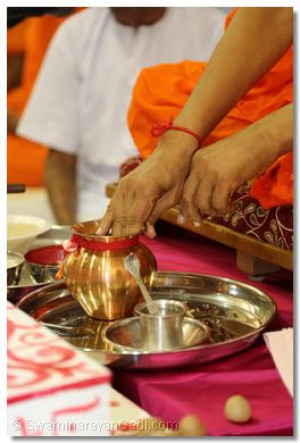 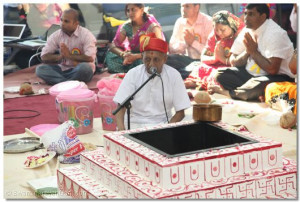 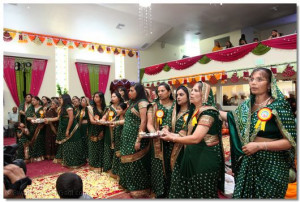 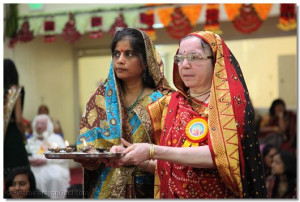