Maninagar Shree Swaminarayan Gadi Sansthan (MSSGS) held its inaugural North America Convention from July 1st through July 5th, 2015, right outside the windy city of Chicago, Illinois, at the JSMC Community Center. After a full year of planning and coordination by over 200 dedicated volunteers, with Lord Shree Swaminarayanbapa Swamibapa and His Divine Holiness Acharya Swamishree Maharaj’s blessings, over 1200 pre-registered participants attended, with an additional 500 walk-in registrants. Despite being scheduled on a very important long holiday weekend, the exceptional turnout spoke volumes about the importance and significance of the event.

The convention was inspired and graced by His Divine Holiness Acharya Swamishree Purushottampriyadasji Maharaj, along with a mandal of 21 eminent sants. The convention theme was based around unity, although breakout sessions covered many religious topics, which were presented in presentation-style lecture-based sessions. Also featured were many socially-relevant topics, such as health, financial management, and career/education workshops. There were also special sessions focusing on distinctive topics for females, males, and youth. The main content of the entire convention was based on making the foundations of our religion relatable in the modern world. The convention comprised of a series of activities and workshops to teach participants not only the about the glory of Maninagar Shree Swaminarayan Gadi Sansthan, but to also to develop within participants key life-skills, such as collaboration, empathy, trust, self-efficiency, teamwork balanced with independence, problem-solving, communication, and leadership. A blood donation camp was also held throughout the convention to promote our annual campaign to donate the precious gift of life.

The five-day convention started off with registration and the Opening ceremony at Shree Swaminarayan Gadi Temple in Streamwood, Illinois. Acharya Swamishree officially opened the registration tent and received His nametag for the convention. Acharya Swamishree also distributed nametags and convention welcome bags to sants and disciples. Every attendee received complimentary admission (what does that mean? – no entry fee) and a welcome bag, including a drawstring backpack, nametag with custom lanyard and schedule, water bottle, hand sanitizer, mala counter, notepad and pen, hand bracelet, and t-shirt. Poojas and Jeevan Pushpa books were also made available for registrants. Welcome refreshments were also available for attendees during registration, and dinner prasad was provided as well.

Proclamation Text
By Shree Swaminarayan Siddhant Sajivan Mandal North America
Know Ye, that Shree Swaminarayan Siddhant Sajivan Mandal North America takes great pleasure in honoring
H.D.H. Swami Purushottampriyadasji Maharaj, the humble servant of Lord Shree Swaminarayan, Jivanpran Shree Abjibapa and Jivanpran Shree Muktajeevan Swamibapa, for His tireless efforts in cultivating our Satsang over the past 36 years at great cost to His human form, for His forgiveness of our faults, for His unconditional love, for His divine inspiration to help us achieve that which is the best within us, for serving humanity through good times and bad with the same consistency, for His complete focus on achieving moksha for every living being that has come within His presence, and for carrying the mantle of Lord Shree Swaminarayan and our Guru-Parampara with the utmost integrity. No words can truly capture the greatness, meaning and value of our Sadguru. We can only hope to live our lives such that we honor Him with every second of every day of our existence. On this occasion, we pray to Lord Shree Swaminarayan that He grace us with the love and teachings of our Sadguru for many years to come.
In Testimony Whereof, We have hereunto subscribed our hands and seals on this 1st day of July, 2015, in Streamwood, Illinois. 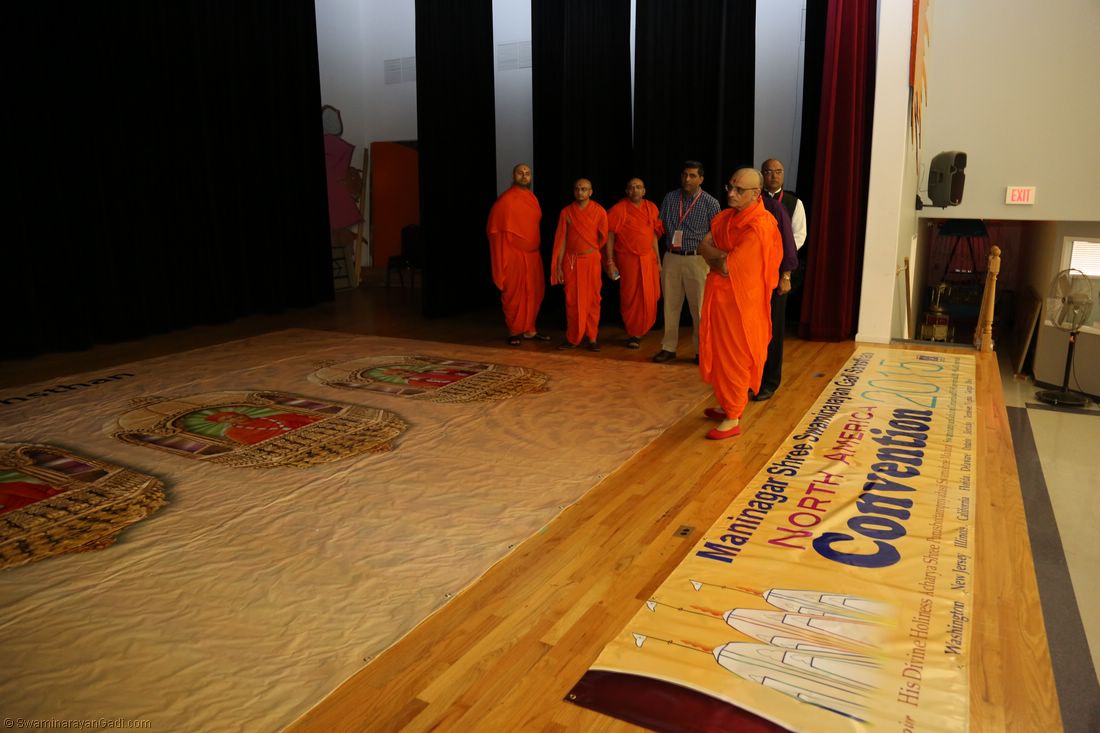 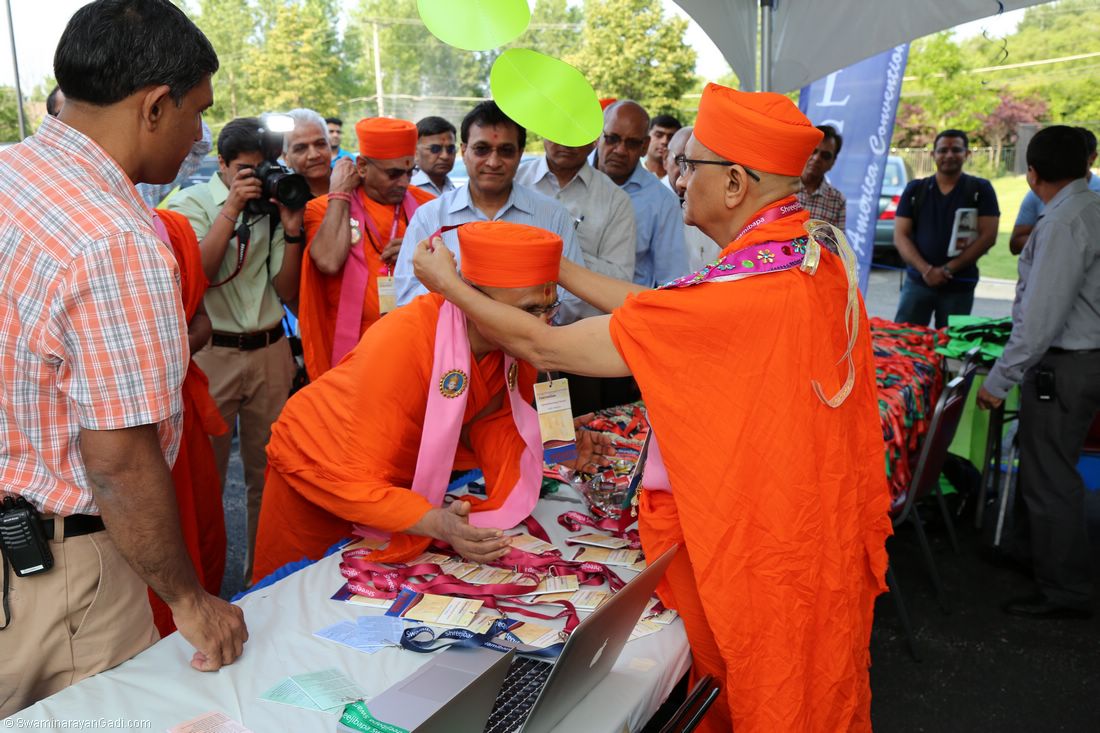 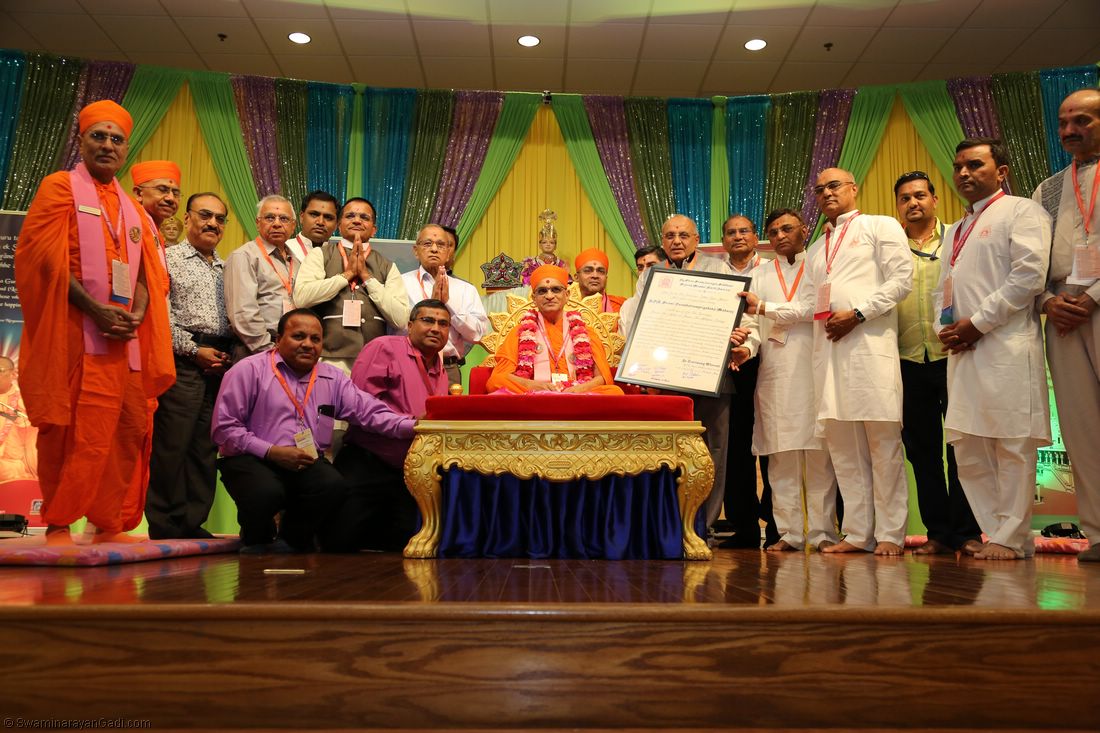 The Convention’s first day kicked off with a deep-pragatya ceremony performed by Acharya Swamishree Maharaj and then a session focusing on daily prayers, or pooja. The workshop took place in Acharya Swamishree Maharaj’s presence, with over 250 youth disciples of all ages being walked through how to do correctly perform their daily prayers. Following this session, attendees went to various breakout sessions focusing on topics such as Niyam (Rules), Ekta and Paksh (Unity and Loyalty), and Bhakti (Devotion).

Following the morning sessions, the afternoon featured sports tournaments for cricket and volleyball, as well as team-building activities for the youth. Yoga sessions were also available for adults. The eminent sant mandal also held a unique Q&A panel for adults seeking clarification and further explanation about the religion.  The evening program featured devotional dances, singing, and skits from disciples all across North America displaying their devotion towards Lord Swaminarayanbapa Swamibapa, Acharya Swamishree Maharaj, and Shree Swaminarayan Gadi. 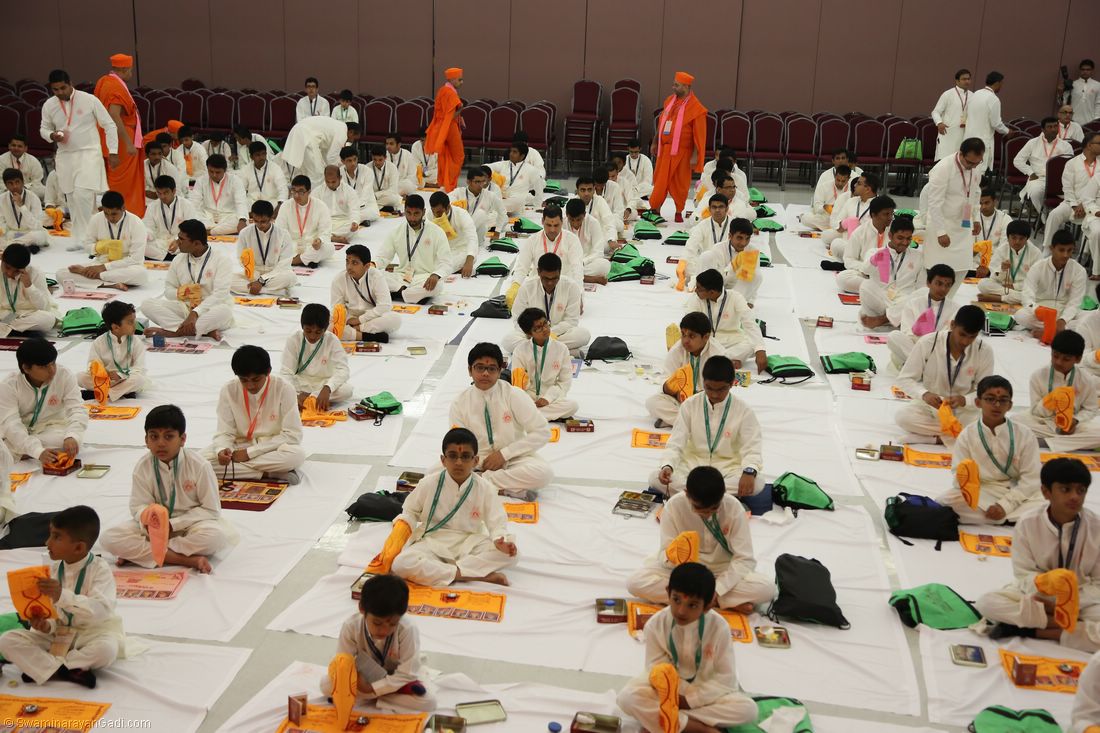 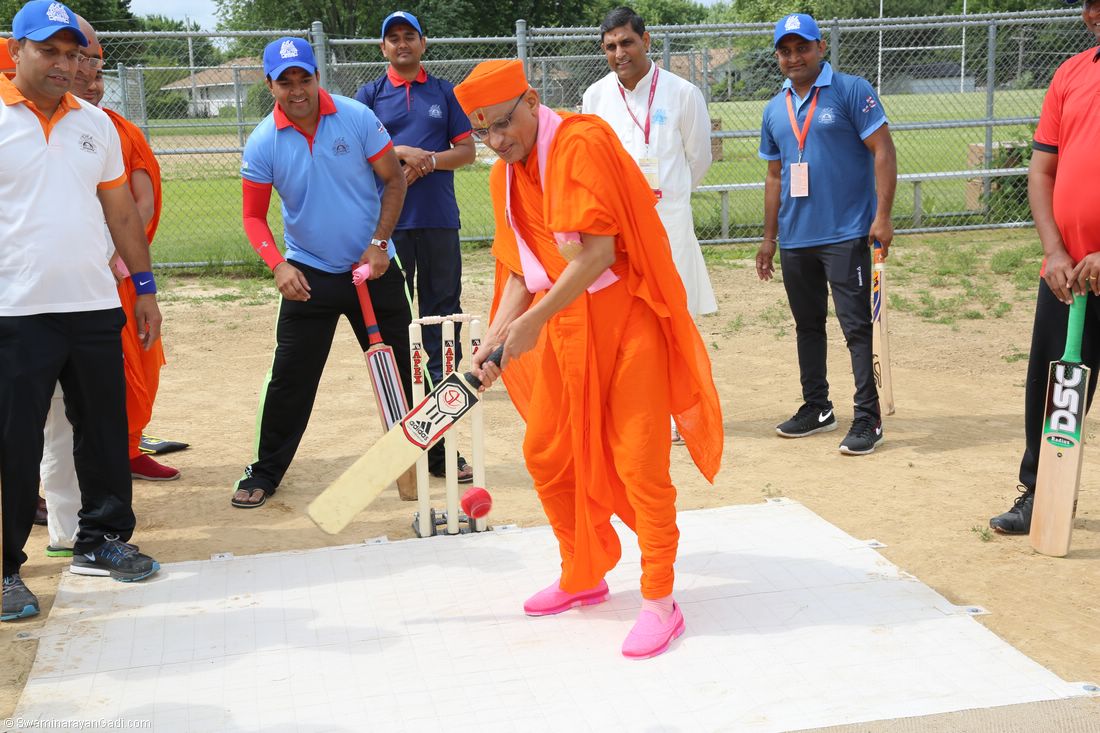 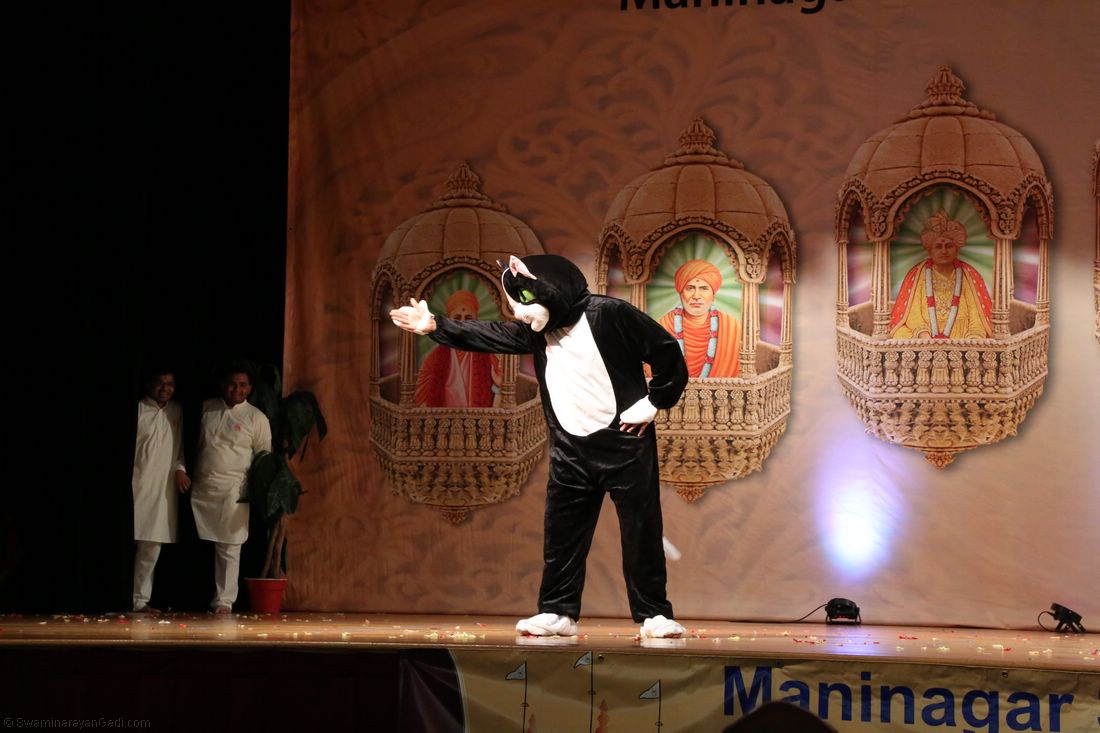 A night filled with devotional dances, singing and skits from disciples from all over North America.

The second day of the convention featured sessions on Gnan (Knowledge), Dharma (Religion), and Career/Education. For the career/education workshop, the youth learned how to balance their school life with their social life; for adults, a guest speaker from New York Life, Mr. Yogesh O. Khatri, spoke about financial management, asset protection, and investment advice. The afternoon session featured H.D.H. Acharya Swamishree Maharaj Himself leading interactive sessions with male youth attendees focusing on the pillars of the Swaminarayan Gadi religion, and He took the time to learn about the each disciple’s personal life and career goals. All youth of the religion were shown the direct accessibility that Swaminarayan Gadi followers have with our Acharya and Guru, which is unparalleled. The women of all ages held a special Ladies’ Cultural Program in the afternoon, featuring dances, skits, musical performances, and singing by numerous female disciples across the United States.

The evening program for day 2 of the convention comprised of a concert featuring YouTube Sensation and India Raw Star Finalist, Jeffrey Iqbal. Iqbal, who performed exactly one year ago at the grand opening ceremony of our temple in Bear, Delaware, opened the evening by saying, “My career really took off after performing in Delaware and receiving Bapa’s [Acharya Swamishree’s] blessings.” He was accompanied on stage by renowned percussionist Jomy George, as well as distinguished clarinetist and composer Shankar Tucker. The team of professional musicians prepared a special selection of religious kirtans (hymns) to display bhakti (devotion) to Lord Shree Swaminarayanbapa Swamibapa and Acharya Swamishree Maharaj. 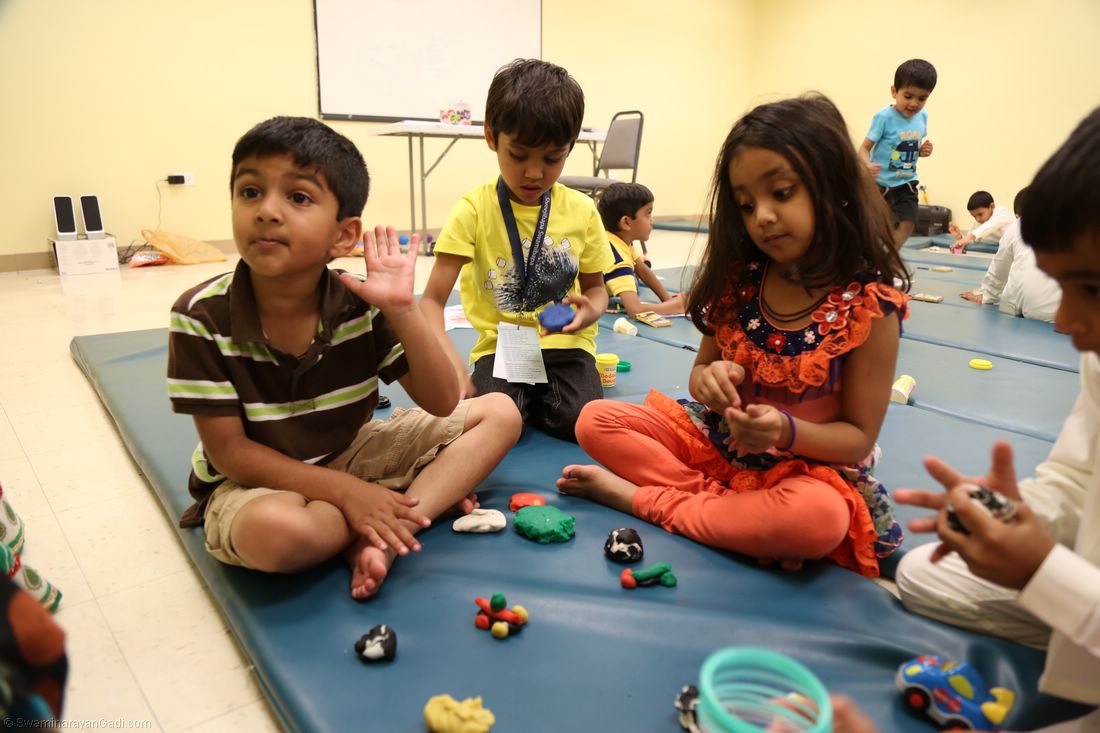 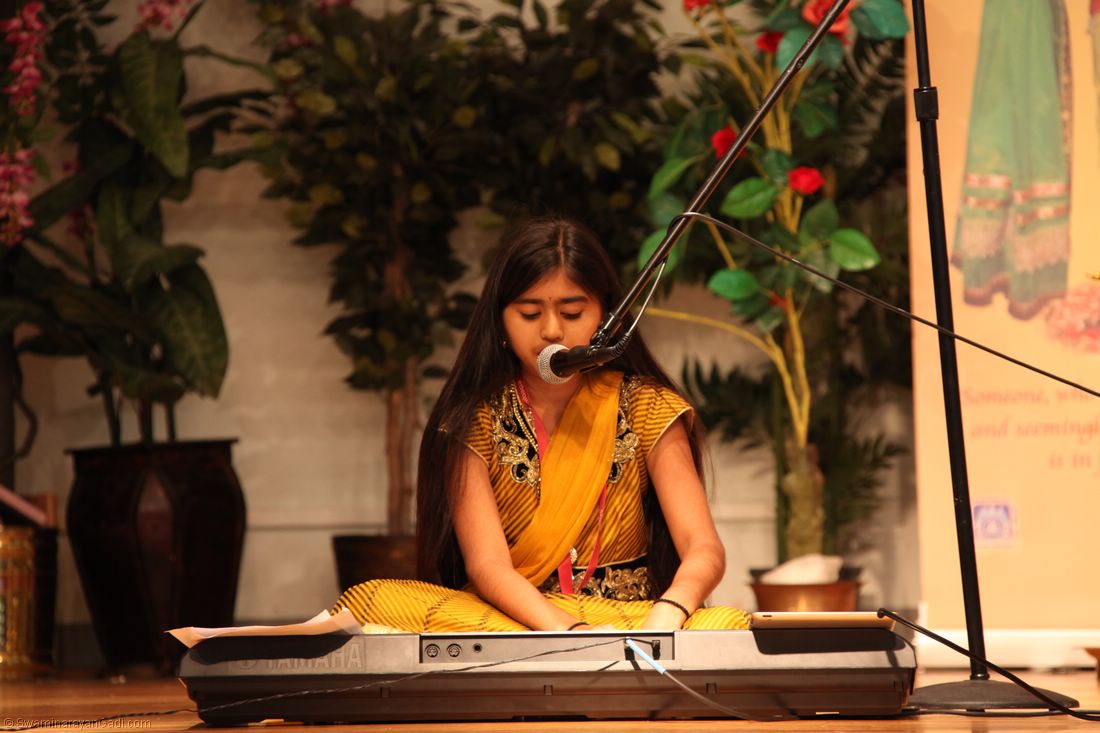 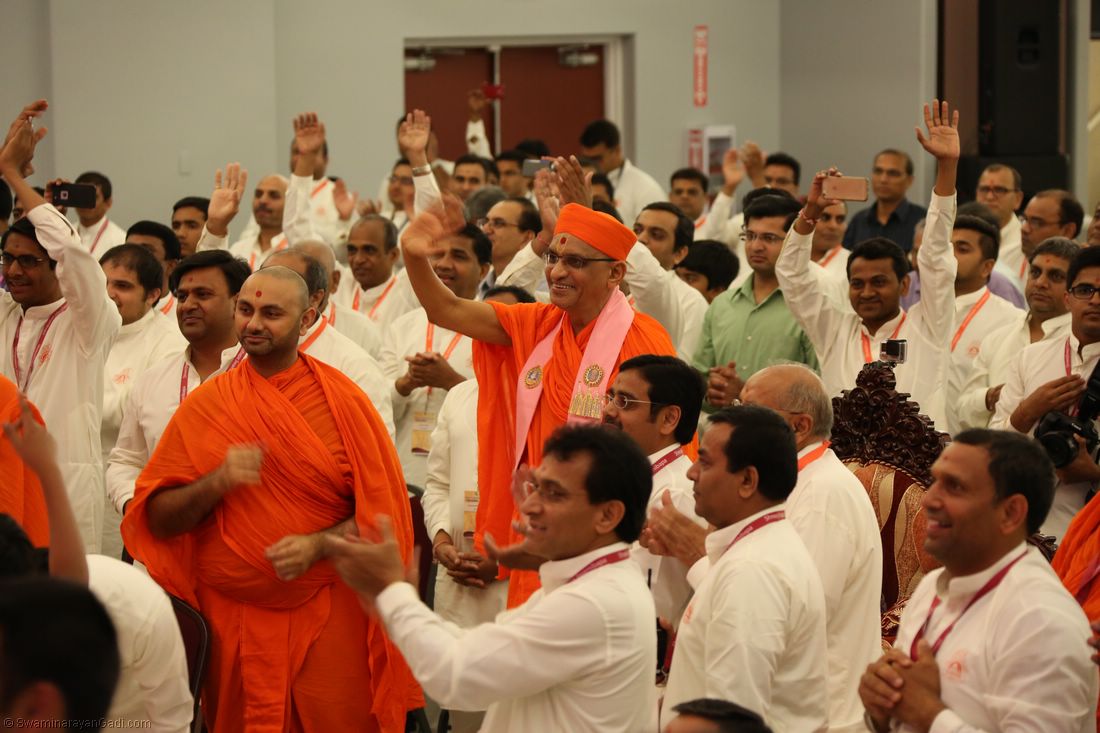 The final day of the convention focused on topics that affect an individual’s day-to-day living and demeanor. Sessions focused on the topics of Vaani, Vartan, and Vichaar (Speech, Actions, and Thoughts), Swabhav Prakruti (Self-Expression & Character), Seva (Service to Others), and Health, which featured a special presentation from anesthesiologist and Temple University professor, Dr. Dilipbhai K. Patel. The supreme tenets of Maninagar Shree Swaminarayan Gadi Sansthan are based on service to society and the community. Acharya Swamishree Maharaj Himself personifies the mantra of “service above self.” Disciples were taught about the importance of community service through organization and participation in blood drives, medical camps, various charity initiatives, and even participation with the Swamibapa Pipe Band. Furthermore, women’s programs included several interactive workshops for vagha (divine garments), rangoli (sang, dry fruit, and rice art), decorations, cooking, and many other types of seva (service), that may be performed in the temple.

The event’s closing ceremony featured blessings from Acharya Swamishree Maharaj. He summarized all the topics that were covered in the convention and explained the importance of events like this and their impact on not only the religion, but also their impact on society and personal growth. Acharya Swamishree Maharaj explained key points and life lessons, while speaking in both English and Gujarati. Acharya Swamishree stated, “By behaving with humility, you earn the right to salvation. If you regard everyone to be innocent, joy and peace will pervade within your soul. An angelic soul is tolerant; a jealous and quarrelsome person is not even considered a human being. Freeing yourself from addictions is the best medicine that you can administer to yourself. Freeing others from addictions is your truest service to humanity. Just like a light needs a current to give off light, we have been provided a current in the form of love and compassion by our Lord Shree Swaminarayan and Gurudev Jeevanpran Shree Muktajeevan Swamibapa.” The importance of how a single individual can impact the community was one of the many things that every convention participant walked away with. The convention concluded with recognition for the convention volunteers and the winners of the sports tournaments.

With over 1500 participants throughout the week at the inaugural convention, the Maninagar Shree Swaminarayan Gadi Sansthan was able to enhance the knowledge of all the attendees and motivate them to continue serving and giving back to their local communities. Above all, we all came closer together as one united Maninagar Shree Swaminarayan Gadi Sansthan Parivar, and we paid tribute to Gurudev Jeevanpran Shree Muktajeevan Swamibapa and Acharya Swamishree Maharaj for their tireless efforts to spread the sublime philosophy of Lord Shree Swaminarayanbapa Swamibapa throughout North America and the world. This was an event that attendees will remember for the rest of their lives, and they have all walked away with an eagerness to progress within the Faith and please Lord Shree Swaminarayanbapa Swamibapa and Acharya Swamishree Maharaj with selfless devotion and service. We all cannot wait for the next time our vast Parivar will come together as one again! 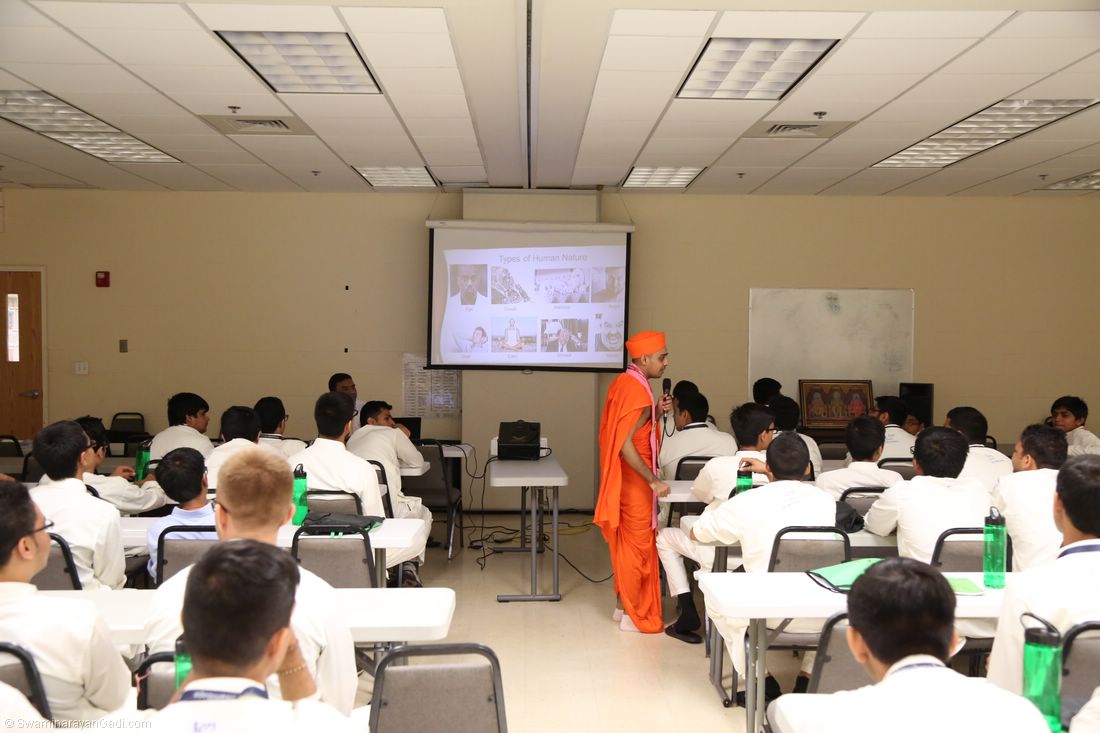 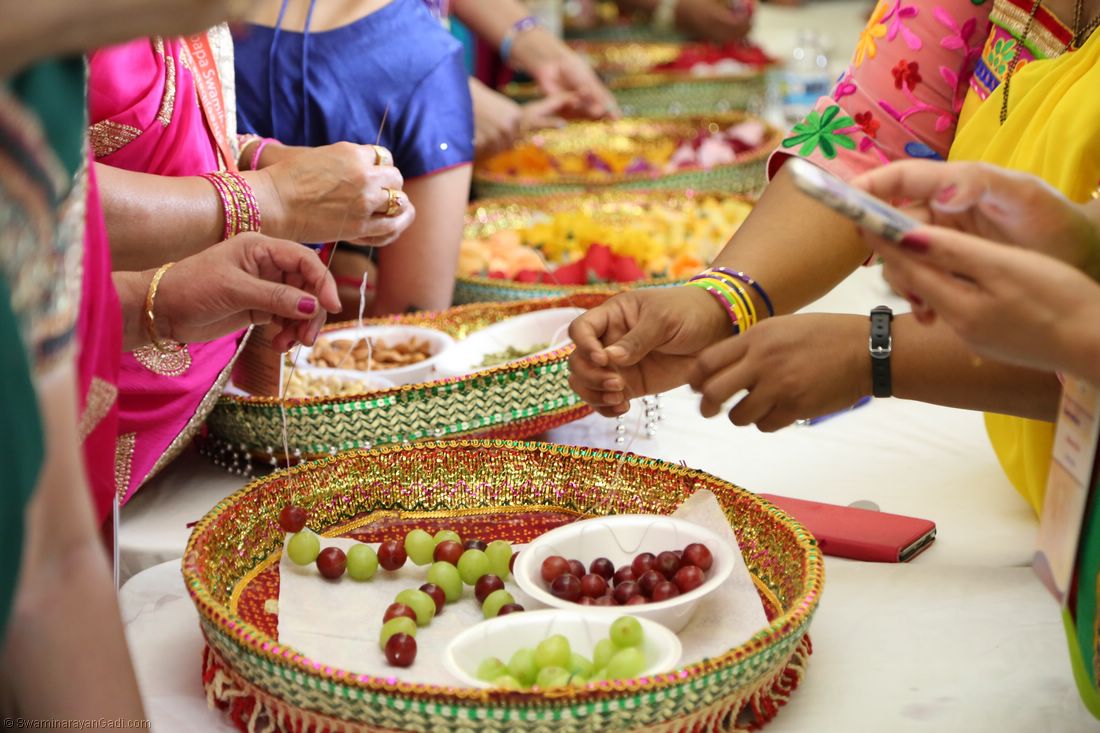 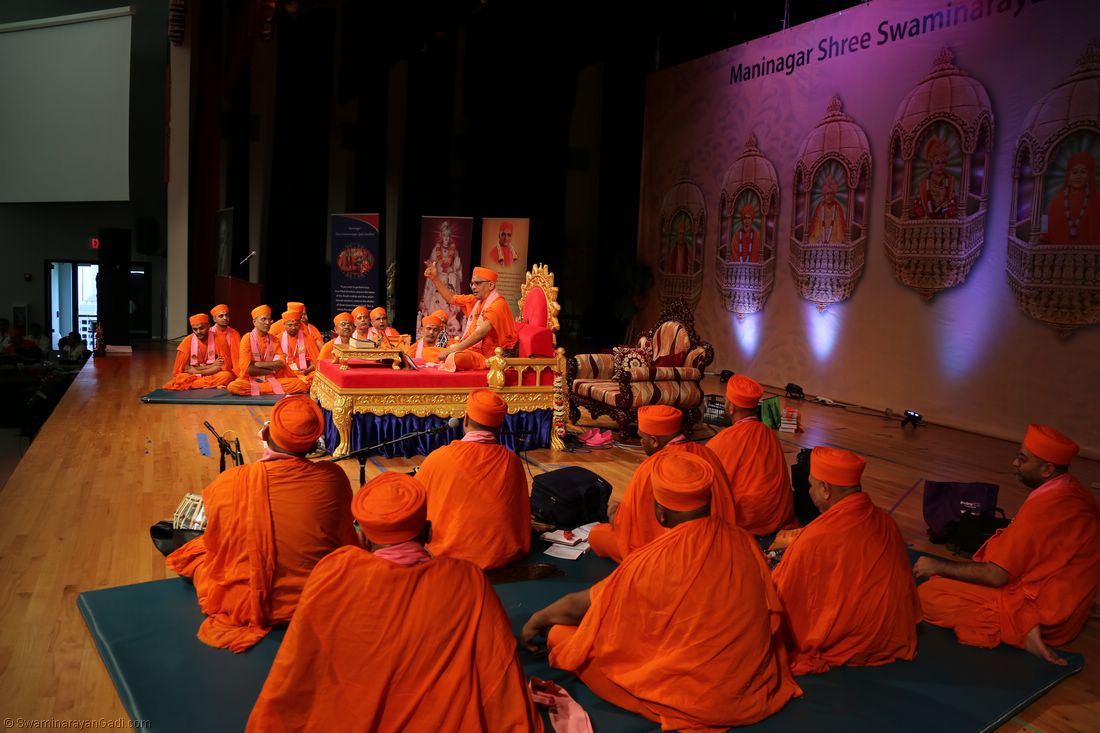