Gnan Mahodadhi Acharya Shree Jitendriyapriyadasji Swamiji Maharaj asked all the disciples present to pay keen attention as He explained the divine history of Vachanamrut Gadhada middle section 62 where in that in Samvat 1881, Magshar Sud 2 (Monday 22 November 1824) Lord Shree Swaminaryan along with a congregation of sants and disciples were presiding at Dharampur, Surat at Kusharkuvarbhai’s court and on this same day and time He was presiding in His divine form with the same congregation of sants and disciples at the court of Dada Khachar in Gadhada where He spoke of His own volition. The Lord says that three types of propensities exist for the salvation of a soul, which lead to immense bliss. Of these propensities, the first is a resolute conviction about the soul (aatma-nishtha). This involves believing oneself to be a soul and worshiping the Lord in the same manner that Shukji did. The second is the propensity like that of a chaste (pativrata) woman. The Lord should be worshipped in the same manner that the Gopis did. The third propensity is that of servitude. One should worship the Lord as His servant, just like Hanumanji and Udhhavji did.

The Lord explained the characteristics of a person who has a conviction about the soul (aatma-nishtha). How can one attain a resolute conviction about the soul? On one side is the soul, and on the other side is the constellation of Maya, i.e., the body, indriyas, antah-karans, the three attributes, five sensations, etc. The thought that remains between these two is spiritual knowledge.  The knowledge and thought that the soul is true and full of bliss, and the soul is separate from the body. This spiritual thought remains steady, just as the tip of a flame remains totally still in a place where there is absolutely no wind. That thought does not allow the body, indriyas and antah-karans to integrate with the soul. That thought does not become amalgamated with the soul either. When it attains a soul, its inclination becomes shortened. If it was as long as the distance to Kashi, it becomes shorter, like the distance to Vadtal. When that thought becomes affirmed, it becomes shortened from being like the distance to Vadtal, to being like the distance to this Gadhada. When the inclination that is as long as the distance to Gadhada becomes consolidated, it remains in the region of one’s own body. From the body, the inclination becomes shorter and remains only in the source of the indriyas. Then, from the source of the indriyas, the inclinations of the indriyas turn towards the antah-karans. The inclinations of the indriyas and antah-karans then become merged with the soul. This is referred to as the destruction of the soul’s passion-filled [karan] body. When that thought unites with the soul, enlightenment occurs within that person’s heart and he is able to visualise his soul to be Brahm-roop. Within that, he also visualises the Lustrous Murti of the Lord. Someone who visualises this realises, ‘I am a soul and the Lord eternally resides within Me.’ The existence of such a perpetual state is the highest level of having a conviction about the soul. 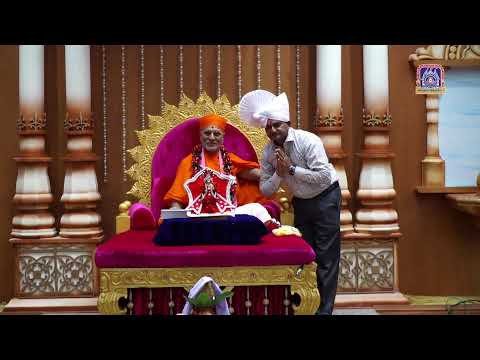