The Lord explains in the Vachanamrut regarding Infatuation, saying that it is the disorder that occurs within the mind. When infatuation increases within a person’s heart, the disorder in his mind also intensifies. The judgment between what is appropriate and inappropriate does not then remain.

The Lord comes out from trance due to His compassion upon His disciples when they come and pray to Him with persistence. However, what would be the reason for others coming out of the trance and detaching their inclination from the Lord’s Murti? This is because of a fascination with some sensation. The cause of infatuation is also the five sensations. These sensations are of three types: highest, moderate and lowest. When someone has experienced the highest type of sensation and then, someone else comes and hinders him, he becomes angry with that individual, be it being a sant, guru or the Lord. Infatuation arises from that anger.

Infatuation cannot be eliminated as long as the chitt is being lured by the five sensations that are alluring. If someone’s chitt has been enticed by a particular sensation that he especially likes, and a sant, guru or even the Lord, forbids that sensation, he becomes displeased with them and betrays them; but he does not obey their words. A person who contemplates about these sensations develops a desire to associate with them. This association leads him to indulgence, which then leads to anger. From anger, delusion occurs. Delusion leads to confusion of the mind, which leads to a loss of intelligence. Due to his lack of intelligence, that person is destroyed. Infatuation ceases through having: a conviction about the soul, asceticism, and an understanding of the Lord’s greatness.

A disciple is able to identify his mistakes and sins when the Lord showers His mercy upon him and he is able to act as per His will, if he has a divine resoluteness upon the Lord. One does not become the Lord’s by just mentioning as so, he has to perform deeds that are dear to the Lord.

Shree Muktajeevan Swamibapa says that in this world there are three types of eyes:

Once the eye of the heart opens, one is able to offer his services to the Lord through his mind, body, soul and wealth; and he attains darshan of the Lord’s divine Murti. 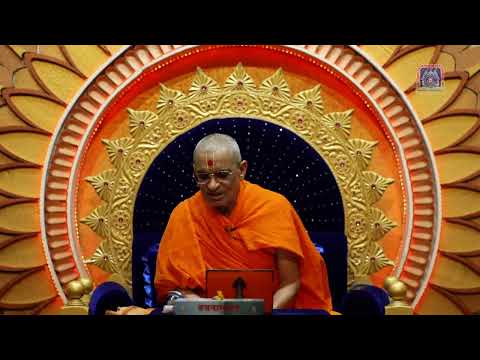