Lord Shree Swaminarayan’s only wish for His disciples is that they walk the path of truth as directed by Him and merge them into His divine Murti.

One who identifies with the Lord and has a firm affection for Him and His disciples in the same manner that he does with his own body, is able to experience the same peace as experienced by a person in nirvikalp trance state.

It is only one who follows the Lord's commands and acts as per His will, is able to have extraordinary Love for the Lord. The best and true religion is acting as per the Lord's will. One should not act as per his wish.

The Lord says that maintaining a steady inclination towards His Murti is extremely tough and it is the best way to attain His Murti.

The Lord supports, directs them and showers His mercy upon those who try to and never give up to have a steady inclination of their mind towards the Lord.

Through contention one cannot identify himself with the Lord and have a firm affection for Him. One is able to get closer to the Lord, identify himself with Him, and have a firm affection for Him through simplicity and unconditional trust in Him and His Muktas; and where there is this, there is no contention. By contemplating on the Lord's Murti whilst having trust and faith, one is able act without aggressiveness and act as per the Lord's will with simplicity and unconditionally.

Due to arrogance, ignorance and ego, one tends to offer their services to the Lord without understanding His greatness and due to this they get angered, jealous and proud. Therefore, one has to always offer services with an aim to please the Lord only. One should be grateful to be able to serve the Lord. One is said to have affection when the feeling of gratitude arises.  One who understands the greatness of Shree Swaminarayan Gadi shall be able to get rid of ignorance.

One who gets rid of ignorance is able to believe and act as per the Lord's commandments and is able to offer his services to the Lord with all his mind, body and wealth. Such service shall reach His Divine Lotus feet. The Lord accepts the smallest of services offered to him by His disciples who act as per His commandments and will. This behaviour is what gets one attached to Him. 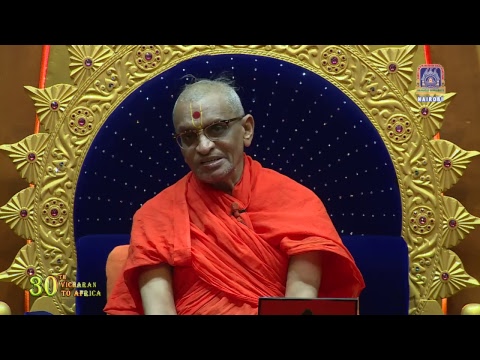