To be able to attain absolute bliss and peace in life one has to detach himself from the worldly passions and develop pure love and affection for Lord Shree Swaminarayan.

An intellect’s reward for his intellect is that he becomes world weary and estranged from the world, and develops affection for the Lord.

Shree Muktajeevaan Swamibapa has taught us that a life without prayers, obtestation and affection is not even like the prevernal season that comes before the spring. One who lives a life without love, affection, and maternal affection, cannot spring in his life. A prayer has so much power such that it can bring humility to a soul and sweetness to his speech. One who has no understanding of the Lord’s greatness cannot offer a prayer or obtestation to the Lord. To be able to offer a prayer and Love to the Lord, one has to first be prepared to render his all to the Lord. If this is not the case then whilst praying his thread of reverence gets cut. This life is like a wild ocean, just like the way the waves rise and retreat; we too will have ups and downs. To overcome this with ease one must reminisce the Lord at all times.

However much of literate, intellectual one is, he is still a child in front of the Lord and only a child can have flawless love, and is not deceitful. Therefore, for a disciple to be able to have affection and love for the Lord like a child, he has to surrender and seek refuge unto the Lord, and to be able to do this, one has to become free of all bad habits, execute the virtue of humility and get rid of pride and ego. By doing this, the Lord takes his disciples to reside in His divine Murti.

The Lord ensures that all souls who come to His shelter and will come to His shelter, and understand Him in such a manner, attain His Divine Abode, Akshardham, which is greater than all other abodes. He makes sure that these souls become like the omniscient, and make them capable of performing creation etc., of the cosmoses. Having attained this prowess, they should not start having egoistical thoughts such that they start believing they are eminent, and start disregarding the Pratyaksh Lord in the guise of a sage. They should realize that it is through the Mercy of the Lord that they have attained such greatness.

Hence, whilst in satsang, one should never become egoistical; they should always remain humble as they continuously pray to the Lord. The Lord always listens to the prayers of a humble soul. 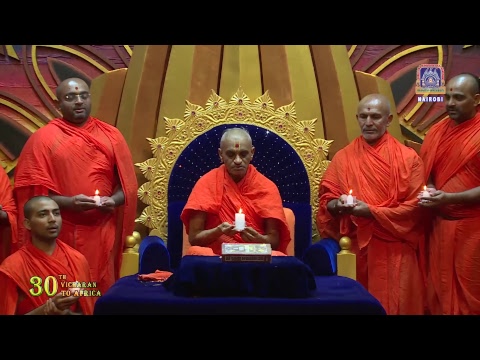