To attain a state of peace in their life, a disciple should never forget Lord Shree Swaminarayan’s blessings upon him.

The Lord has removed us from the three tremendous blazing infernos of mental, physical and emotional anguish (Trividh taap). If the Lord is happy upon us he forgives all our faults and can make the impossible happen. One’s life can transform by simply understanding the Lord’s greatness and having true love and affection for Him. A true disciple should maintain continuous remembrance of the Lord’s shower of blessings, grace and love upon him; and act as per His will. By doing this, his life gets transformed.

It is only through His grace that one can have the strength to walk the path of religion. Hence one should always have continuous contemplation of the Lord’s greatness and affection.

Through religion, devotion, intelligence and dispassion for worldly life, ones life is made better, he gains intimacy for the Lord and his soul becomes merged in His divine Murti. One should act as per the Lord’s will and not as per his own wish and let go of his ego and nature,take patronage at the lotus feet of the Lord, that’s when he can be able to take in all advice of the Lord.

The Lord says there are two types of devotion; aadhyatmik devotion and Ahika (worldly) devotion, (through which one achieves worldly life contentment.)

Despite having true determination about the Lord, having an attachment for pleasures of the five sense organs is like being an atheist. 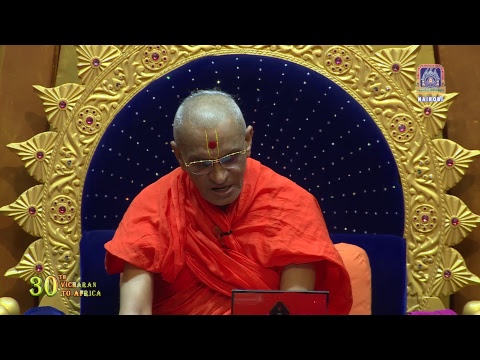