Yogendravarya Sadguru Shree Gopalanand Swamibapa was a great ocean of all virtues. He had all the virtues of Lord Swaminarayan and thus serving Him was equivalent to serving the Lord Himself. He had immense powers, exceptional personality and unrivaled talent.

In an assembly in Gadhpur, He announced that with the blessings of Lord Swaminarayan, He had immense power that He could control the infinite cosmos. The proof of His powers is evident from the occasion of protecting Krushnaram by eroding the moon's eclipse in Vadodara. Yogendravarya Sadguru Shree Gopalanand Swamibapa was the first Heir of Nadvanshi parampara. He held the helm of Swaminarayan Sampradaay for 22 years and provided spiritul knowledge and led thousands of devotees to the path of ultimate salvation.

In Samvat1908, Kartak Sud 15, on 9-11-1851, in a vast assembly and in presence of Acharya Shree Raghuvirji Maharaj and Sadguru Shri Gunatitanand Swami, Yogendravarya Sadguru Shri Gopalanand Swamibapa  assigned the helm of Karan Satsang to Nirgundasji Swami.

On 30th November 2018, it was the 211th Mahadiksha Jayanti of the first heir of Naad Vanshi parampara, Sadguru Shree Gopalanand Swamibapa.

Today, exactly 211 years ago, 23/11/1807, samvat 1864, Kartak vad 8, Shree Swaminarayan Bhagwan gave Bhagwati Mahdiksha (initiation to sant) to Khushal Bhatt and named Him Gopalanand Swami. On this auspicious day, on behalf of all the sants and devotees, Acharya Purushottampriyadasji Swamishree Maharaj offered poojan, arti and prayers to Gopalanand Swamibapa and showerd His divine blessings to the congregation. 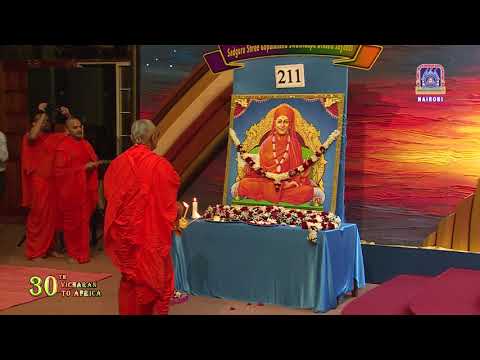