In the Northern Hemisphere the daylight begins to increase hence the Sun ends its zodiacal Southward journey at the Tropic of Capricorn and begins its Northward journey of the Sun known as Uttarayan. This day marks the decline of the winter season. It also marks the end of Dhanurmas.

Sandhya Aarti niyams and kirtan bhakti were performed. In a form of adoration to the Sun as it changes direction, kites are flown and so the sky becomes filled with colour. Acharya Swamishree explained in His ashirwad:-

On the auspicious day of Makar Sankaranti, Acharya Swamishree mentioned that we have to attain the Lord's Murti through our inclination. The Lord has infinite affection for His disciples such that he wants to make them practicioners of yoga. As per Vachanamrut Acharya Swamishree explained that, the inclination of the soul is rotated within the Antah-karans, and is then forced out through the five indriyas. The practitioner of yoga controls the inclination in two ways. With one portion of his inclination, he contemplates on Lord Shree Swaminarayan, who remains within his heart as the witness. He keeps the other portion of his inclination focused outwards through his eyes. With that inclination, He contemplates on the external Murti of God. He concurrently contemplates on the entire Murti, from head to toe. If he becomes lethargic or sleepy whilst contemplating the Murti, he would again fixate on the external Murti. Then, just as children fly kites, he flies a kite inform of the Murti, using string in the form of his inclination, and in this manner, he contemplates on the Murti. In this way, one should contemplate on the Murti through the gnan-indriyas, and then the Murti within the soul should be contemplated on. If a distraction relating to worldly issues arises whilst doing this, one must not forsake contemplating on the Murti. This is the manner of contemplating on God’s Murti according to the Yog philosophy.

On this occasion we pray to the Lord to tie us with the strings of Devotion and help us live our life with temperance through the colors of asceticism. We also pray that in our life we always impress Him with endurance.

Later  the Prasad was distributed to all the devotees to mark the end of this auspicious day. 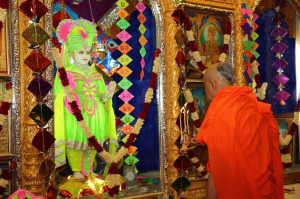 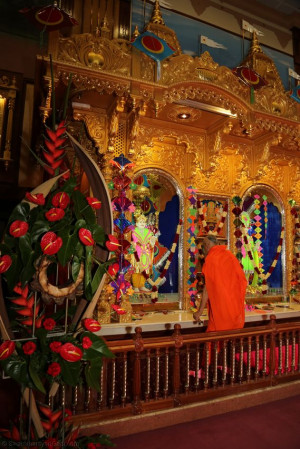 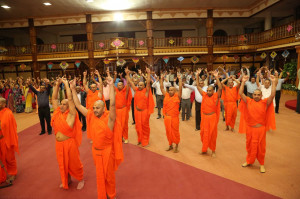 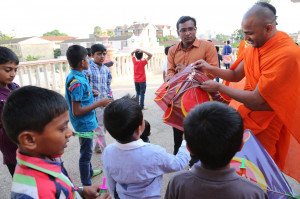 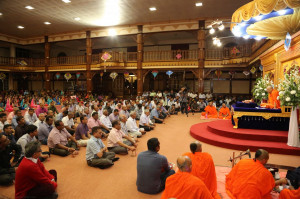 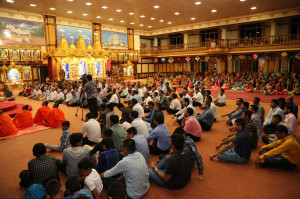