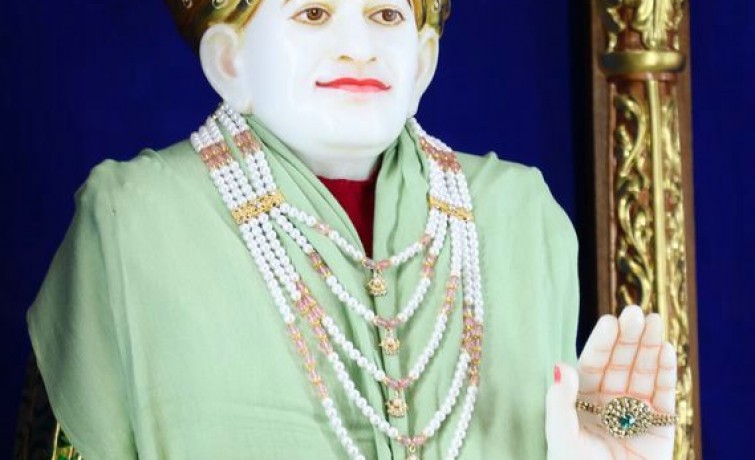 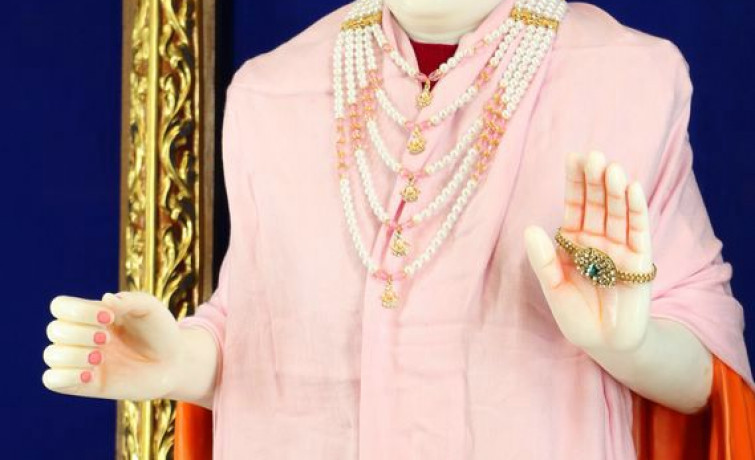 A grand festival is coming up on 28th May 2017 for the 75th manifestation day of HDH Acharya Swamishree Purushottampriyadasji Maharaj.

A grand festival is coming up on 28th May 2017 for the 75th manifestation day of HDH Acharya Swamishree Purushottampriyadasji Maharaj. Temples all over the globe under the umbrella of Shree Swaminarayan Gadi Sansthan are carrying out various activities (bhakti) to please Lord Swaminarayanbapa Swamibapa and HDH Acharya Swamishree Purushottampriyadasji Maharaj for the upcoming festival.

On the auspicious day of Ekadashi, Swamibapa Education Centre in Nairobi held a Satsang Shibir on 10th December 2016. The aim of the Shibir was to demonstrate the daily activities that are performed in Maninagar, the headquarters of Shree Swaminarayan Gadi Sansthan; namely the five aarti, five mansipooja and five scripture recitals (katha).

The Shibir commenced at 5.30am with Kirtan prayer “Purushottam Roop Thai Dhyan Karvu, Preme Thi Paaye Ladi”. This was followed by the first aarti of the day, MANGLA AARTI, performed by HDH Acharya Swamishree Purushottampriyadasji Maharaj. Early morning Vachnamrut Katha for the day was performed by young student of Swamibapa Education Centre. Each participant came with personal Pooja set and performed the entire Pooja niyams as explained by the sants and demonstrated on a large screen. The sants explained how to perform the first mansipooja of the day - PRATAHKAAL MANSIPOOJA.The most auspicious time for this mansipooja is between 4.00- 6.00am. This was followed by a short yoga session which helps one to increase concentration level of the mind and keep the physical body healthy. HDH Acharya Swamishree Purushottampriyadasji Maharaj then performed the second aarti, SHANGAR AARTI, and lit the Satsang Shibir auspicious diyas. Young devotees sang another prathna kirtan and took a short break during which everyone was served with breakfast prasad.

The next session commenced with Prarthna Thaad. The sants explained how to perform the second mansipooja, RAJBHOG MANSIPOOJA, followed by RAJBHOG AARTI. Another young devotee performed the mid-morning Vachnamrut Katha. To seek clarity from the preceding sessions, sants answered questions raised by the audience. Everyone then dispersed for lunch prasad.

There was also a lot of fun for the participants in form of games. Ball games, water games, treasure hunt and many other activities kept the participants busy for much of the afternoon. Teamwork and co-ordination were lessons learnt from the games. After all the physical activities, at 4.00pm, everyone returned back to the prayer hall for UTTHAPAN MANSIPOOJA. The highly talented sants once again explained how to perform this mansipooja. Mid-afternoon katha was recital of one of the episodes from “Jeevanpran Abji Bapashree ni vato”. The entire congregation then sang kirtans till it was time for SANDHYA AARTI. After prarthna and kirtan bhakti, it was time for SAYAMSANDHYA MANSIPOOJA and thereafter evening katha. Fourth katha was recital of an episode from “Muktajeevan Swamibapa ni vato” and the fifth and final katha was an episode from “Purushottam Leelamrut Granth”.

The final session kicked off with kirtan and dhoon, followed by “chesta paad” (daily routines performed by Lord Swaminarayan and composed by Sadguru Shree Premanand Swami). For the fifth and final time sants enlightened the audience on how to perform the last of the five mansipoojas of the day, PODHANIA MANSIPOOJA. HDH Acharya Swamishree Purushottampriyadasji Maharaj also performed the last of the five aartis of the day, SHAYAN AARTI. Being an Ekadashi day, devotees performed utsav and sang shayan kirtan “Podhe Prabhu Sakal Muni Ke Shyam”. The congregation then dispersed with sweet memories of the day’s activities beneficial to all, young and the old, for a virtuous living. 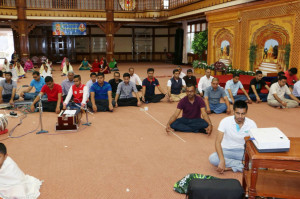 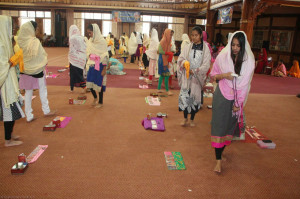 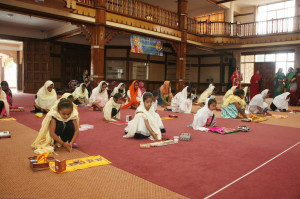 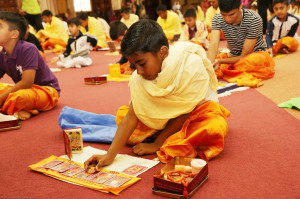 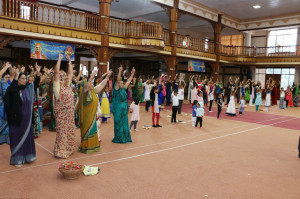 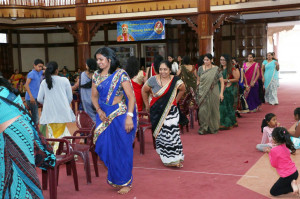