The usually sleepy Narok Town in Narok County came to life on 29th December 2015 as Shree Muktajeevan Swamibapa Pipe Bands entered the town with great pomp and colour to mark 60th Anniversary of its establishment. The pipe bands comprising of teams from USA, London, Bolton, India and Nairobi dressed in Scottish attires and tunes entertained the residents as they held a rally of 3kms from Narok Stadium to SSD Temple. The purpose of the rally was to convey a message of wildlife and environment conservation and the efforts being done worldwide by Shree Swaminarayangadi Sansthan Maninagar to support the same.

Shree Swaminarayan Sidhhant Sajivan Mandal- Nairobi, under the umbrella of Shree Swaminarayangadi Sansthan Maninagar took the right opportunate time and place for the rally to convey a message of wildlife conservation in Kenya, as just a few days earlier, eight lions were poisoned by enraged herders at Masai Mara National Game Reserve. Narok Town was regarded as an ideal place for the rally as it is the gateway to Masai Mara National Game Reserve. The pipe bands showed their support for wildlife conservation efforts made by the county, national governments and other organizations.

Earlier, the institution (Shree Swaminarayangadi Sansthan) showed similar efforts by adopting over 50 elephants at The David Sheldrick Wildlife Trust, an organization dedicated to the protection and preservation of Africa's wilderness and its denizens, particularly endangered species such as elephants and Black Rhino.

For environment conservation and mitigation of Global Worming, members of Shree Swaminarayangadi Sansthan Maninagar planted 600 trees at Karuara Forest- situated within the environs of Nairobi city. The institution equally cares for the poor, the needy and physically challenged members of the human society. During His current tour to Kenya in December 2015, Acharya Swamishree Purshottampriyadasji Maharaj donated a hefty sum to Social Society International, Mombasa (SOS). The society takes care of abandoned infants and children under the age of 10years. He also donated to Mombasa Secondary School, a school for the physically handicapped children. 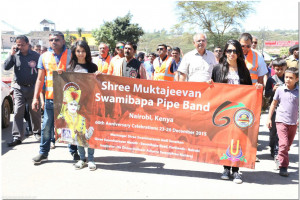 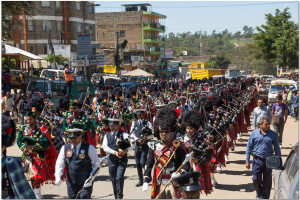 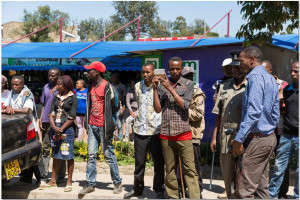 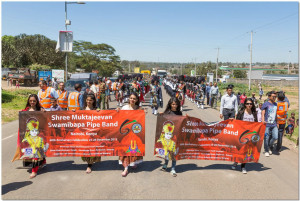 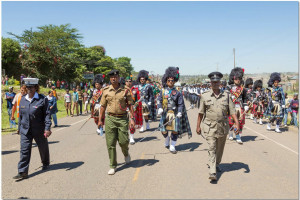