Deepavali festival is celebrated for five days starting with Dhanteras and ending with Bhai Beej, literally illuminating every Hindu with the light of joy. In Hindu philosophy, a central belief is that there is something beyond the physical body and mind that is pure, infinite and eternal, called the Atma (soul).

Deepavali festival is celebrated for five days starting with Dhanteras and ending with Bhai Beej, literally illuminating every Hindu with the light of joy. In Hindu philosophy, a central belief is that there is something beyond the physical body and mind that is pure, infinite and eternal, called the Atma (soul).

Deepavali, also known as "festival of lights", is an ancient Hindu festival and celebrated around the world as the "victory of good over evil", refers to the light of higher knowledge dispelling all ignorance, the ignorance that masks one's true nature, not as the body, but as the unchanging, infinite, immanent and transcendent reality. With this awakening comes compassion and awareness of oneness of all things, victory over dark bondages of ignorance to the effulgence of liberating wisdom. Deepavali is the celebration of, hope over despair, knowledge over ignorance, right over wrong, good over evil.

Lighting lamps in every nook and corner of the house is a symbol of the victory of knowledge over ignorance and light over darkness. The celebration, however, is incomplete without bursting firecrackers in the evening when the sky dazzles with colourful fireworks. A spiritual reason for bursting firecrackers is that the sound created by firecrackers is regarded as the external manifestation of the joy and happiness that people feel within and want to convey to God, who is believed to hear the echoes from his heavenly abode.

With the afore mentioned importance of Deepavali, Hindus from all over flocked Swamibapa Temple in Nairobi On 23rd and 24th October 2014 where the celebrations were held with great delight and compassion. The temple was cleaned and decorated with colourful flowers, lights, candles, rangoli and row of clay lamps shimmering inside and outside. Devotees prepared hundreds of mouth watering delicacies including sweets and snacks. On the evening of Deepavali, everyone was dressed in their best attire and performed "Chopra Poojan".

A grande array of sweets and snacks (Annkoot) was skillfully arranged and presented to Lord Swaminarayanbapa Swamibapa. A Special Thaar and aarti for the occasion was performed as hundreds of people flocked to the temple for this rare darshan.

On the morning of 24th October 2014, New Year Day, Muktajeevan Swamibapa showered His Divine blessings upon the full house congregation in the temple. Hindus from all over flocked to the temple and gleefully embraced each other as a sign to seek forgiveness from each other of any wrong acts performed intentionally or unintentionally in the past and to be mindful of not repeating the same in future.

With the final prayers to The Lord, seeking His blessings for forgiveness of all the sins and guiding them on the true path of salvation in future, everyone dispersed with a huge packet of prasad which included sweets and snacks. 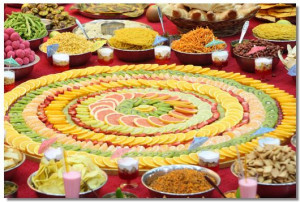 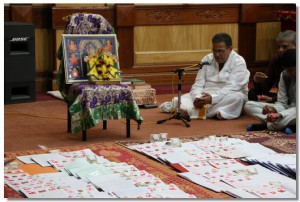 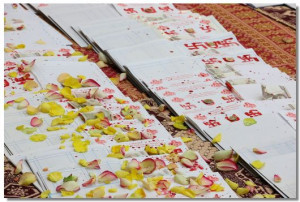 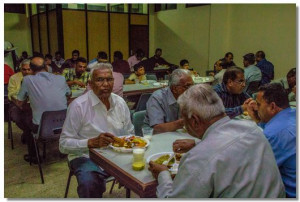