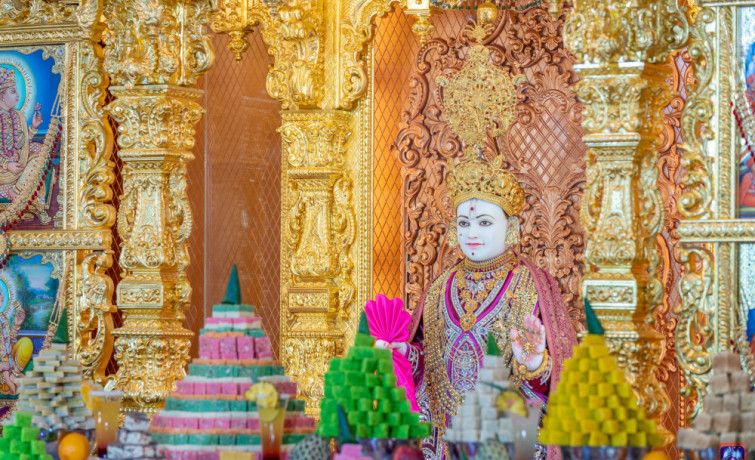 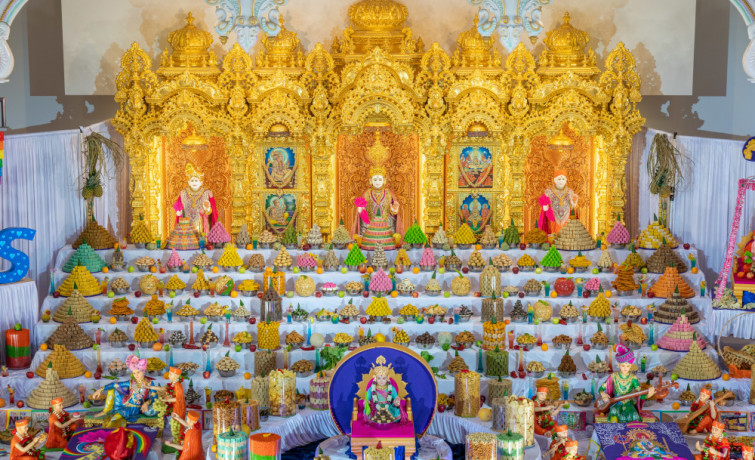 The start of Samvat 2078 was celebrated at Shree Swaminarayan Mandir Kingsbury as thousands of visitors flowed through the Mandir to have the darshan of the Lord amidst a wonderful Annakut.

Hindu New Year fell on Friday 5th November 2021, marking the end of the Diwali celebratory period and the beginning of the new Hindu year. 2020’s celebrations were largely observed online due to the lockdown conditions, and so it was especially joyous for the Kingsbury Mandir to have been able to gather with family and friends at the Mandir this year.

This year’s Annakut carried two themes. Shree Swaminarayan Gadi Suvarna Mahotsav takes place next year, marking 50 years since the momentous and auspicious occasion in 1972 when Jeevanpran Swamibapa gave physical embodiment to Shree Swaminarayan Gadi. A ceremonial set of scales, Tula, were within the Annakut, preluding to the Tula ceremony that will take place during the Suvarna Mahotsav in September 2022, during which Shree Swaminarayan Gadi will be weighed against pure gold. The Annakut also paid thanks to the NHS for their endeavours throughout the past couple years and celebrated the Mandir’s role in the fight against the pandemic. Earlier this year, the Mandir became the first Hindu temple to hold a vaccination centre, and many other charitable campaigns were also run throughout the pandemic period.

Lord Shree Swaminarayanbapa Swamibapa and Ved Ratna Acharya Swamishree Maharaj were surrounded by sweets, savouries and delicacies that had been lovingly prepared by disciples at the Mandir – thousands of visitors marvelled at the magnificent Annakut. Covid safety was paramount throughout the event; the issuance of tickets meant that visitor numbers were spread through the day, social distancing could be maintained, and everyone could enjoy their darshan safely and comfortably. Face coverings were worn by all visitors, demonstrating everyone’s care and regard for one another.

Celebrations began with ucchav and Annakut Aarti at 8am, and the offering of the Annakut thaar to the Lord. Jeevanpran Swamibapa then showered his divine blessings to all, before everyone had the honour of offering Aarti to Lord Shree Swaminarayanbapa Swamibapa and Ved Ratna Acharya Swamishree Maharaj. The congregation concluded with dhoon before everyone collected their Prasad. The Mandir then opened to visitors until the evening – thousands of whom came for darshan, including dozens of councillors, MPs and dignitaries. 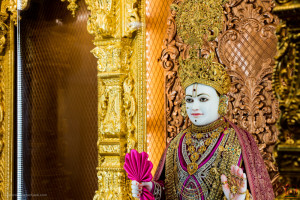 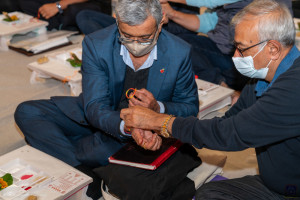 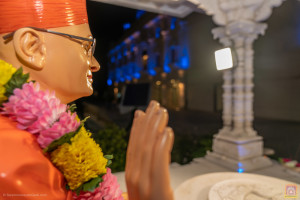 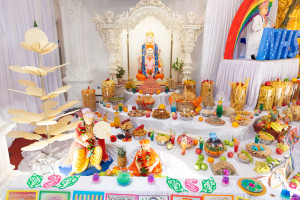 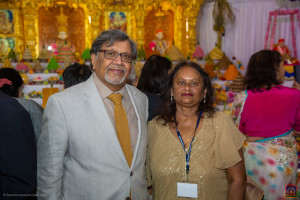 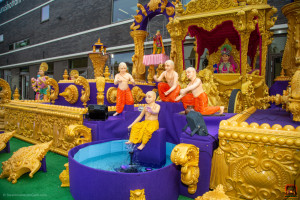