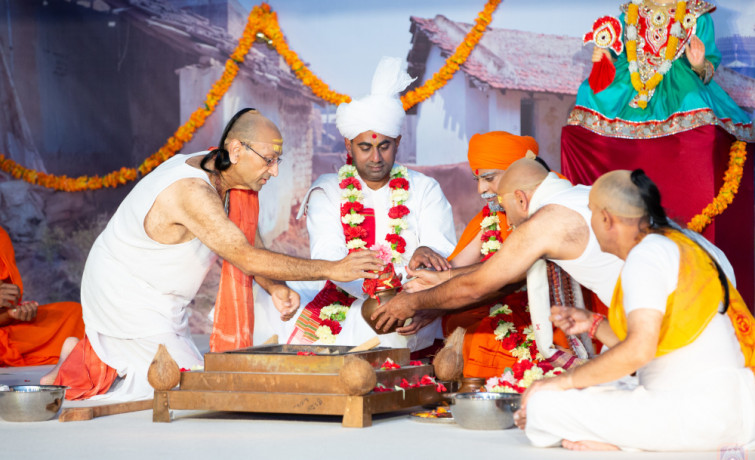 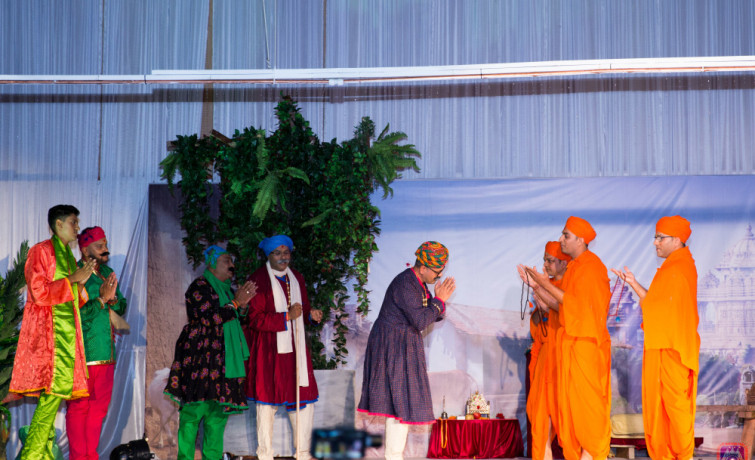 The entire production was developed and delivered by the Sants and disciples, from script-writing to directing, through to stage creation and management, sound and music – and of course, the actors themselves. The synopsis of the drama is as follows:

In Samvat 1958 (1901 CE) 2 ½ year old Shree Vasudevprasadji Maharaj took over the role as Acharya of the Ahmedabad diocese of the Swaminarayan Faith. A group of ‘trustees’ entrusted with administrating the tasks that he would need to perform, eventually led him to believe that the assets of the Sampraday were his own personal wealth. To protect the assets of the Faith, and save the principles and doctrines the supreme Swaminarayan Sampraday from this kind of corruption, Jeevanpran Shree Abji Bapashree and Sadguru Shree Ishwarcharandasji Swamibapa established the trust, Satsang Mahasabha.

A grand shikhar-band Mandir was built in Muli by the command of Lord Shree Swaminarayan. Muli Mandir was seen by the Acharya, Shree Vasudevprasadji Maharaj, as a rich source of income for himself, and tried to seize control of its assets. The disciples of Muli remained firm and did not allow any change in the Mandir administration. Sadguru Shree Ishwarcharandasji Swamibapa and other eminent Sants and disciples requested Jeevanpran Bapashree to come to Muli so that He could alleviate the unrest. Bapashree sent a group of leading disciples to the Acharya to invite him to Muli, so that the dispute could be resolved. However, his advisors did not allow him to go and the tensions between the two factions of the Sampraday continued.

As the Centenary of Muli Mandir approached, Sants and disciples asked Bapashree if they should celebrate the centenary of Muli Mandir. Not only were there disputes about control of its finances, but also, it was a year of drought and therefore disciples would not be able to give generous donations to pay for the costs of the celebrations. Jeevanpran Bapashree said that the centenary should be held, and declared that there would be rain. According to His words, it did indeed rain and disciples made generous pledges. However, opponents got a legal stay issued preventing the celebrations from taking place. Disciples went to Bapashree for guidance. Jeevanpran Bapashree said, ‘It is My celebration; who is going to stop it!’. Taking Bapashree’s blessings, the disciples commenced legal action to have the ‘stay’ revoked.

Invitations were sent everywhere, but opponents sent false messages that there had been murders in Muli and the Centenary would not be celebrated.

Jeevanpran Bapashree and Shree Ishwar Bapa reached Muli. Due to the uncertainty about whether the festival would take place, no arrangements had been made for mattresses or blankets for disciples. To mitigate this, Shree Ishwar Bapa asked Bapashree to make the cold go away. Bapashree replied, ‘The cold will be given leave for 4 days, whilst the celebrations are being held.’ Immediately, the weather became warmer so there would no longer be any need for blankets. Bapashree sent Shree Ishwar Bapa to the kitchens where the food was being prepared and asked him to report back how much ‘shiro’ (sweetened wheat) had been made. When Ishwar Bapa reported back, Jeevanpran Bapashree said that no more should be made. However, other Sadhus insisted that more was required because of the numbers of disciples seen to be arriving. They said it was a matter of honour the food not run out. Bapashree replied, ‘It is My festival. It is My honour that will be marred if the food is not sufficient. Do not worry. I will not allow even half of this shiro to be used up.’ Bapashree went to the kitchen and placed a few pieces of consecrated candy sugar (sakar) into each huge vat of shiro.

For the duration of the celebrations, disciples ate as much shiro as they wanted to. Afterwards, they were permitted to take as much as they could back home. Numerous carts full of shiro were sent to all the surrounding villages.

During this final act of the drama, everyone in the audience received freshly prepared Shiro Prasad!

Such is the unsurpassed prowess of Almighty Jeevanpran Shree Abji Bapashree, whose Shatamrut Mahotsav marking His 175 years will be celebrated by Acharya Swamishree Maharaj in 2019 at His eternal home, Shree Swaminarayan Mandir Maninagar. 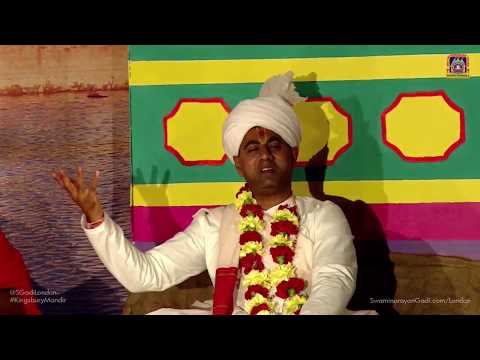 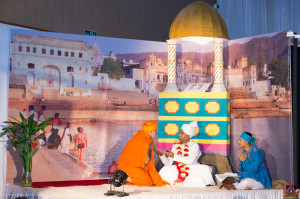 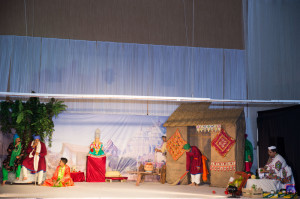 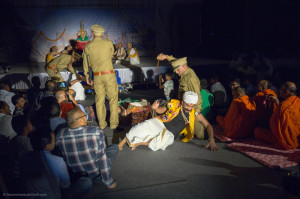 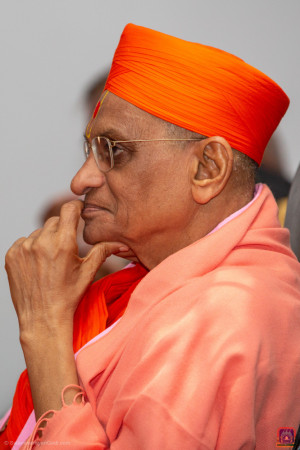 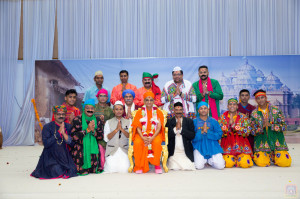 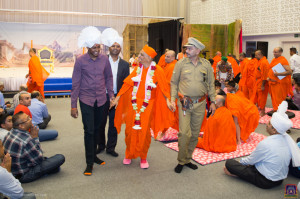