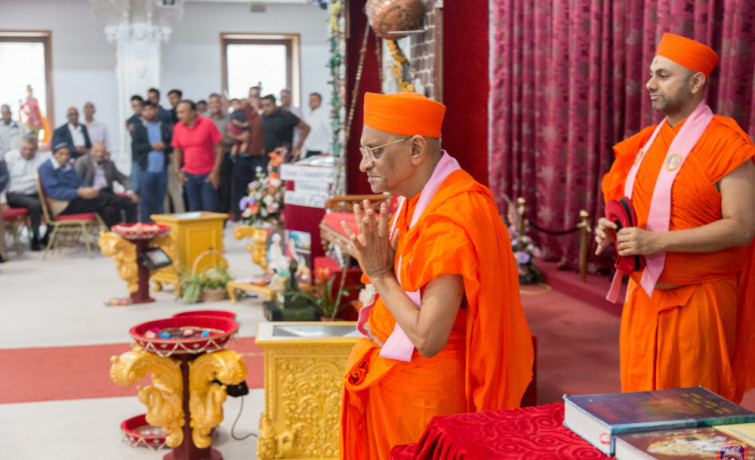 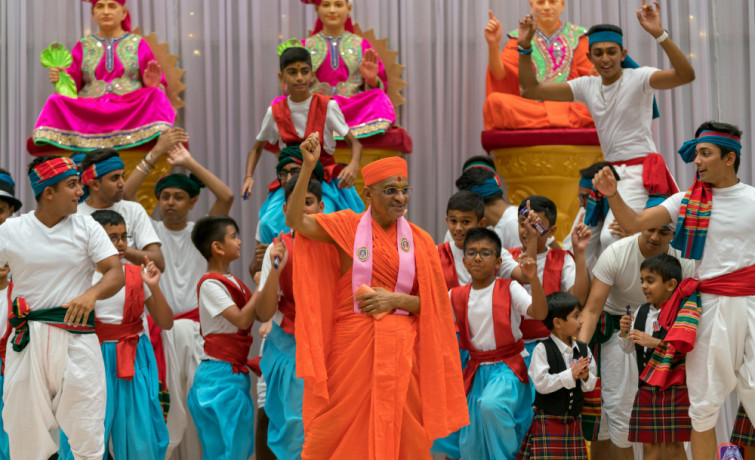 Arrival in London from USA

With Maninagar Shree Swaminarayan Gadi Sanstha spread so far and wide across North America, Acharya Swamishree travelled tirelessly to the Mandirs and homes of His loving disciples residing there, fulling the spiritual desires of many thousands. Still, on His return to London after what any ordinary person would have found an exhausting excursion, He was full loving smiles for disciple residing here - several hundred of whom had gathered at the Mandir, eagerly awaiting His return.

That evening saw a special presentation of Bhakti Nrutya – devotional dances performed by the students of Shree Muktajeevan Academy of Performing Arts, all under the theme of the life, achievements and greatness of Jeevanpran Abji Bapashree. Following, Sandhya Aarti, Acharya Swamishree Maharaj also concluded the festive Hindola period.

Throughout the Hindola festival, visitors to the Mandir had the divine darshan of Lord Shree Swaminarayanbapa Swamibapa presiding on a variety of intricately decorated swings. Today’s final Hindolo, created by the young students of Swamibapa Gujarati School, was themed around education, with a particular focus on one of the famous childhood episode of the Lord, during the early days of His education. In this episode, His father, Shree Dharmadev, places a gold coin, a sword and a holy scripture in front of the young Lord to find out what He would be most interested in when He grew up. The Lord immediately grabbed the scripture and was totally disinterested in the coin and the sword – demonstrating the importance of Gnan, spiritual knowledge, above and beyond all other pursuits.

The Sabha then moved to Purushottam Mahal, where the Bhakti Nrutya was held. Youngsters pleased Lord Shree Swaminarayanbapa Swamibapa and Acharya Swamishree Maharaj with their dances, having devoutly practiced for month in advance – the delight on each and every performer’s face was clear to see. The dances were all performed to a reverential kirtan about Jeevanpran Abji Bapashree, interspersed with video presentations depicting His immense glory and prowess. During the finale, Acharya Swamishree Maharaj couldn’t resist the love of His disciples, and joined them on stage, much to their great fortune and glee. The evening concluded with every receiving Prasad, in the form of punnets of fresh strawberries. 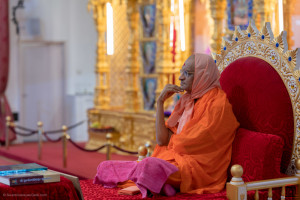 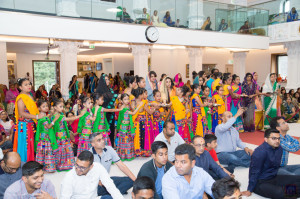 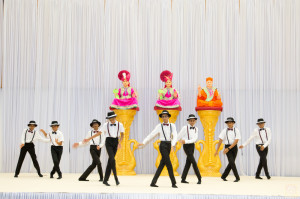 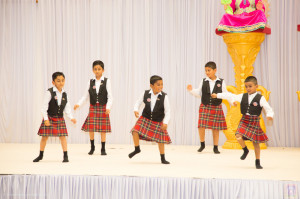 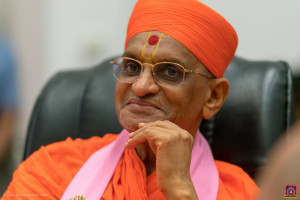 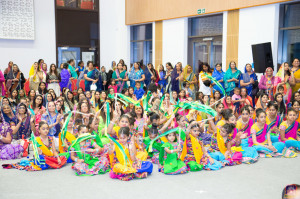