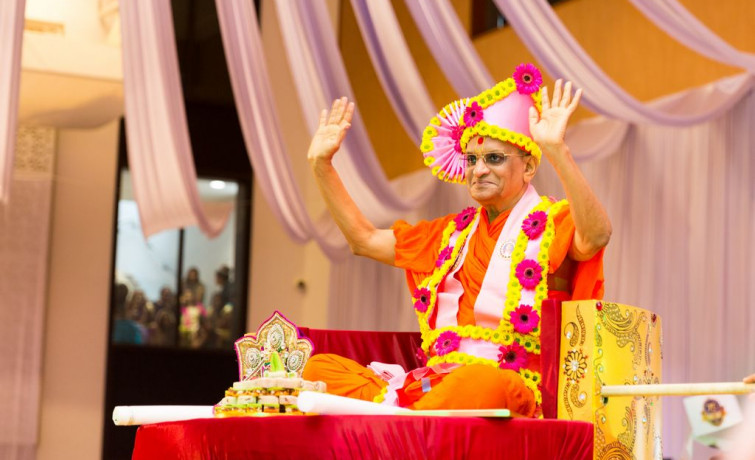 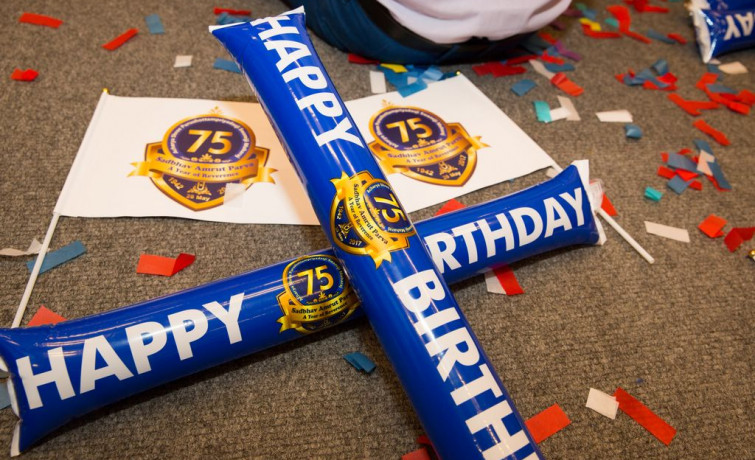 The event kicked off with Acharya Swamishree Maharaj making His way from the Mandir to Purushottam Mahal, adorned in beautiful flower garments, where the brim-full sabha was awaiting His divine darhan. On entering the sabha to raucous applause, jubilation and the thunder of dhol drum, He presided on a circular central throne that had been especially created so that 75 individual dishes of sweets could form an Annakut around Him in three tiers. As young disciples playing the role of deities delivered the sweets, each functional group and department had the opportunity to pay thanks to Acharya Swamishree Maharaj for inspiring their own activities. This part of the evening was to demonstrate that the sole reason behind the flourishing of all aspects of the Mandir’s activities was none other than Acharya Swamishree Maharaj.

The sponsoring disciples then performed poojan in the form of Panchamrut Snan to the lotus feet of the Lord and by showering Acharya Swamishree Maharaj with gold flowers and crystals. Young disciples then conveyed three episodes from Acharya Swamishree Maharaj’s life – when He was an infant, a primary schooler, and finally a teenager –  in the form of short plays.

Sant Shiromani Shree Sarvatmapriyadasji Swami then had the opportunity to please the Lord and address the sabha. During his short speech, he prayed to Lord Shree Swaminarayanbapa Swamibapa that Acharya Swamishree Maharaj come back to London in 25 years to celebrate His Shatabdi (centenery) with the same pomp and glory as today – sending the sabha into an ecstatic applause. Nearly 50 youngsters, some as young as 5, then performed a devotional dance to an especially composed birthday kirtan.

Immediately after everyone had the opportunity to perform Aarti to Lord Shree Swaminarayanbapa Swamibapa and Acharya Swamishree Maharaj, the entire sabha stood to recite a prayer in unison to the Lord. A fitting end to a fantastic evening, and a befitting finale to the international legs of the Sadbhav Amrut Parva festival. 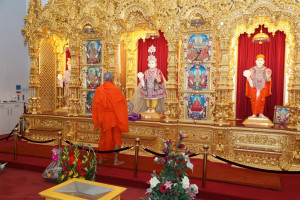 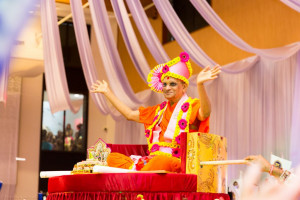 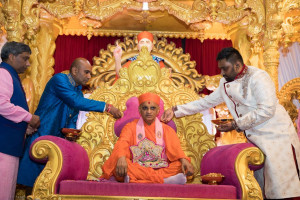 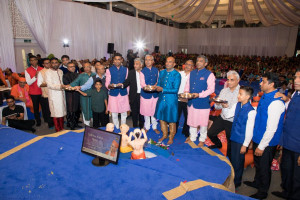 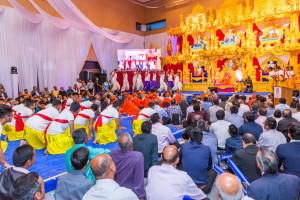 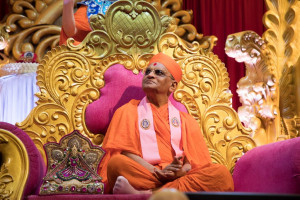