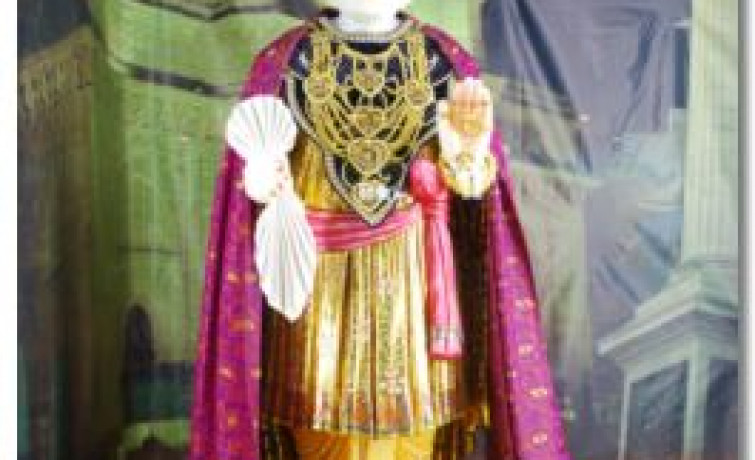 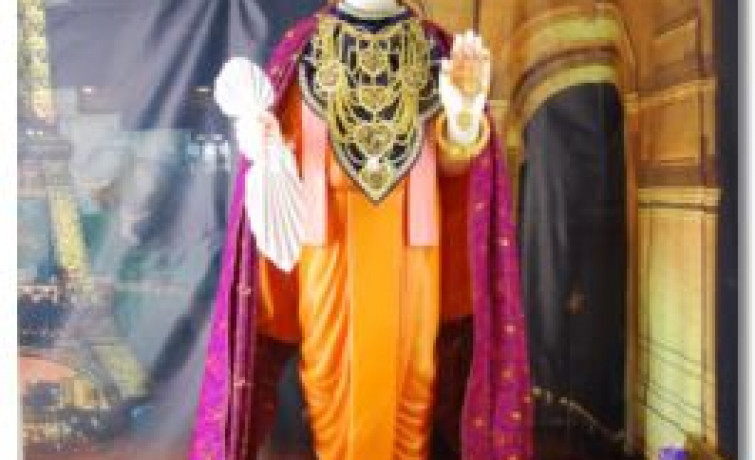 In celebration of the 8th Patotsav (anniversary of the installation of the divine Murtis of Lord Swaminarayanbapa Swamibapa) of Shree Swaminarayan Temple London, a three-day scripture recital was held in the divine presence of His Divine Holiness Acharya Swamishree Purushottampriyadasji Maharaj. The festivities took place between Friday 22nd and Sunday 24th August 2008.

The recital was the first of the recently published English translation of the Rahasyarth Pradeepika Tika sah Vachanamrut. The translated scripture was released in October 2007, during the Shree Mukatajeevan Swamibapa Shatabdi Mahotsav. The recital was held on behalf of Shree Muktajeevan Pipe Band, London; each of the Band’s 52 members took part in the recital itself.

On the first evening of the celebrations, Acharya Swamishree Himself initiated the scripture recital by eloquently orating in English. Later, a documentary was shown in the congregation, charting Shree Muktajeevan Pipe Band’s long and esteemed history. The documentary described the origins of the Band as established by our beloved Gurdev, Jeevanpran Shree Muktajeevan Swamibapa, through to its evolution into full Scottish tartan under the divine tutelage and guidance of Acharya Swamishree.

On the second evening of festivities, a number of eminent guests visited the Temple for Lord Swaminarayanbapa Swamibapa’s and Acharya Swamishree’s divine blessings. During this evening, it was momentously announced that Shree Swaminarayan Siddhant Sajivan Mandal London had successfully acquired new property on which to establish a new Temple. The Temple had long sought suitable premises into which it had intended to expand its congregation and activities; by the divine grace of God and the direct guidance and inspiration of Acharya Swamishree, premises that meet all of the Temple community’s requirements has now been found. Amongst the guests were the Rt Hons Tony McNulty (MP for Harrow East) and Mr Barry Gardiner (MP for Brent North), who along with other councillors from Brent, Barnet and Harrow, expressed their delight for the Temple’s success, and pledged their fullest support to the Temple for the coming years.

A new ‘drummers fan fair’ was performed by the Drumming Corps of Shree Muktajeevan Pipe Band and students of Shree Mukatjeevan Dhol Academy. The fusion of Indian dhol beats with Scottish snares and tanners perfectly epitomised the harmony that exists between disciples from the Temple and the local community, and symbolised the integration of the congregation’s traditional values with western culture. Mr Barry Gardiner in particular, being of Scottish heritage, was especially delighted with the performance, and was awestruck at the Scottish band major’s uniform adorned by Shree Ghanshyam Maharaj on this occasion.

The third day of celebrations commenced with Acharya Swamishree performing the auspicious shodshopchaar poojan of Lord Swaminarayanbapa Swamibapa to initiate the Patotsav ceremony. Thereafter, Acharya Swamishree presided over the traditional flag raising ceremony. The sants assembled an array of lavish food items in the form of an annkut before the supreme Lord, and everyone was given the opportunity to offer aarti. The recital of the Vachanamrut scripture was then concluded as members of Shree Muktajeevan Pipe Band offered chhaabs of gifts to Lord Swaminarayanbapa Swamibapa. Acharya Swamishree showered His divine ashirwad on the 1400-strong congregation, before the three-day festival concluded with everyone taking a consecrated lunch. 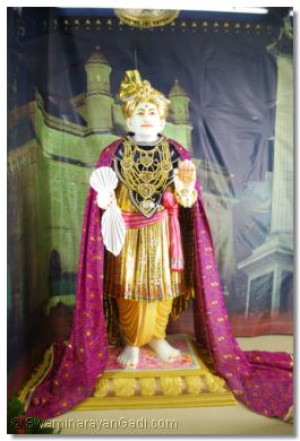 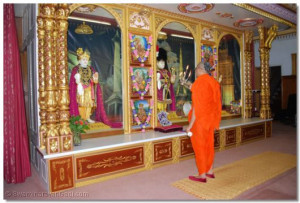 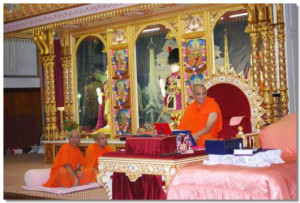 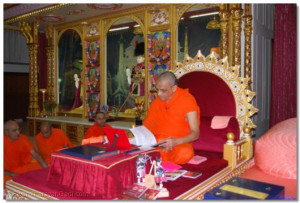 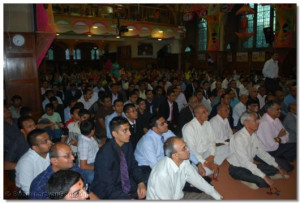 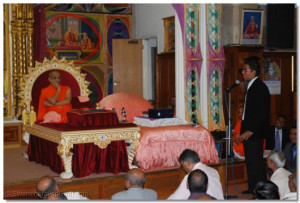