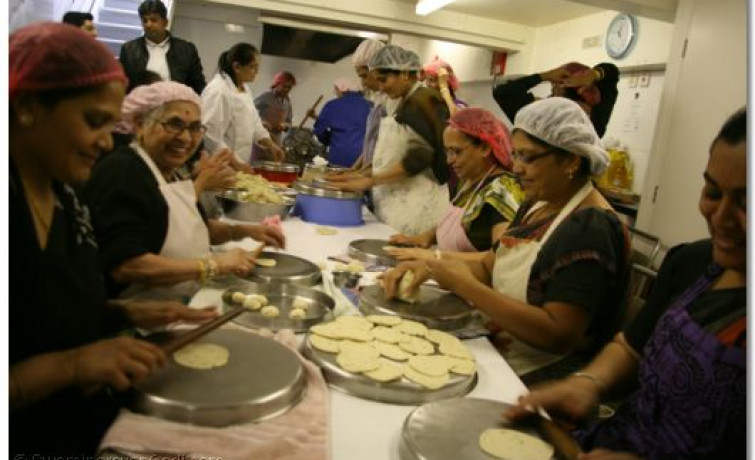 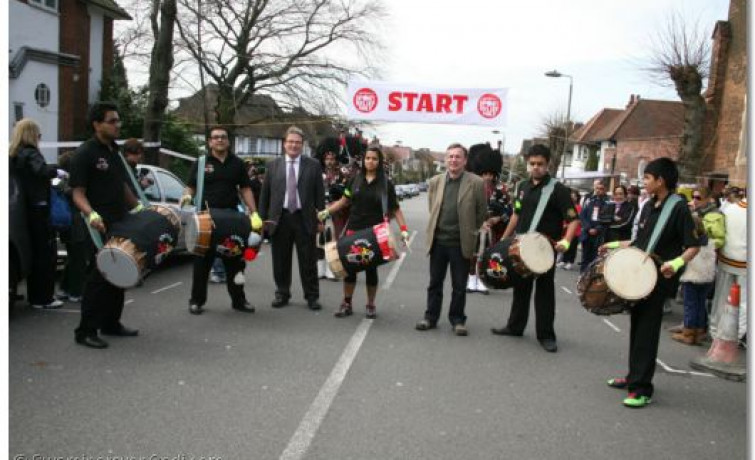 The Temples decision to support this cause some several months prior came with a vision of the Golders Green Swaminarayan Gadi Sport Relief Mile 2010 being an event to bring the multi faithed, multi cultured local community together in a celebration of the unity in our diversity for this important cause in line with the overall charitable objectives of the Temple.

It was also to be a part of a continuing celebration of 10 years of Excellence of multi talented members of the Shree Muktajeevan Academies.

For the hundred or so volunteers of the Temple involved D-Day dawned with the commencement of preparations for the day. From the food to the marquee, to the stalls and hospitality to the road closure arrangements - this day was to be a culmination of over three months of not only rising to the challenge but of the diving head long and immersing themselves into the creation and implementation of strategies for the plans of action. The real challenge for them was whether they would emerge not only unscathed but victorious in their vision of this celebration.

As a magnificent March spring sun rose to a high noon on Sunday 21st March 2010 people all around the nation and indeed in many countries across the world were also rising-rising to the challenge.

Hindu, Jewish and Christian leaders enlisted themselves to play their part in weaving together the multi coloured patches in this blanket of unity in diversity in the Swaminarayan Gadi Golders Green Sport Relief Mile.

As the eleventh hour approached, the resounding beats of the Shree Muktajeevan Dhol Acadmey drums echoed to a crescendo of thunder around Golders Green to call upon and proclaim that the battle was about to commence, the swirling sound of the Shree Muktajeevan Pipe Band floated across Golders Green to lead the army of runners and well wishers to gather at the pre appointed time and place.

The 500 strong eager runners of all denominations soon encamped themselves around the start line. Some got anointed with paint from the face painting crew of the Temple to give them a mark of significance of the day whilst others acquainted themselves to the map for the mission ahead.

At the beckoning of the Shree Muktajeevan Dhol Academy drummers they were soon queued up in rows behind the Scottish Military Regalia clad Shree Muktajeevan Pipe Band. Then as the pipes stopped and the sounds of the drums faded away to be replaced with the conch like sound of claxons - the sea of tartan clad pipers and drummers parted to make an avenue through which the hundreds of eager runners poured forth across the start line.

The Pipe Band initially led the runners - motivating and inspiring them to go forth to do battle with the course. Along the route some runners were dressed as chickens others as clowns, and even Batman and Robin made an appearance!!

People from across the community, of all ages, faiths and backgrounds, the fit and the less fit, united to run, walk, hop, skip or jump – some hand-in-hand, others leg-to-leg took part in the run. Some ran 1 mile others three and some six miles –- all in support of Sport Relief! The runners were cheered by well wishers along the route including Finchley Road and Golders Green Road. As all these brave and noble heroes eventually returned having conquered some personal goals and achievements, tired and weary but feeling exhilarated with the thought of reaching their personal milestones.

The spiritual sanctity of the temple appeared to soothe and relax them as they were treated to a taste of India by Temple volunteers. They sat and enjoyed food together - the standing, the wounded and walking wounded alike reflecting back on the day’s events with pride in the thought that today at least they rose to the challenge and did indeed play a part in help make the world of difference to the underprivileged across the globe.

The Golders Green Shree Swaminarayan Gadi Temple Mile was the only Sainsbury’s Sport Relief mile event in North West London and the race hosts – laid on a treat to make this a truly memorable multicultural charity event for all.

The race was sold out days before and early indications are that the funds raised in the same event in 2008 (just over 12,000) will be exceeded - by a mile!!

Guest Tony McNulty MP for Harrow East said “Every time there is a community event in North London, the Golders Green Temple is right there in front making sure the community takes part”.

An onlooker added “the Temple really did go the extra mile by generously providing such great food and entertainment and organising this truly memorable and unique, extravaganza – this has made all the difference for me”.

If this wasn’t enough 22 young lads of average age of 15 from the Shree Swaminarayan Gadi Pipe Band Bolton were rising with the dawn to make their way to play at London’s Flagship Mile event on Victoria Embankment.

It was still dark when they boarded cars and vans to commence the 500 mile round trip to London they had each volunteered to play at this charity event and bleary eyed or not they were determined to support the Sport Relief cause.

Thousands lining the Embankment were entertained as they motivated the runners with a unique blend of Scottish jigs and reels as the dhol players added to this east west fusion spectacle. Millions also watched live on television as the race commenced with a crescendo of swirling pipes and thumping beats of the dhol drums the sound seemed to be carried by the cool gentle breeze down the River Thames as if to travel as rhythmic accompaniment for runners as they ran down the Embankment.

One onlooker said “this is truly amazing a show of the diversity of this country could do with this harmonious blend of cultures being promoted at London’s Olympic Games…I can’t believe these lad have come from so far to play for an hour or so.. Now that is going the extra mile…!.”
And another added “ …so good to see such young people getting involved in such things in this way…we should be grateful and proud of what the Indian culture brings us…I feel like dancing the whole mile to their tunes”.

The band then made their merry way back to Bolton to welcoming beds for tired limbs but smiles on their faces with the knowledge that today they did indeed rise to the challenge and slept well in the proud comfort of knowing they did indeed make a difference to the life of some youngsters somewhere by helping raise part of the millions raised this weekend.. It was worth it just for that.

Now that is going the extra 500 miles for the Sport Relief Human Race!! 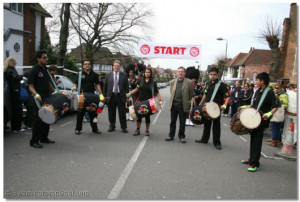 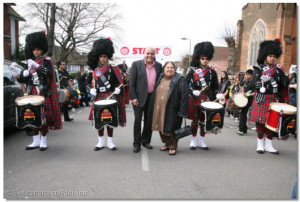 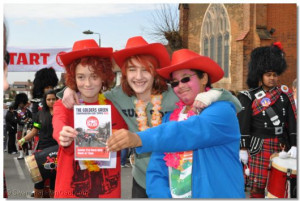 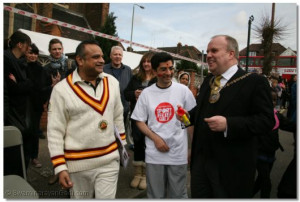 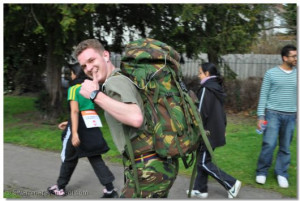 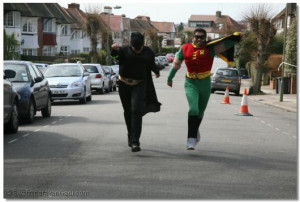