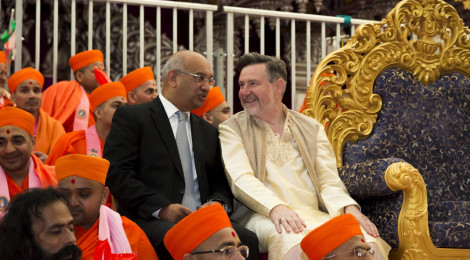 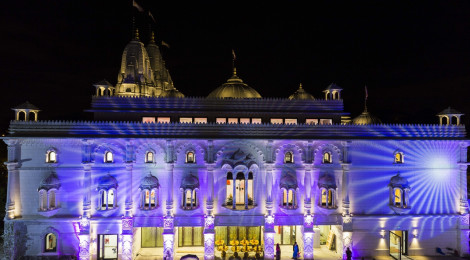 The evening of Tuesday 19th of August saw the official start of the Shree Swaminarayan Mandir Kingsbury Grand Opening festival. It began with a special Opening Ceremony, witnessed by disciples, locals and distinguished friends of the Mandir including many dignitaries, including Keith Vaz MP, Barry Gardiner MP, Andrew Dismore, and the Kenyan High who attended the event as special guests of Acharya Swamishree Maharaj.

The sabha mandap of the jagaan was transformed into a three sided arena with a central performance area and large screen displaying footage of historic events at the heart of the sansthan’s development. The ceremony retold the epic journey the London Sansthan has had from the first handful of disciples who travelled to London under the instructions of Shree Muktajeevan Swamibapa, with very little other than the bags they carried with them; to the current day where we have witnessed the creation of a  magnificent sikharband mandir, inspired by Acharya Swamishree Maharaj.

Highlights of the ceremony included the opening prathna to Lord SwaminarayanBapa Swamibapa to bless the festival; the interactive environment recreating the cold, wet and windy conditions as experienced by the early settlers; the many dances performed by disciples; the magnificent fusion of sound and sight of two cultures; and historic footage of Shree Muktajeevan Swamibapa’s leela on his visits to London and the UK. Particularly emotive were the depictions of the hardships that the early disciples had to face within a community that was unprepared for the encroaching multi-culturism of this great city and the transitions of the community from each site the Mandir has occupied.

To finish the ceremonies, disciples from London, Manchester, India and Nairobi danced to the kirtan ‘Mukti Foj’ and led Acharya Swamishree from the arena through the courtyard to the front of Kinsgbury Mandir. Acharya Swamishree officially opened the doors of the Mandir and led the dignitaries inside.  Here he was adorned with vagha resplendent in LED lights and was taken to the courtyard where he inaugurated the intricate light displays of the mandir and set off a spectacular light show.

The opening ceremony event was a fantastic treat for the large audience who left the arena enthusiastically anticipating the delights of the performances lined up for each day of the Kingsbury Mandir Grand Opening.