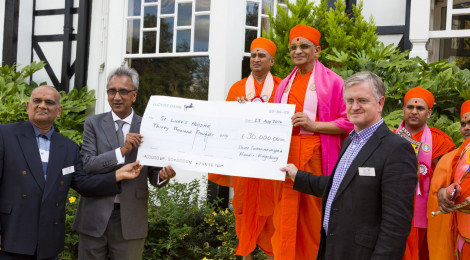 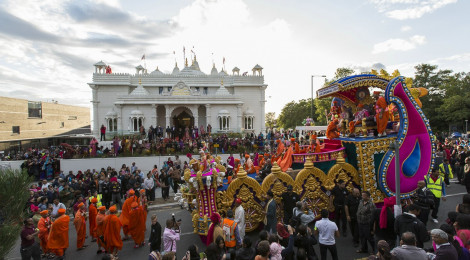 Saturday the 23rd of August 2014, provided a second chance for viewing the magnificence of the Nagaryatra (processions) arranged by Shree Swaminarayan Gadi Sansthan. On this occasion, the procession was held through the streets of Harrow and Brent to celebrate and announce the arrival of the new Shree Swaminarayan Mandir Kingsbury to the locality.

The start of the nagaryatra was from St Luke’s Hospice in Kenton, our charity partner for the Kingsbury Mandir Grand Opening Festival. To commemorate this relationship Acharya Swamishree Maharaj visited the hospice and was welcomed by Lord Dolar Popat, John Macdonald, Ramesh Bahnderi and Claire Buckland, the trustees of the Hospice. Acharya Swamishree toured the hospice and gave darshan to the trustees, staff and patients, before speeches and presentations were made in front of the Hospice. Acharya Swamishree then presented a cheque for £30,000 to the trustees from funds raised by the Mandir for the hospice through various events (including skydiving, open-water swimming and a midnight walk).

After a salute by Shree Muktajeevan Pipe Band and a cultural dance performance by members of Shree Muktajeevan Arts and Culture Academy, Acharya Swamishree left in His chariot to commence pooja and proceedings for the Nagaryatra.

The procession commenced along Woodgrange Avenue and moved along to join Kenton Road, and make its way up towards the Mandir along Kingsbury Road. Along the route thousands of people came to witness the spectacle of intricately decorated floats, thunderous dhol drums, beautifully costumed dancers, carnival performers, marching cadets and the Mass Bands of Shree Swaminarayan Gadi. The long parade of performers of all ages, entertained the crowds along the route. At Kingsbury Circle the Mass Band of over 120 pipes and drums wound its way around the roundabout, filling the air with their melodious tunes. Lord SwaminarayanBapa Swamibapa and Acharya Swamishree Maharaj gave darshan to disciples and observers all along the route, while seated upon ornately decorated chariots, expertly created by disciples and sants of the sansthan.

As the procession passed Roe Green Park, the sikhars and kalaas of the temple became visible on the skyline and provided renewed vigour to the disciples as they entered the final stages of the nagaryatra. Then after over three hours of festivities the parade reached Kingsbury Mandir, where the participants spilled into the courtyard of Shree Muktajeevan Swamibapa Complex. Acharya Swamishree was venerated with pooja at the gateway to the mandir before entering the mandir while being regaled by the Mass Pipe Bands and chanting disciples. Inside the mandir, the chants continued and were accompanied by dancing majors as the sound levels rose with the excitement of the congregation. To conclude events of the evening Acharya Swamishree performed aarti to Lord SwaminarayanBapa Swamibapa and bestowed blessings on all participants of the Nagaryatra.

Everyone received prasad meals and ended the day with their hearts filled with great pride and happiness generated from another marvellous event for Shree Swaminarayan Mandir Kingsbury Grand Opening Festival.