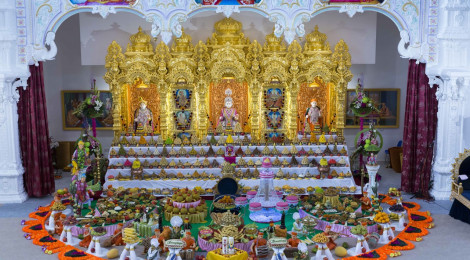 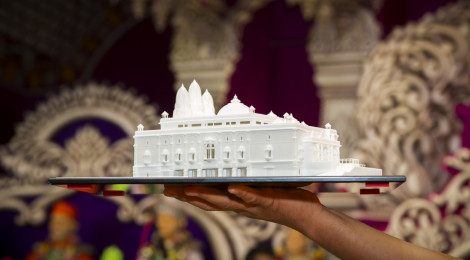 The final day of the Shree Swaminarayan Mandir Kingsbury Grand Opening (Sunday 24th August 2014) began with Acharya Swamishree Maharaj and sants performing the shodashopchaar poojan of Lord Swaminarayanbapa Swamibapa in their magnificent gold sinhasan. During the poojan Acharya Swamishree showered the murti of Lord SwaminarayanBapa Swamibapa in gold flower petals, followed with aarti to all the murti. During the poojan rituals the mandir hall and balcony were packed with disciples seeking darshan.

After poojan Acharya Swamishree was let to the Sabha Mandap by the Massed Bands of Shree Swaminarayan Gadi. On this Grand occasion eminent scholars from Hindi organisations in Kashi, Haridhvar and Rishikesh represented by Shree Akhileshji Mahray endowed Acharya Swamishree with the honorary title Vishwa Vatsalya Mahodadhi - Greatest Ocean of Spiritual Love and Compassion for the entire world, a fitting designation for our beloved Swamishree.

Following the presentation, Acharya Swamishree blessed the congregation with his divine ashirwad, stating:


On the final afternoon of the Shree Swaminarayan Mandir Kingsbury Grand Opening Festival , a magnificent annakut was arranged before the murtis of Lord SwaminarayanBapa Swamibapa consisting of numerous foods and sweets lovingly prepared by sants and disciples. Many items were decorated as food carvings and interspersed with murti of Lord SwaminarayanBapa Swamibapa and figures of sants playing instruments within a beautiful scene. The centre piece was a crystal cake stand in rotating coloured lights. Acharya Swamishree Maharaj and sants performed annakut arti for the first time in this Mandir, to the delight of the gathered disciples.

Following annakut darshan, Acharya Swamishree was welcomed into the Sabha Mandap by a nrutya by young disciples dancing to the kirtan Valiro e Valiro. During the kirtan, Acarya Swamishree was led to a seat upon a pedestal gadi arranged in the centre of the mandap, from where the whole sabha could receive his divine darshan. From here Acharya Swamishree personally presented ladva prasad to the many sant and disciples who contributed to and supported the mandir building project and helped in realising the dream that Shree Muktajeevan Swamibapa had of building a sikharbannd mandir in the great city of London.

To celebrate this achievement, sants and disciples joyously played raas around Bapa’s murti. Acharya Swamishree blessed disciples with Prasad as they played raas. As the music gathered pace the raas players started to wave flags and built a crescendo of colour and sound as confetti bombs filled the air. As the raas came to a finale sants played fuderi around Bapa, as he gazed on loving at his disciples enjoying themselves.

As a final thank you and in gratitude of the feats Lord SwamnarayanBapa Swamibapa helped everyone achieve leading up to and during the Grand Opening festival, trustees and committee members of London presented Acharya Swamishree with a 3D model of the London temple to place in Maninagardham as a memento of the joyous days of the festival.