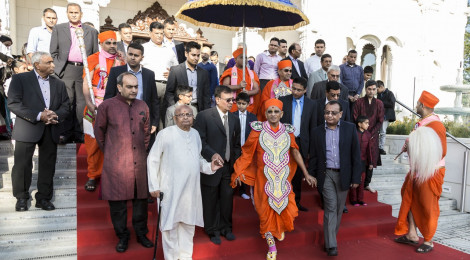 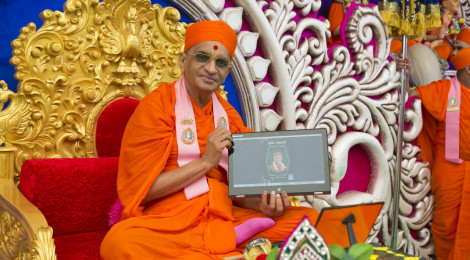 The morning of the Kingsbury Nagaryatra (Staurday 23rd August 2014), also saw the conclusion of further parayan (scripture recitals) held on behalf of disciples to please Lord SwaminarayanBapa Swamibapa. Acharya Swamishree Mahraj blessed, in the presence of Lord SwaminarayanBapa Swamibapa within the mandir hall, the gifts these disciple had prepared for the parayan, before being led to the Sabha Mandap by Shree Muktajeevan Pipe Band and the disciples to conclude the Parayan Vidhi (rituals).

After being seated on his Gadi in the mandap, Acharya Swamishree received guests, followed by the official launch of a series of e-books including the Gujarati Mukti Sanjivani, lovingly prepared by sants and disciple of the sansthan.

The kirtan 'Anand Bhariyo' was released during the mahotsav.

Additionally, the actor Saurabh Rajyaguru received a special award from Acharya Swamishree in recognition of his hard work on the night programmes and on behalf of all the organisers and teachers who contributed towards the amazing music, dance and acting entertainment that was provided for all over the last three nights.

Following this, Acharya Swamishree blessed the congregation with his divine ashirwad in which he stated: