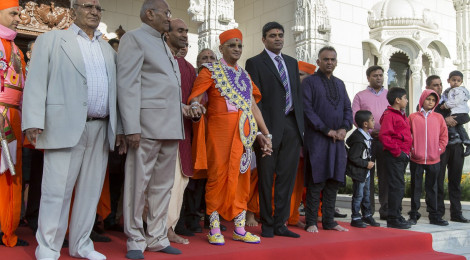 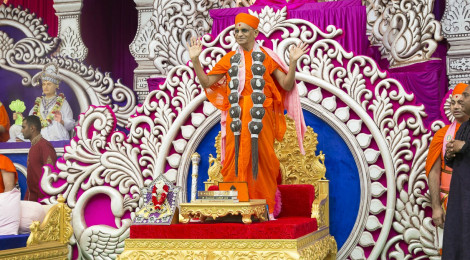 Thursday 21st August 2014, saw the second day of the Shree Swaminarayan Mandir Kingsbury Grand Opening Festival. Acharya Swamishree Maharaj began the days festivities with darshan of Lord Swaminarayanbapa Swamibapa in the magnificent golden sinhasan and gave darshan to the disciples on whose behalf the parayan were being held. Acharya Swamishree was seated in an ornate golden chariot which the disciples pulled along Townsend Lane to the Sabha Mandap, led by Shree Muktajeevan Pipe Band. The chariot was followed by disciples bearing murti and wonderfully decorated gifts on behalf of the parayan.

Following the performance of the parayan vidhi (rituals) and a salute by Shree Muktajeevan Swamibapa, Acharya Swamishree received eminent guest from the immunity, these included, Lesley Harrison and Sorsha Roberts from the Alkaptonuria (AKU) Society were also warmly welcomed by the trustees of the temple, and received a generous donation to their charity on behalf of Acharya Swamishree from Shree Swaminarayan Gadi Santhan.

Thereafter Acharya Swamishree blessed everyone with his divine ashirwad in which he explained: