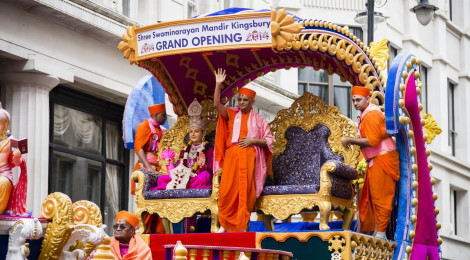 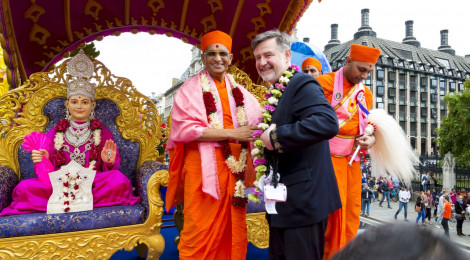 On Sunday the 17th August 2014, in celebration of the Shree Swaminarayan Mandir Kingsbury Grand Opening, a magnificent Nagaryatra (procession) was held through the streets of Central London. Formed of spectacular chariots, thunderous dhol drums, beautifully costumed dancers, carnival performers, marching cadets and melodious bagpipers from four continents, a parade of passion, strength and unity started at Jermyn street and made its way along Pall Mall, around Trafalgar Square, past Horse Guards Parade and through to Parliament Square. The long parade of performers of all ages, entertained the crowds along the route with sets fusing the cultures of the west and east, in a cacophony of sounds and action. Lord SwaminarayanBapa Swamibapa and Acharya Swamishree Maharaj, gave darshan to disciples and observers on the route, while seated upon ornately decorated chariots, designed and made by the disciples and sants of Kingsbury temple.

After over two hours of festivities the parade reached Parliament Square, where MP Barry Gardiner was waiting to greet Acharya Swamishree Maharaj. Acharya Swamishree bestowed blessings upon him and the UK parliament and urged them to continue the good works they do for the community and society.

During the parade Lord SwaminarayanBapa Swamibapa had granted ideal weather conditions; and shortly after the it was complete the sky over Parliament Square opened to refresh all the participants and complete the festivities.