The manifestation of such great saints is purely for the salvation of souls. Unlike ordinary beings, they manifest and depart according to their will, but not through the ideology of karma.

Some may be disillusioned by the departure of Jeevanpran Swamibapa, but His true disciples will see this as just another phase in His divine leela.

A recollection of Jeevanpran Swamibapa’s final day, written by one of Swamibapa’s beloved sants who accompanied Him on that day, is given below. This article was first published in the organisation’s monthly publication, Shree Ghanshyam Vijay.

On Samvat 2035 Bhadarva Sud 7 (Thursday 20th August 1979) Swamibapa awoke as usual at 2.00 am and performed His daily rituals of meditation, chanting and scripture recitals. Swamibapa bathed and performed His pooja. Jeevanpran Swamibapa, Acharya Swamishree and the sants then went to the Mandir for darshan and aarti, before departing to visit the Lake District. At 10 O’clock, they arrived at Lake Windermere. Hundreds of disciples had also gathered from various different places from around the country. The visit began with a tour of the huge lake on a cruiser boat. Jeevanpran Swamibapa and our beloved Acharya Swamishree were sitting on the same seat, and Swamibapa was chanting with a mara. 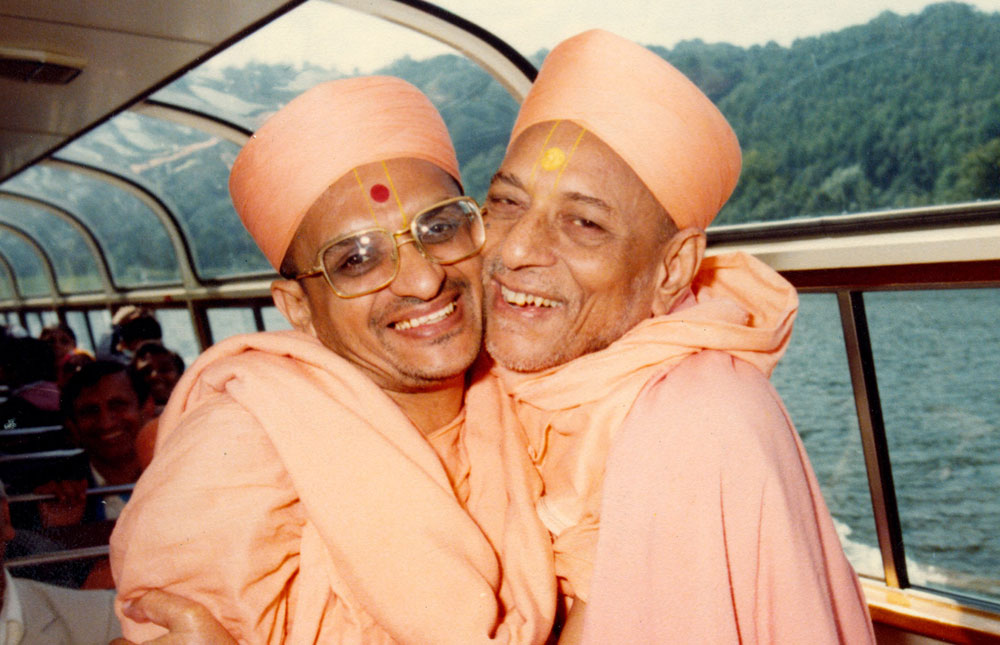 All of a sudden, Jeevanpran Swamibapa stood up, grabbed Acharya Swamishree and they lovingly embraced. We cannot even imagine the great love that this Guru and Shishya must have had for one another. This embrace was captured by the photograph we all know as the “bhet naa murti”. And because of this photograph, we are still able to have the divine darshan of this loving leela. Throughout the boat ride and the rest of the day, there was a constant dialogue between Jeevanpran Swamibapa and Acharya Swamishree. No one knows what they were saying to each other. No one could understand them. It was as if they were speaking in a divine language.
After the boat ride, everyone congregated on a hill by the side of Lake Windermere and a sabha was held. Jeevanpran Swamibapa showered His divine blessings. It was a beautiful warm and sunny day. Jeevanpran Swamibapa pointed to the sky and said, “Look at the clouds in the sky. It is covered with what looks like lines that have been drawn over it. These are not clouds. These are the marks of all the deities and incarnations seated on their divine aircraft, who have come for the darshan of this sabha.” The deities must have known that this was the last day they would have the darshan of Jeevanpran Swamibapa on this earth, and so they had come in their abundance. Photographs of this sabha clearly show these streaks in the sky, the marks that these deities had left behind.

Jeevanpran Swamibapa was pointing out the parallels, and indicating that He would soon be performing His antardhan leela. However, at the time, no one could understand these divine words. It is only now, when we recall these words, that we can understand them and see that Jeevanpran Swamibapa was telling us what He was about to do, as well as indicating the greatness of His beloved Shishya, Acharya Swamishree.

"Have too jamaade to mane jamvoo chhe" These were the last words that Swamibapa spoke before His antardhan. They were said to Acharya Swamishree. Whenever Swamishree recalls these words, He still becomes emotional. At that time, Acharya Swamishree offered a plate of melon to Swamibapa. But Swamibapa said, "Have too jamaade to mane jamvoo chhe." (From now, I only want to eat if you feed Me.) This was the last food that Swamibapa ate, and He eat this, according to His wish, at the hands of Swamishree.

But what was Swamibapa also saying. Jeevanpran Swamibapa was also saying to Swamishree, "From now on, I will eat now through You (Swamishree)."

Let us all pray to Lord Swaminarayanbapa Swamibapa and Acharya Swamishree that we never fail the tests that we encounter throughout our lifetimes, so that we will never become removed from this divine sabha. Let us pray that we maintain total faith in the words and actions of our beloved Acharya Swamishree and abide by His every wish. Only then will we be able to consider ourselves the true children of Lord Swaminarayanbapa Swamibapa.