"It is the duty of a son to fulfil his parents' wishes; it is a disciple's duty to continue his Guru's mission." Acharya Shree Purushottampriyadasji Swamishree Maharaj

What is the Shree Muktajeevan Swamibapa Smruti Mandir?

When was the Smruti Mandir built?

Under Acharya Swamishree Maharaj's inspiration, construction of the Mandir began in 1980 CE with the auspicious ground-breaking and foundation-laying ceremonies performed by Swamishree Himself. Its opening was performed on September 15, 1991 CE in the presence of the Vice President of India, Honourable Shree Sankardayal Sharmaji, and attended by India's leading ascetics and scholars.

Acharya Swamishree Maharaj at Smruti Mandir during its construction

Smruti Mandir is the sweet fruit of Acharya Swamishree Maharaj's eleven years of tireless endeavours. He kept close to its development as is construction progressed. Acharya Swamishree Maharaj personally carried bricks and mortar during the building of the Mandir. He was adamant that it must be a great and magnificent monument. He personally guided the architects, artists and craftsmen. He ensured that everyone involved in its creation remained comfortable and happy. He contributed to the most technical of details with the engineers. The smallest details did not escape His attentions. Every moment of His involvement was for Him, just another aspect of His devotion to His Guru. Acharya Swamishree Maharaj's vision became a reality with the completion of Smruti Mandir in 1991.

Today, Smruti Mandir is renowned as one of the foremost sites of pilgrimage. Sages, ascetics, leaders of different faiths, politicians, sportsmen, artists, scientists, professionals, businessmen, philosophers, students and people from all statures of society have visited the Mandir to experience its divine serenity.

What does the Smruti Mandir represent?

The world recognises the Taj Mahal as being a monument to unsurpassed worldly love. Within Smruti Mandir, however, it is the divine, spiritual love between a Guru and His disciple that is inherent for the world to experience. In terms of architecture and design, the Smruti Mandir is unique within India. However, the sublime message of devotional love between Disciple and Guru that Smruti Mandir represents is unique throughout the world. The magnificent marble tribute personifies Swamishree's profound devotional love (Guru-bhakti) for His spiritual teacher, Swamibapa. Acharya Swamishree Maharaj considers all His many achievements to have been performed, not by Him, but by His Guru, and He dedicates everything that He does at the lotus feet of His Guru. Acharya Swamishree Maharaj built this Mandir as the ultimate homage to Swamibapa's remarkable achievements. 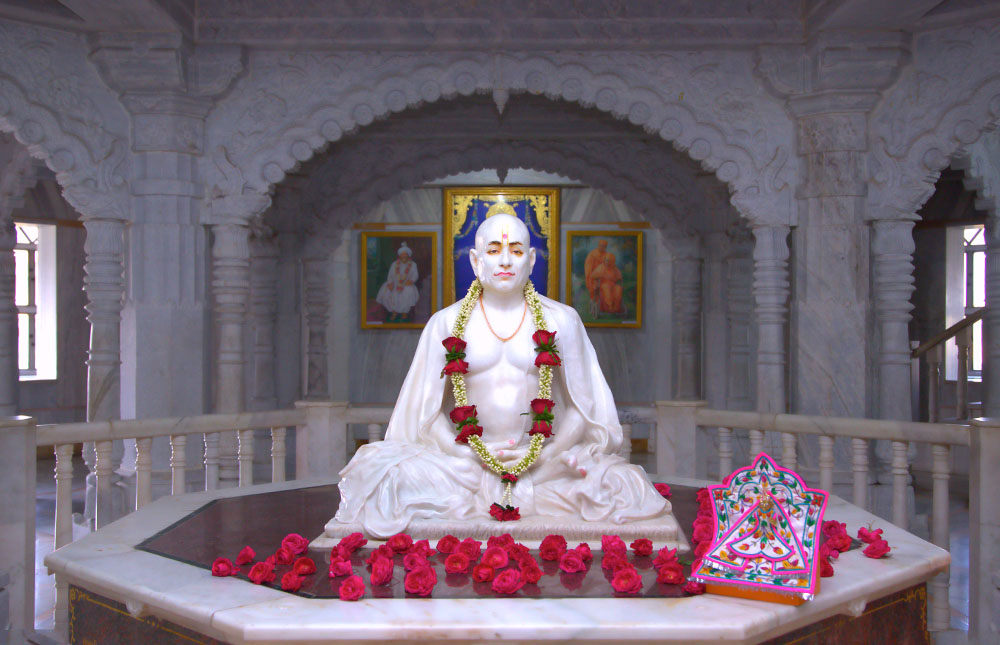 Acharya Swamishree Maharaj explains, "Smruti Mandir is a physical embodiment of our spiritual love towards Gurudev Jeevanpran Swamibapa. The labour and passion of many thousands of people, both Hindus and Muslims, have gone into its creation – they all worked hand in hand to create this remarkable memorial to Jeevanpran Swamibapa's service to humanity."

In terms of architecture and design, the Smruti Mandir is unique within India, but it is the sublime message of devotional love between a disciple and Guru that is matchless throughout the entire world.

Why is the Smruti Mandir also called "World Peace Centre?"

On one occasion, Gujarat's leading scholar and highly revered philosopher, Honourable Shree Keshavram Kashiram Shastri, visited the Mandir. Seeing the Mandir's unique architecture, intricate carvings, and the magnificent Murtis installed within it, and experiencing its divine serenity, he gave it the accolade, 'World Peace Centre'. The spiritual desires and prayers of thousands have been fulfilled by performing pilgrimages to the Mandir. Countless visitors describe the remarkable tranquillity and mental peace that they experience at the Mandir. As such, the Smruti Mandir is hailed as a symbol of "world peace." Whilst still on this Earth, the divinity of the Lord's divine abode, Akshardham, can be felt here.

What will one see at the Smruti Mandir?

The grounds are filled with mature trees, flowers and vegetation, and colourful displays and musical fountains. The Mandir itself strikes you like nothing else - The octagonal temple spans an area of 36,000 square metres, and is clad with 57,000 cubic feet of intricately carved, pure and flawless Makrana white marble. The Mandir has four grand stairways with four stunning archways that lead to the first floor, where the main shrine of the temple is situated. The 101-feet high spires on the Mandir are capped with golden, symbolic urns, which augment the beauty and grandeur of the Smruti Mandir.

As one enters from the Northern side of the Mandir complex, there is a grand, canopied monument (chhatri) on which the lotus feet of the Lord are installed. Beneath this is a deep well, into which the sacred prayers and chants of disciples are offered. At the entrance of the Mandir, there are large statues of elephants on both sides; elephants are symbols of prosperity and wealth. Moving forwards, one passes the deities, Hanuman and Ganpati on the left and right respectively. Ahead is a magnificent Murti of Acharya Swamishree Maharaj, the inspirational force behind the creation of Smruti Mandir. In His hand, close to His heart, He carries a small Murti of His Guru. At the centre of the ground floor presides a Murti of Jeevanpran Swamibapa sitting in meditation. This is the very location of Swamibapa's cremation ceremony. The darshan of Swamibapa in this calm, soothing, meditative posture teaches everyone about the importance of meditation in order to achieve the ultimate attainment, the Murti of God. As you ascend to the first floor, you see the magnificent shrine of Lord Shree Swaminarayan and His lineage of spiritual successors. At the centre, Lord Shree Swaminarayan presides on a throne with a scripture in His hand – symbolising Him explaining His eternal philosophy to all. To His right stands Jeevanpran Shree Abji Bapashree; to His left Sadguru Shree Gopalanand Swamibapa, then Sadguru Shree Nirgundasji Swamibapa. To Bapashree's right stands Sadguru Shree Ishwarcharandasji Swamibapa. Before them all, the Murti of Jeevanpran Shree Muktajeevan Swamibapa presides on Shree Swaminarayan Gadi. The Murtis (divine idols) that are installed in Shree Muktajeevan Swamibapa Smruti Mandir were made in the city of Jaipur, in Rajasthan. Jaipur is a world renowned centre for marble craftsmanship. The darshan of this divine assembly amazes everyone; their enchantment is incomparable. In the perimeter of each floor are oil paintings depicting the history of the Swaminarayan Faith.

Shree Muktajeevan Swamibapa gave darshan on this Earth for 72 years; as such, the Smruti Mandir has 72 columns, 72 steps, and 72 oil paintings.

In the innermost sanctum of the Mandir, there is a flame that remains lit continuously. Fresh, fragrant ghee is offered to this eternal flame.

"The Smruti Mandir symbolises purity, true devotion and dedication. Just as the flame removes darkness, you must ensure that you light a flame of devotion within you, so that the darkness of ignorance within your mind is eradicated and instead, the radiance of true love, devotion and spirituality pervades from you to all."

What is the Smruti Mandir Rajat Mahotsav?

This magnificent festival, which will be held from 24 to 30 September 2016, will celebrate with great splendour and fervour the 25th anniversary of the grand opening of Smruti Mandir. Thousands of disciples from all over the world will make the pilgrimage to experience the spiritual ecstasy of this festival. The five days will be filled with spectacular musical and dance performances, grand processions, scripture recitals, divine blessings from Acharya Swamishree Maharaj, and inspiring displays of devotion – in all, a truly unmissable experience.

"The Smruti Mandir is a monument to eternal peace. People who are pained with the modern day plagues of stress and anxiety come here from all over the world to experience tranquillity and serenity. May they all attain the Lord's divine blessings." Acharya Shree Purushottampriyadasji Swamishree Maharaj