Acharya Swamiji Maharaj descends from a small village called Trent, in the Mandal district of Gujarat. Jeevanpran Shree Abji Bapashree had visited the region on a few occasions with Sadguru Shree Ishwarcharandasji Swamibapa, and consequently, there were several families who strictly followed the Faith here. A highly pious and devout lady called Sankya-yogi Ba Shree Chanchalba lived there with her disciple Sankya-yogi Ba Shree Baluba. Sankya-yogi Ba Shree Chanchalba had a deep understanding of Jeevanpran Shree Abji Bapashree's divine glory. She knew that Jeevanpran Shree Muktajeevan Swamibapa was the true spiritual heir of Jeevanpran Bapashree and remained loyal to Him throughout her lifetime. Accepting the prayers of both pious women, Gurudev Swamibapa visited Trent in 1968 for the first time, and then established a small Mandir in Trent for the ladies of the village in 1971. Ten years later, in 1981, Acharya Swamishree Maharaj established a new temple for men and installed the divine Murtis of Lord Shree Swaminarayanbapa Swamibapa.

With Chanchalba's and then Baluba’s encouragement, and financial support, they sent bright, young students of the village to Maninagar, so that they could continue their education from there, and also, realise the greatness of Gurudev Swamibapa. One of the students sent by Chanchalba and Baluba to the Maninagar Boarding School was Acharya Swamiji Maharaj.

He manifested on Wednesday 7 April 1954 (Samvat 2010 Chaitra Sud 5), at the home of father Hemrajbhai Naghjibhai Patel and mother Champaben. He was given the name, Vrajlal.

Having received primary education in the village, He came to live in the Shree Ishwar-sad-vidyashram boarding on the grounds of Shree Swaminarayan Mandir, Maninagar, where He continued His education. He was a very bright and dedicated student, with an intense interest in theology and Sanskrit. Having received encouragement from Gurudev Shree Muktajeevan Swamibapa, He decided to accept initiation into the Sant fraternity. Gurudev Shree Muktajeevan Swamibapa performed the initiation ceremony on 1 September 1971, Samvat 2027 Bhadarva Sud 11, and gave Him the name, Sant Shiromani Shree Jitendriyapriyadasji Swami. 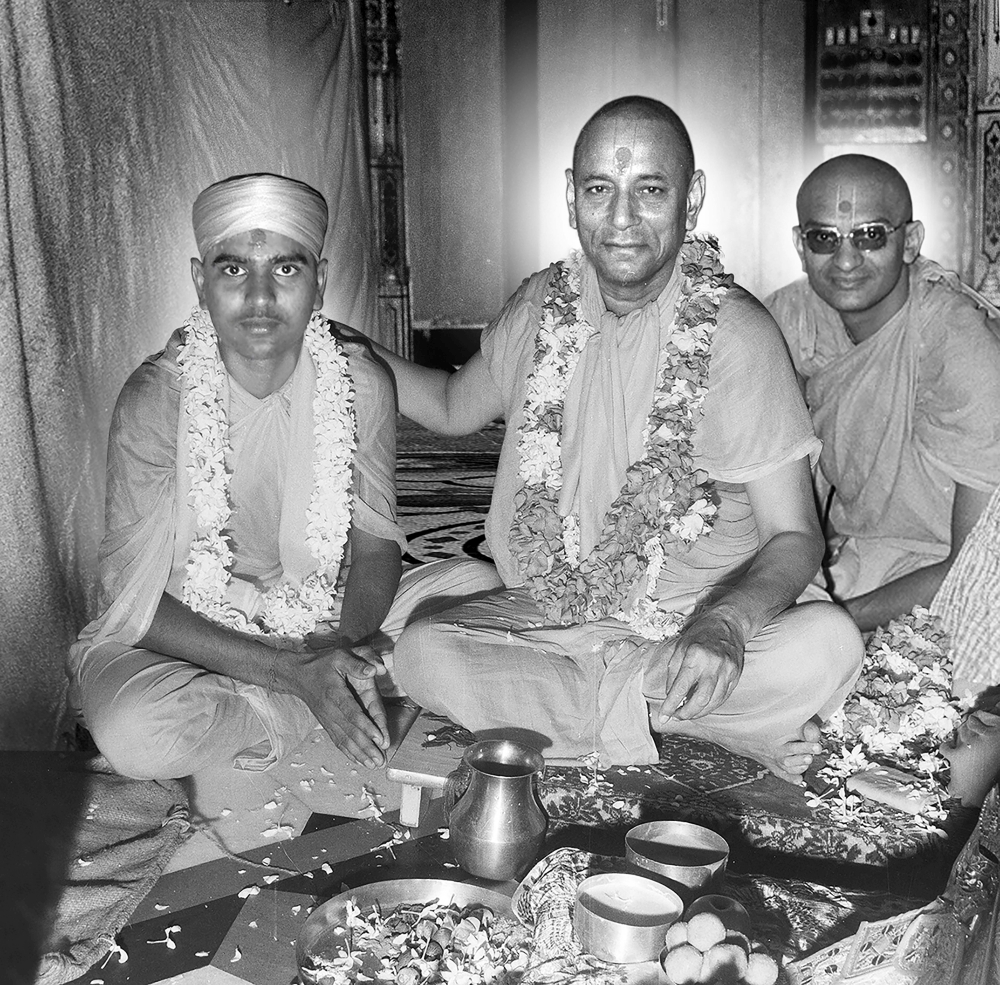 For eight years, He served the Faith and Gurudev Swamibapa, and at the same time, He continued learning Sanskrit and developing deep understanding of philosophy from the learned scholars of Gujarat. From 1979, He continued progressing His education with the encouragement of Acharya Shree Purushottampriyadasji Swamishree Maharaj and obtained the ‘Shashtri’ (scholar) accolade. In 2004, Acharya Swamishree Maharaj commended Him with the ‘Gadi-takiya’ status, the Sadguru status, and He was also made a Trustee of the official Trust, Maninagar Shree Swaminarayan Gadi Sansthan.

Acharya Swamiji Maharaj is a highly proficient scholar, narrator and orator yet He depicts humility, simplicity and service to God. He has a deep interest in promoting education and learning, and developing students to be devout, disciplined, moral and loyal subjects of Shree Swaminarayan Gadi. Through the direction of Acharya Shree Purushottampriyadasji Swamishree Maharaj, He travelled extensively across the globe for nothing but to preach the values of the Faith and bring one closer to God.