The Eminence of Gurudev Jeevanpran Swamibapa

These are examples of just some of the commendations given to our Gurudev Jeevanpran Swamibapa by India's prominent officials. Whosoever was fortunate to meet Swamibapa became enchanted and attracted towards Him and His teachings. 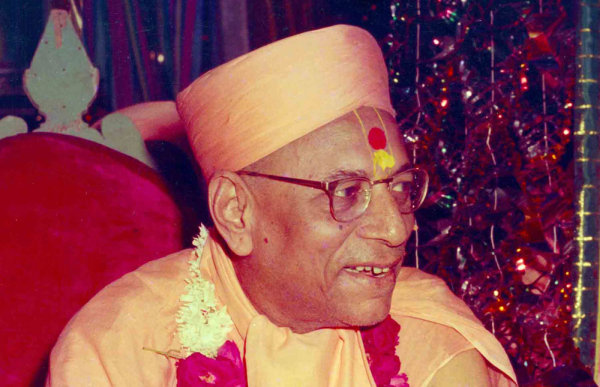 "Swamiji is a saviour to all mankind. His divine blessings and teachings will restore true morality within us all. Swamiji is a real Saint." Former President of India Dr Rajendraprasad at the All India Sadhu Samaj Convention - the congress of India's foremost spiritual leaders, 1957

"Swamiji is a truly revolutionary Saint who has a God-given talent for encouraging education and social welfare for all." Former President of India Dr Radhakrishan at the opening of the
Swaminarayan Arts and Science Colleges in 1961

These are examples of just some of the commendations given to our Gurudev Jeevanpran Swamibapa by India's prominent officials. Whosoever was fortunate to meet Swamibapa became enchanted and attracted towards Him and His teachings.

The masses referred to Him as "Jeevanpran", their life and soul. Merely through this name, it can be sensed just how much of a spiritually beneficial impact Jeevanpran Swamibapa has had upon the lives of us all, on the lives of millions of mumuksho, souls who are genuinely seeking spiritual salvation. 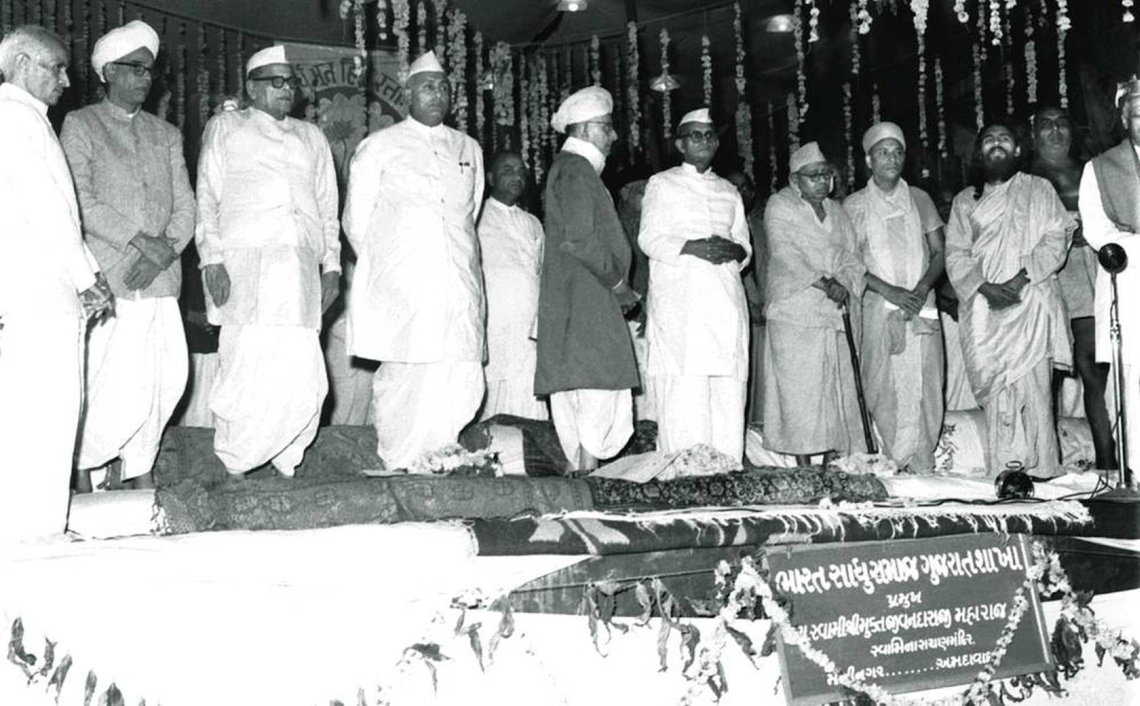 Jeevanpran Swamibapa was bestowed with many dignitary titles and honours by various leading scholars and other eminent persons.

Each title eulogises a different aspect of Jeevanpran Swamibapa's grandeur.

The magnitude of Jeevanpran Swamibapa's true greatness and divinity cannot be encapsulated by mere worldly words. However, words are all that we mortals have. By reminiscing about these names, we are able to attain a glimpse of the divinity of our beloved Gurudev and attempt to comprehend His greatness.

Thus, Jeevanpran Swamibapa was acclaimed as Dharmapran; the soul of religion; the essence of dharma; the centre of morality.

Lord Swaminarayan defines dharma as the law of virtuous conduct as recognised and supported by the Shruti and Smruti. Shruti refers to the knowledge imparted directly from the supreme Lord Swaminarayan. The Smruti refer to those teachings given by the highly respected, selfless and sacred saints who disseminate the supremacy of the Lord throughout society.

These essentials of dharma are eternal. They existed before the formation of the earth and will remain even after its destruction. This dharma describes the essential philosophy of the ideal human life and is the common doctrine of all faiths and all strata of society. The tenets of this dharma are clearly stated by Lord Swaminarayan in the Shikshapatri.

Jeevanpran Swamibapa was the supreme authority of this eternal dharma; thus He was named Sanatandharmasamrat.

Chuda means the highest or foremost point. A person's chuda is his chotli. A Mandir's chuda is its shikhar. Mani means diamond. When the two words are combined, chudamani refers to the glistening diamond that is mounted into a crown, moogat.

The leading Indian philosopher Shankaracharya defined chudamani for humans as being their own vivek, their decency, righteousness and civility. Each person may have their own slightly differing interpretation of what is right and decent, i.e. what they define as vivek, and live their lives according to these principles. However, to ensure that we remain adherent to the true vivek, Jeevanpran Swamibapa came down onto this earth so that we can all follow His prime examples and instructions.

Lord Swaminarayan’s spiritual philosophy is that of Vishishtadvait. This philosophy perfectly describes the supremacy of Lord Swaminarayan, the status of Anadi Mukta and the concept of Rasbas. This is the true interpretation of the philosophy that was first proposed by Shree Ramanujacharya in the 14th century AD and subsequently elaborated upon by Lord Swaminarayan. These ultimate ideas were explained by Jeevanpran Shree Abji Bapashree in the Rahasyarthpradipika Tika Vachnamrut and the Bapashree Vato scriptures.

If it was not for Gurudev Jeevanpran Swamibapa, this philosophy would have been lost forever. The true interpretation of the Vishishtadvait philosophy as Lord Swaminarayan had intended would have become completely erased. Jeevanpran Swamibapa created Shree Swaminarayan Gadi Sansthan, the glorious haven of spirituality where the ultimate status of Anadi Mukta can be achieved.

In slok 204 of the Shikshapatri, the supreme Lord Swaminarayan says, “I have distilled the essence of all the true scripture and compiled this book of rules. This code of conduct is the ultimate of all scriptures to attain the desired fruits for all.”

In the ancient Ved scriptures and the other subsequently written religious texts, guides to how to live lives of morality and religiosity have been clearly stated. Protecting the values stated in these scriptures refers to upholding these values. As a result of His exemplary speeches and discourses given across the entire globe, through His religious writings, and ultimately by the examples that He demonstrated, Jeevanpran Swamibapa was a primary factor in upholding, defending and spreading the principles and values of the Ved and the other true scriptures.

In Indian mythology, the leading sovereign of all the kings was called the Chakravati King, or Rajrajeshwar. Similarly, in the realm of spirituality, to denote Him as the greatest of all, Jeevanpran Swamibapa was declared Mahamandaleshwar.

The word bhaskar is derived from the Sanskrit word bhaa, meaning light, and lustre. Thus whoever, or whatever, emits light, or is the source of light is called bhaskar. The word bhanu is also derived from the word bhaa. In this context, bhaa actually means kanti, splendour and beauty. Thus the term is indicative of divinity.

India has always been associated with the divine, and has therefore been named Bhaa (divine) into which it is Rat (enjoined into), i.e. the country where divinity is associated into it, in all respects. This is how India's original name Bharat was conceived. Instilled into Bharat are the religious philosophies of truth, non-violence, compassion, benevolence, amity, etc.

Jeevanpran Swamibapa had so much enthusiasm and eagerness to spread the ideal qualities of Bharat to all, that He completely disregarded His own wellbeing. He suffered much hardship. Rarely did He have the comfort of any kind of facilities. Just as the supreme Lord Swaminarayan ensures that the sun in the sky radiates upon us all, Jeevanpran Swamibapa shone, like a beacon of divinity and spirituality; the ideals of Bharat.
That is why Jeevanpran Swamibapa was named Bharatbhaskar.

Jeevanpran Swamibapa; the Epitome of Humility

We are truly fortunate at Shree Swaminarayan Gadi that the very same spirituality and magnificence of Gurudev Jeevanpran Swamibapa is alive and thriving and can still be experienced through our beloved Acharya Swamishree, through whom Swamibapa is giving darshan today upon this earth. Let us pray to Lord Swaminarayanbapa Swamibapa and His Holiness Acharya Swamishree that we forever remain worthy of this ultimate fortune and remain at the shelter of Shree Swaminarayan Gadi.