In the Vikram year 1837, Chaitra Sud 9th, (based on the Vikram Lunar calendar), 2nd April 1781 A.D., Lord Swaminarayan manifested in Chhapaiya, a town in the holy land of Northern India, to dispel evil and superstitious practices, to preach non-violence and universal brotherhood, methods of self realisation and ultimately to purify the lost souls and reveal to them His supreme abode Akshardham.

The ancient Hindu scripture, the Brahmand-Puran, has forecasted:

In the Holy Scripture, the Padma-Puran, it is said:

“When dishonesty has spread throughout society and the world has become immersed in a mire of sin, Lord Shree Swaminarayan will manifest in order to liberate all."

"When the principles of the elite religion are being destroyed, Lord Swaminarayan will manifest at the home of the Brahmin Hariprasad. By the mere utterance of His name, sinners will be purified."

In the Vishvaksen-Sanhita scripture, it is said:

"I will assume the name Sahajanand and will manifest upon this earth. I will ensure that souls attain My divine abode."

In the eleventh chapter of the Shreemad Bhagwat, it is written:

"The people of Sat-yug, Treta-yug and Dwapar-yug wish to be born in Kali-yug, because it is in this age that the supreme Lord Shree Swaminarayan and His Satpurush will manifest."

In the same scripture, it states:

"Both people of the low classes, such as Kirat, Hun, Andhra, Pulinda, Pushkas or Barewasi, Abhir or Ahir, Kank or Kathi, Muslim, Khoja, Koli, Tamboli etc. and people who are of the higher classes by birth, but who have performed vile deeds, will renounce their evil ways, purify themselves and become ardent devotees through their association with the ascetic and gruhasth disciples of Purna-Purushottam Lord Shree Swaminarayan who will manifest in the future. Therefore, it is needless to say that the higher caste Brahmins will also become purified. I bow down to this incarnator of all incarnations Lord Shree Swaminarayan, who will manifest in the future."

Fulfilling the forecasts of these scriptures, Purna-Purushottam Lord Shree Swaminarayan manifested to:

"The Lord is never born, although He may show that He is going through the process of human birth. He never ages and never dies. Such a powerful Lord manifested at the home of Murti (Bhakti) and Dharmadev. He shows His body and actions to be just like those of all others. Those who understand His deeds to be divine, and understand that He never ages and is immortal, will be released from the cycle of birth and death." Lord Shree Swaminarayan, Vachanamrut Ahmedabad 4 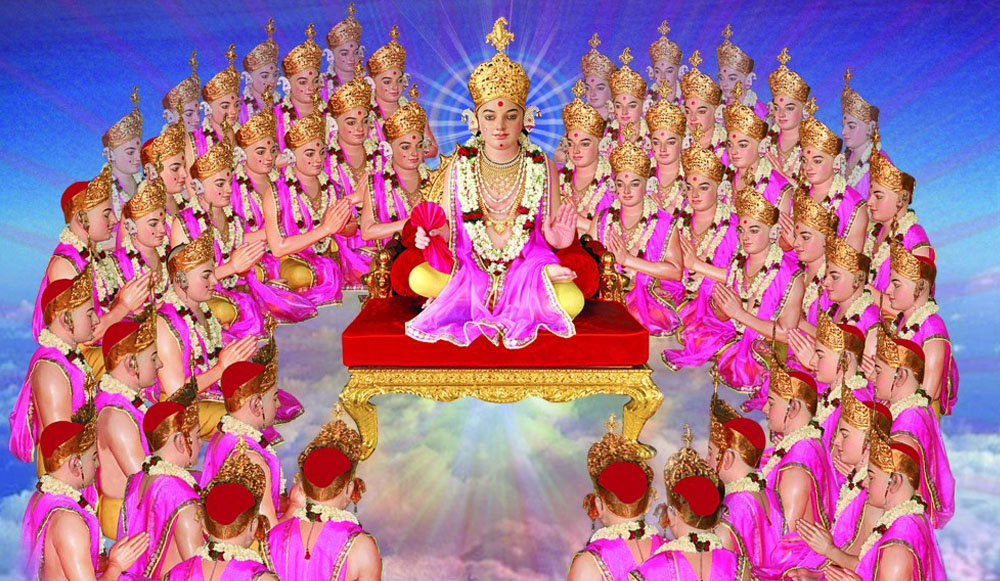 On one occasion, Lord Shree Swaminarayan was seated amongst a vast assembly of sants and devotees. He asked them all a question. "God incarnates on the earth for the salvation of souls. Is He unable to bestow salvation whilst remaining in His abode, without incarnating on this earth? God is able to confer salvation in whichever manner He wills. In that case, what is the purpose for God to assume a human form? If God can only bestow salvation after incarnating, but is otherwise unable to confer beatitude, this constitutes a deficiency in God. The fact is that God is able to grant salvation to souls, with or without incarnating on the earth. So what is the purpose for God to incarnate? That is the question."

"When the Lord appears on the earth in a human form, He possesses the same infinite spiritual powers that He has when He is in Akshardham. Only a foolish soul will think of Him to be a human, just like themselves. They believe that the Lord is born, then becomes a child, reaches adolescence, becomes old and eventually dies. However, these human features do not apply to the Lord. The murti of the Lord is divine. All His actions are also divine." Lord Shree Swaminarayan, Vachanamrut Panchala 7

All the senior and eminent sants answered the question in accordance to their understanding. However, Shreejimaharaj's remained unanswered because none of the answers were satisfactory. All the munis joined their hands and prayed, "Oh Maharaj! The answer to that question can only be attained from You." So Shreejimaharaj said, "The only purpose for God to assume an incarnation is that He surrenders Himself to the devotion of the devotees who have an intense love for Him. The Lord incarnates Himself and assumes a form in accordance to the devotee's spiritual desires in order to grant them His divine bliss. He then fulfils the spiritual desires of His devotees. As the devotees are corporeal and have human bodies, God also shows Himself in this manner in the world and assumes a human body. He showers affection upon His devotees. He conceals His greatness and takes the form of the devotee's son, companion, friend, or relative. Due to this relationship, devotees experience a close intimacy with God. A barrier between God and the devotee does not remain and God is able to grant His infinite bliss to the devotee according to their spiritual desires. Therefore, the purpose for God to assume an incarnation is to fulfil the spiritual desires of His loving devotees. Along with this, He bestows salvation to innumerable souls and establishes the religion (the decree of moral, righteous conduct). - Vachanamrut Kariyani 5 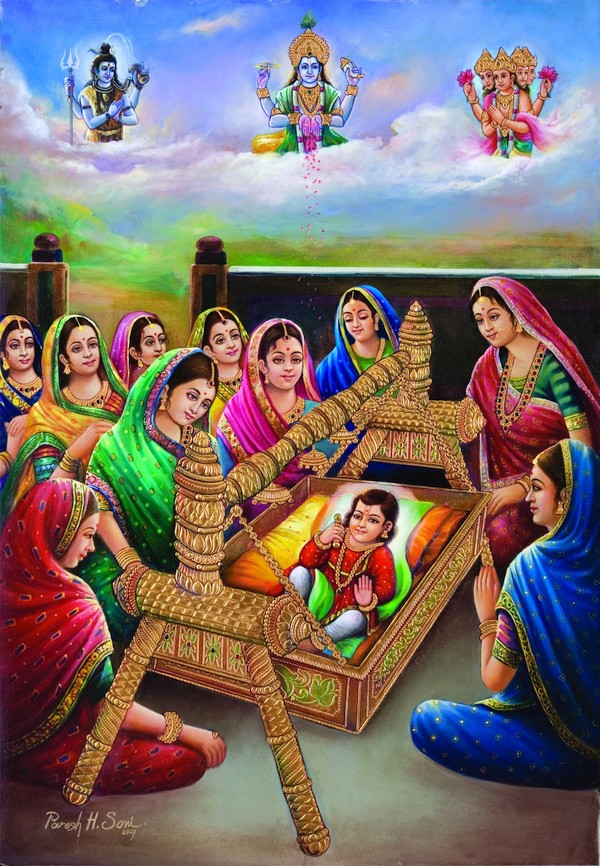 In the Vikram year 1837, Chaitra Sud 9th, (based on the Vikram Lunar calendar), 2nd April 1781 A.D., Lord Swaminarayan manifested in Chhapaiya, a town in the holy land of Northern India, to dispel evil and superstitious practices, to preach non-violence and universal brotherhood, methods of self realisation and ultimately to purify the lost souls and reveal to them His supreme abode Akshardham.

At the time of His manifestation the whole country was full of rivalries and dissension's of the petty kingdoms which ruled the land. Moral principles and values were non-existent. Impiety and evil prevailed all over the country and blind belief gained force. Mutual distrust and disbelief broke down the vigour and vitality of the people. Fraud and superstition had gained hold over the masses. Impostors in the garb of priests and monks began to exploit the religious sentiments of the people in order to gain wealth and prosperity for themselves. It was in this climate of anti-social and irreligious attitudes, that Lord Swaminarayan enduring many discomforts and self-suffering established the Swaminarayan faith expounding the universal love of all creatures.