On this, the third day of the Mahotsav, eminent devotees including Shree Jadavjibhai Varasani and Shree Laljibhai Sanghani expressed their thoughts and sentiments to please Lord SwaminarayanBapa Swamibapa and Acharya Swamishree.

His Divine Holiness Acharya Swamishree then showered His divine Ashirwad on the entire sabha:

“Throughout this Mahotsav, people from all over the world have been asking to be kept a part of this divine Mahotsav. Sants in Maninagar who were unable to attend have conveyed the same love-filled prayers. Lord SwaminarayanBapa Swamibapa has fulfilled all the prayers of all His children, and kept everyone within His Murti during this Mahotsav.

“Our beloved Gurudev, Jeevanpran Shree Muktajeevan Swamibapa has not come onto this Earth to take anything from us, His only intention is to give, to give us the shelter and glory of Lord SwaminaraynBapa Swamibapa's Murti.

“The Mahotsav that we are able to have the darshan of today is a result of the immense efforts of Shree Muktajeevan Swamibapa's Sants. The stage decoration, lighting, videography, photography, sound engineering, catering, accommodation, evening programmes and even the magnificent chariot that you will see this afternoon, are all products of these divine Sants' devotion. Swamibapa's Sants have only one aim, to please the Supreme Lord SwaminarayanBapa Swamibapa more each day. Their efforts are beyond description.

“Seeing the loving devotion of His Sants and devotees, Lord SwminarayanBapa Swamibapa is immensely pleased with everyone. His only instruction is that each of His children continues with this devotion until his final breath.”

The nagayatra started at 3pm on a very hot afternoon. After the initial aartis by devotees, Shree Muktajeevan Pipe Band saluted Lord SwaminarayanBapa Swamibapa and HDH Acharya Swamishree who were seated on a magnificient chariot built by the highly talented sants.

Thousands of devotees had gathered to be part of this procession. Many thousands of Delhi residents were given the opportunity to have the divine darshan of the supreme Lord Swaminarayan and Acharya Swamishree. 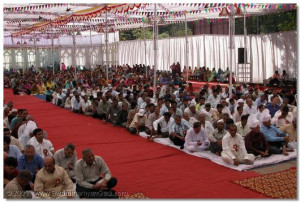 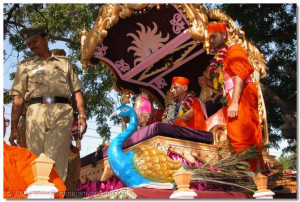 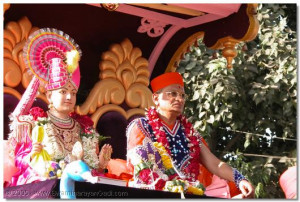 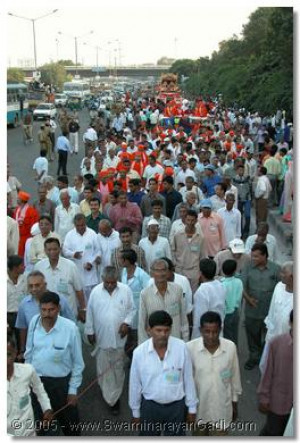 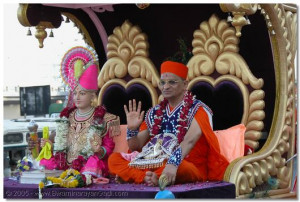 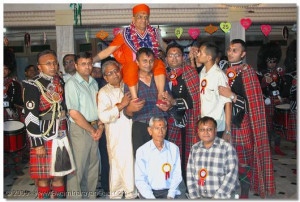