Celebrations continues on the 2nd day of the mahotsav

Acharya Swamishree then blessed those devotees that had travelled from the UK and USA to be at this Mahotsav; each received a prasanta paag, saal and flower garland. Acharya Swamishree also blessed members of Shree Muktajeevan Pipe Band in the same manner. Acharya Swamishree became pleased with the Band's contribution to the Mahotsav and invited them to the forthcoming Shashtipurti Mahotsav to be held at Maninagar in February.

His Divine Holiness Acharya Swamishree then showered His divine ashirwad on the sabha:

“Delhi Mandir is unique in the Swaminarayan Sampraday and indeed the entire Hindu religion. To this day, no-one else in history has installed their own murti in a sinhasan, except for the supreme Lord Swaminarayan and our beloved Gurudev Jeevanpran Shree Muktajeevan Swamibapa.

“At the time when Shree Muktajeevan Swamibapa came to Delhi to perform vastu pooja, the waters of the River Yamuna wished to have His Divine Darshan. The banks of the river burst, the water reached the Mandir compound and touched Swamibapa's divine lotus feet and then immediately retreated back to the river.

“The only reason why Shree Muktajeevan Swamibapa inspires Mahotsavs such as these, is to give us new memories of His divine leela, so that we are continuously able to recollect His murti.”

The Shree Swaminarayan Mahamantra dhoon was then sung before the sabha concluded for prashad thaar.

The afternoon sabha commenced with the continuing recital of the Rahasyarth Pradeepika Tika sah Vachnamrut. Acharya Swamishree then blessed those devotees that had travelled from around India to be at this Mahotsav; each received a prasanta paag, saal and flower garland.

Sant Shiromani Shree Divyavibhushan Swami, a resident sant of Delhi Mandir, then took a few moments to express his thoughts to the sabha:

“No one of our divine Guruparampara, or anyone else of the Swaminarayan Sampraday has been to Delhi before our beloved Gurudev Jeevanpran Shree Muktajeevan Swamibapa. The reason why the name of the Supreme Lord Swaminarayan is flourishing in this region is through the immense efforts of Shree Muktajeevan Swamibapa and the continuing endeavours of Param Pujya Acharya Swamishree.”

A young member of the sabha, only four years of age, Shree Kaushik Thakkar, then sang a kirtan (Sarva karan na chho karan) to please the Supreme Lord SwaminarayanBapa Swamibapa and Acharya Swamishree.

“Prior to our beloved Gurudev Shree Muktajeevan Swamibapa, no-one had installed such murtis of themselves. When He did so in Delhi mandir, the devotees of Bhuj asked ‘When will we be so fortunate as to witness You installing such divine murtis in Kutch ?' Swamibapa replied ‘ Kutch is very dear to me, soon you too will have these murti installed. But this will not be done by Me. My successor will perform this deed. True to this promise, such divine murtis of the Supreme Lord Swaminarayan – Shree Ghanshyam Maharaj, Jeevanpran Shree Abji Bapashree and Jeevanpran Shree Muktajeevan Swamibapa have been installed not only in Bhuj, but also as far as the UK , USA and Africa . This is the immense power of our Acharya Swamishree.”

The Sabha concluded for everyone to receive evening prashad thaar before tonight's devotional dance evening.

The second evening programme of the Rajat Pratishtha Mahotsav was a compilation of devotional dance performances by the immensely talented Sants of Shree Swaminarayan Gadi and disciples from around the world. The evening was organised through the tireless efforts of Shree Muktajeevan Swamibapa's Sants, with the sole aim of please Lord SwaminarayanBapa Swamibapa. Special thanks were given to Sant Shiromani Shree Munishwardasji Swami and Shree Sarvatmapriyadasji Swami who had spent night and day in preparing the evening's performances. The Master of Ceremonies for tonight's proceedings was Sant Shiromani Shree Vignanprakashdasji Swami.

The itinerary for the dance performances was:

The devotees of Varodra who partook in the evening's nrutya had travelled to Delhi especially to perform tonight. They were in the middle of taking various examinations and had to return the same night in order to sit examinations in the following days.

The highlight of this evening's performances was the impressive Gop Gunthan Raas, the rope dance. During this raas, the eight performing members each held a rope that were all attached to a dome hanging from the stage ceiling. As the dance progressed, the ropes became entangled in a intricate plat. But this was not the end of the spectacle. The second half of the raas involved untangling the complex knot pattern. As the raas concluded, the steps of the performers were such that the eight ropes became perfectly untangled. This truly was an amazing performance borne out of the immense practice, dedication and devotion of the performers.

Acharya Swamishree became so pleased at the evening's performances, He ran onto the stage to dance with is beloved Sants and devotees. Each participant, whether a performer, teacher or stage controller, was personally blessed by Acharya Swamishree after the event. 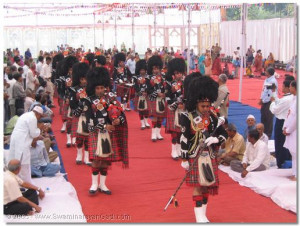 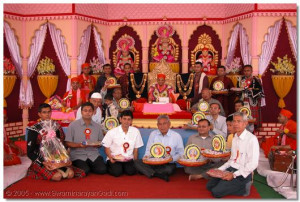 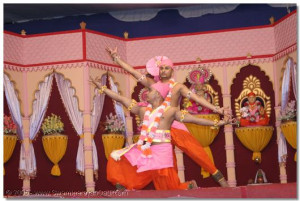 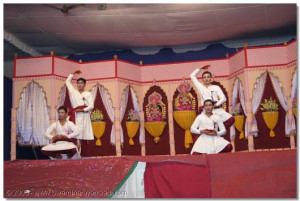 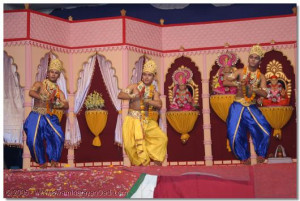 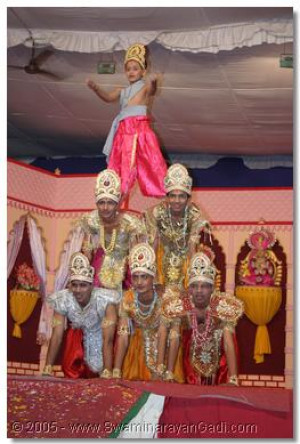