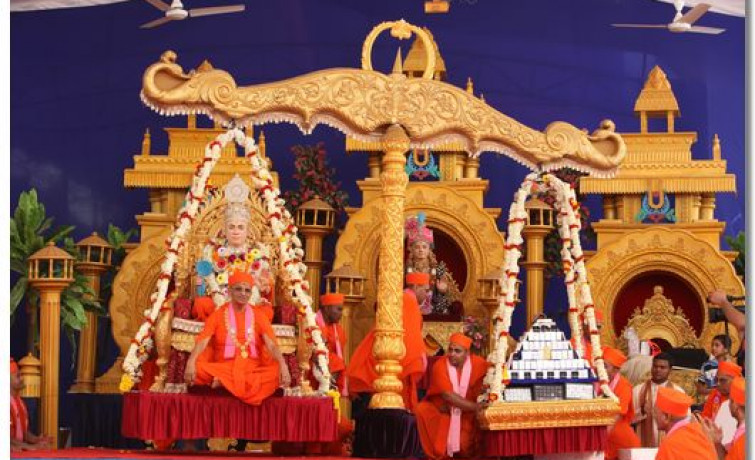 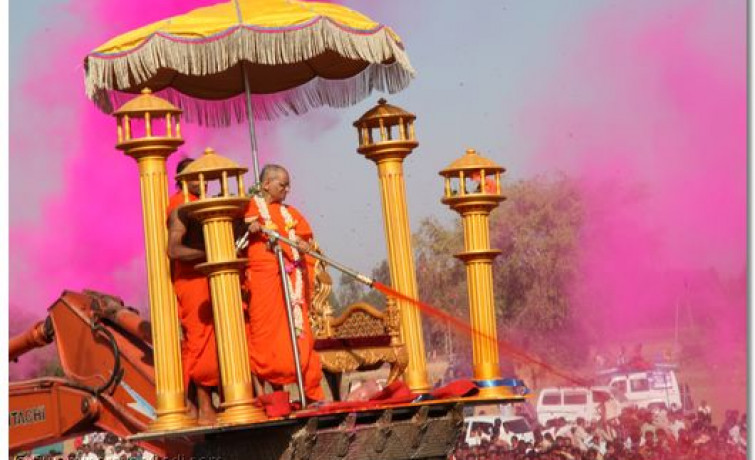 The final day of the festival, Friday 9 March 2012 had arrived. Sants and disciples had been working through the night to complete the final preparations of the climax of the grand festival to celebrate 60 years since Swamibapa first set foot on the soil of Panchmahal for the benefit of its people.

At 8.00 am, Jeevanpran Swamibapa and Acharya Swamishree presided on a golden chariot in the forecourt of the temple. Before them stood 110 young disciples carrying various different items for offering adoration to Jeevanpran Swamibapa; 60 due to the sixtieth anniversary of Swamibapa coming to Panchmahal, and 50 to mark the golden jubilee of Acharya Swamishree’s initiation as a sant. Shree Muktajeevan Pipe Band London led the parade to the front of the stage.

The ceremonial weighing of Jeevanpran Swamibapa was the most special event of the day. Swamibapa was seated on one side of a magnificent, golden scale. One by one, different articles were placed onto the other side of the scale. Jeevanpran Swamibapa was ceremonially weighed with fresh flowers, coconuts, candy sugar and betel nuts. The final weighing was with ‘Panch-ratna’, 5 precious articles. These included gold, silver, platinum, diamonds and rubies. Each time that the scales tipped from one side to the other, there were ecstatic cries of joy from the audience. Acharya Swamishree swung the scales all around so that everyone could see the divine darshan of Jeevanpran Swamibapa’s ‘tula’ ceremony. Acharya Swamishree performed the first aarti, after which the sants and disciples were given the opportunity to perform aarti.

After Jeevanpran Swamibapa’s divine blessings, Acharya Swamishree too bestowed His divine grace, in which He said:

After showering the congregation with His divine blessings, Acharya Swamishree gave mementos to disciples who had contributed most during the festival. Prasad was then distributed to everyone present.

As this was the day of Fuldolotsav, the festival of flowers, sants and disciples gathered in a nearby open field to celebrate this occasion. After bathing Shree Harikrishna Maharaj with the coloured water and powder, this consecrated paint was showered all over the sants and disciples by Acharya Swamishree. He presided high up on a raised platform, which had a hose spraying coloured water over everyone. It was a truly memorable and joyous occasion. The sentiments behind this is that the colour of the material world should be banished away and replaced with the colour of God, i.e. you must not allow yourself to be controlled by materialistic worldly objects and attachments but instead, you must remain engrossed with adhering to the will of the almighty Lord.

Shree Harikrishna Maharaj was also bathed with Panchamrut, the five nectars. This consecrated Panchamrut was also sprayed over disciples. 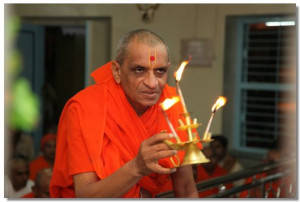 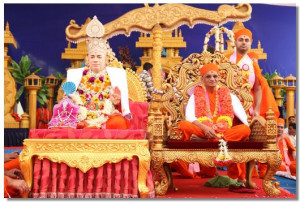 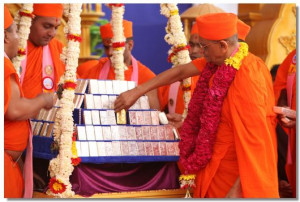 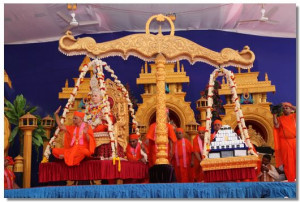 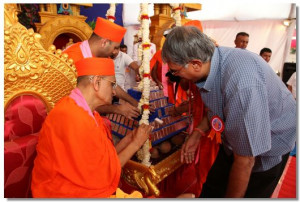 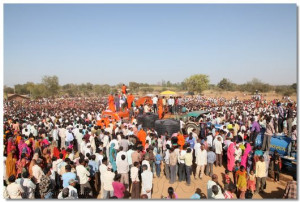