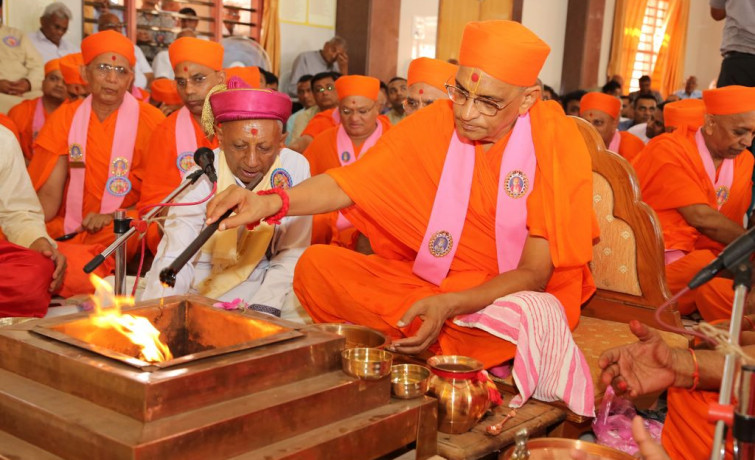 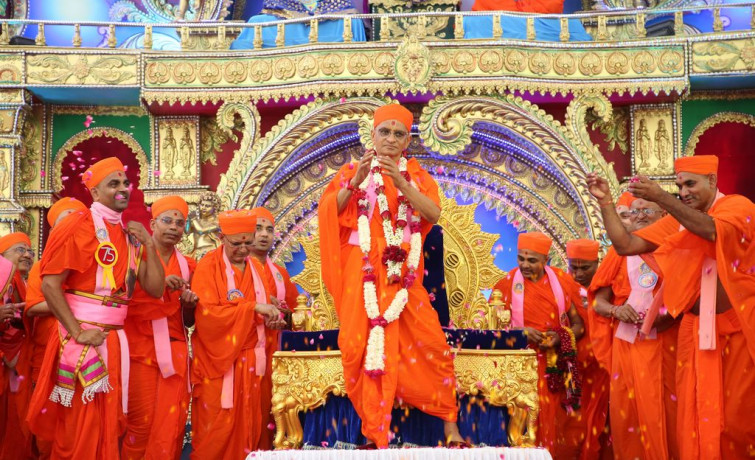 The final and most significant day of the 5 day Mahotsav. Acharya Swamishree Maharaj performed the patotsav ceremony of Lord Shree Swaminarayanbapa Swamibapa in the new sinhasan in the Ladies mandir. He performed the havan (fire) ceremony for the installation of the new marble Murtis in the Men's mandir

The final and most significant day of the Mahotsav had arrived. After performing mangla aarti, Acharya Swamishree Maharaj went to the Ladies Mandir to perform the patotsav ceremony of Lord Shree Swaminarayanbapa Swamibapa in the new sinhasan. Annakut thal was offered and ladies performed aarti. He then returned to the men’s Mandir where he performed the havan (fire) ceremony for the installation of the new marble Murtis. After the new Murti installation ceremony had concluded, annakut thal was offered and disciples who had contributed to the new Mandir construction performed aarti.

In Samvat 1962 Vaishakh Vad 1, Jeevanpran Bapashree said to Sadguru Shree Ishwarcharandasji Swamibapa, “You have been listening to my discourses for many years, but you have not written them down. If you did, they would be of immense use for disciples in the future.” So from that day, the words that Bapashree said during the discourses were written by Sadguru Shree Ishwarcharandasji Swamibapa. These were then published as Shree Abji Bapashree ni Vato Part 1 and Part 2. The 111th anniversary of Shree Abji Bapashree ni Vato’s commencement was observed at the start of today’s assembly. Acharya Swamishree Maharaj performed poojan to the manuscript of the Vato and performed aarti.

Acharya Swamishree Maharaj blessed the assembly, in which he said, “Gurudev Swamibapa prayed for the supreme Lord to come from Akshardham and preside within the Mandir. These Murtis are not marble Murtis, but they are the merciful Lord Himself. Swamibapa blessed everyone, that whoever performs darshan to these Murtis today will attain unsurpassed divine bliss. Swamibapa said that he can see all the Sants and disciples, not sitting here, but actually, they are all sitting in Akshardham.

“Having presided here in the new Mandir today, the Lord is becoming pleased with the devotion of all those who contributed to its creation and the Mahotsav held to celebrate its opening. His loving gaze and mercy is showering upon everyone.

“We have been blessed with a rare opportunity to experience the Lord’s Murti, regardless of whether we are worthy or not. Do not displease him and forsake that opportunity. Swamibapa explains, ‘the Faith is like a vast ocean of great riches. Lots of people remain on the surface of the ocean, on boats or ships. However, these people do not attain the treasures that remain in the ocean beds. Such treasures are collected by the deep sea divers, i.e. those who go deep into the water. Only these deep sea divers can find and collect the riches of the oceans, such as pearls.’ Similarly, if you wish to find the true value and worth of God, and experience His divine bliss, you will have to immerse yourself into the Faith. It cannot be shallow, because only limited benefit is attained by that.

“Oh Lord! May we be given such divine strength, wisdom and courage so that we can conduct our life according to Your will; may we remain Your humble children; and may we life forever at Shree Swaminarayan Gadi, i.e. at Your divine, lotus feet.”

After the divine blessings, the senior Sadguru Sants and disciples presented Acharya Swamishree Maharaj with a shield on which a prayer was inscribed, asking for his blessings, and taking note of his foremost contribution in the creation of the new Mandirs in Bharasar. A 50 foot long garland was also presented.

All the Sants who originated from Bharasar were blessed by Acharya Swamishree Maharaj, and photographs taken to remember this joyous occasion. 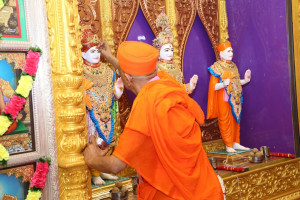 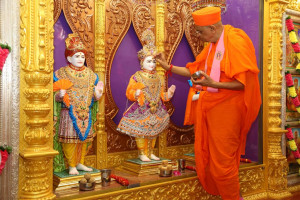 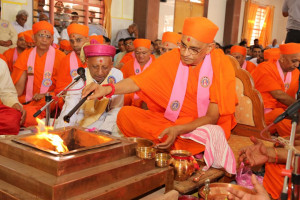 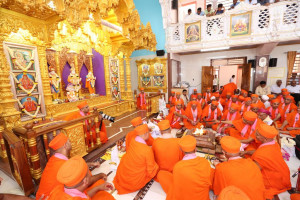 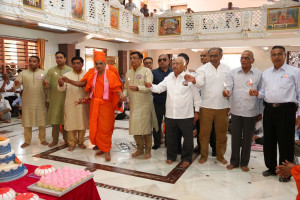 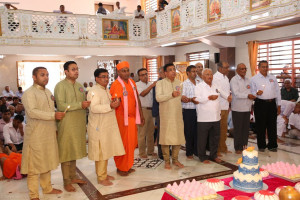