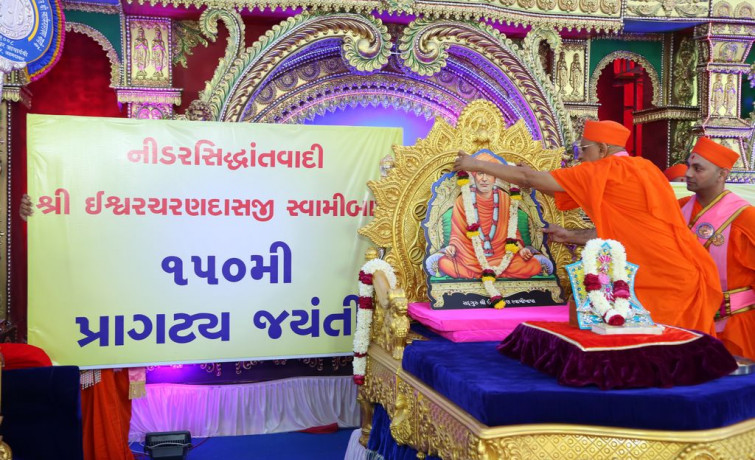 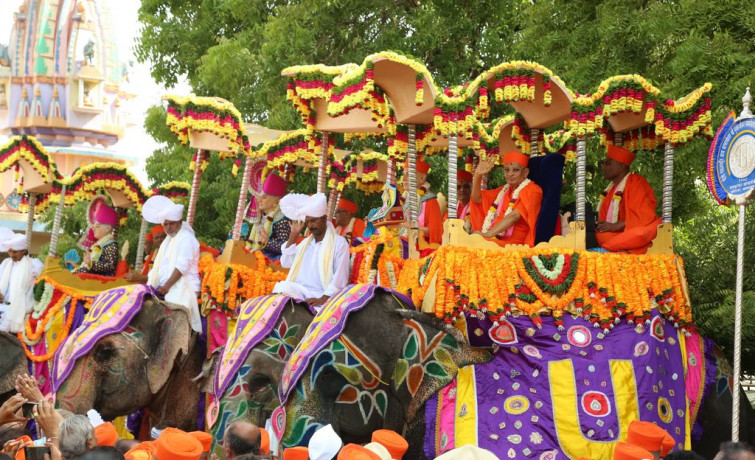 Acharya Swamishree Maharaj performed the mangla aarti of Lord Shree Swaminarayanbapa Swamibapa in the new Mandir. The main scripture recital of Pradeepika Tikopeta Shikshapatri continued in the assembly marque. A procession was held from the Mandir to the assembly marque, led by Shree Muktajeevan Swamibapa Pipe Band. Behind Acharya Swamishree Maharaj’s chariot, the women disciples of the families who had held scripture recitals carried offerings for the Lord.

In Samvat 1923 Vaishakh Vad 4, Sadguru Shree Ishwarcharandasji Swamibapa manifested in the village of Ashlali. This year, we celebrate his 150th year. This special anniversary is being celebrated as part of this festival. Acharya Swamishree Maharaj performed poojan to Sadguru Shree Ishwarcharandasji Swamibapa and performed aarti.

Acharya Swamishree Maharaj blessed the assembly, in which he prayed to supreme Lord Swaminarayanbapa Swamibapa, “Seeing all the devotion and dedicated hard work of the Sants and disciples; may You remain pleased with them all and bestow unsurpassed divine bliss to them all.”

“May we have the strength and wisdom to remain at the divine shelter of Shree Swaminarayan Gadi, continuing to understand and appreciate the greatness of our Lord and His divine lineage of spiritual leaders.”

At 4 pm, a grand procession was held from the main village square of Mankuva. Four regal elephants carried Lord Shree Swaminarayan, Jeevanpran Shree Abji Bapashree, Gurudev Shree Muktajeevan Swamibapa and Acharya Swamishree Maharaj. Other chariots carried the Lord and Sants through the parade. Numerous bands performed through the procession, including the mass bands of Shree Muktajeevan Swamibapa Pipe Band, from Maninagar, London, USA, Bolton and Kenya. The young cadets of the Bands also marched throughout the procession.

The procession proceeded along the road to Bharasar. On both sides of the road stood disciples and other villagers who were eager for the Lord’s darshan. Ladies carried ornamental urns on their head and sang devotional songs, whilst younger ladies danced to please the Lord. As the procession passed their homes, disciples performed aarti.

Acharya Swamishree Maharaj blessed all the onlookers. An estimated 12 thousand people from all over Gujarat, including hunderds from around the world, took part in this historical parade of peace and unity. 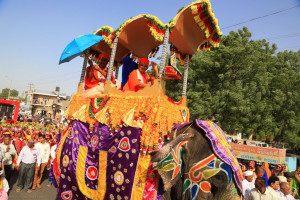 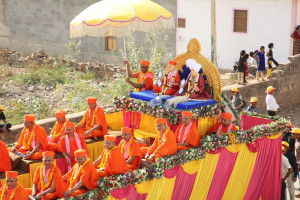 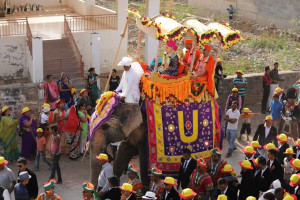 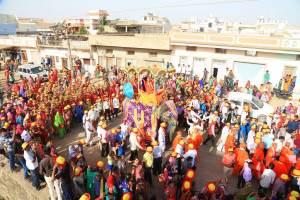 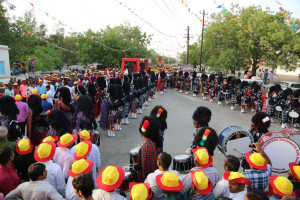 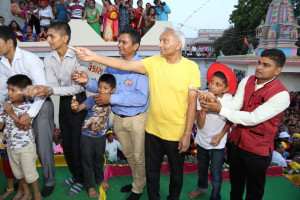