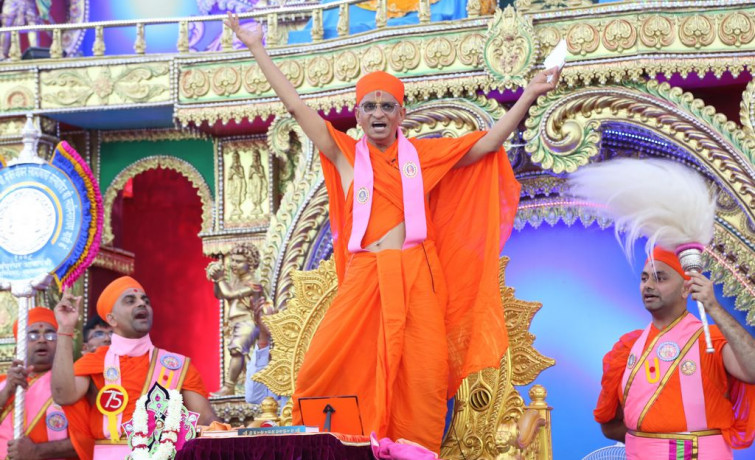 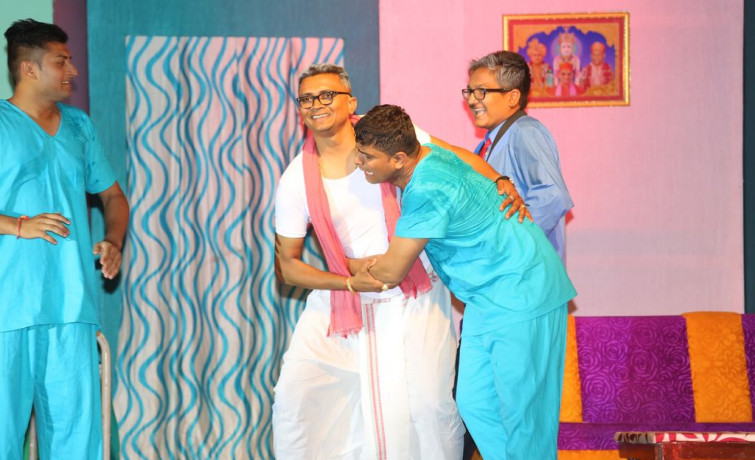 During Acharya Swamishree Maharaj’s divine blessings, he praised the Sants and disciples from all around the world who had contributed to the Mahotsav. The phrase that he repeatedly used was 'Vah re Vah' (wow oh wow).

At 5.30am, Acharya Swamishree Maharaj He performed the mangla aarti of Lord Shree Swaminarayanbapa Swamibapa in the new Mandir. Recitals of the scriptures, Pradeepika Tikopeta Shikshapatri and Shree Swaminarayan Gadi Granth continued in the assembly marque. A procession was held from the Mandir to the assembly marque, led by Shree Muktajeevan Swamibapa Pipe Band. Behind Acharya Swamishree Maharaj’s chariot, the women disciples of the families who had held scripture recitals carried offerings for the Lord.

At the stage, a group photograph of Shree Muktajeevan Swamibapa Pipe Band, represented by disciples from India, London, USA, Bolton and Kenya was taken with Acharya Swamishree Maharaj.

A new CD of devotional songs, Swamibapa ni Leela Ati Sukh-kari (Swamibapa’s Immensely Enchanting Divine Deeds), was inaugurated by Acharya Swamishree Maharaj. Singers of the devotional songs in this CD are Kajal Pandya and Nilesh Vaghela. This collection of new devotional songs is themed in the traditional Panchmahal style.

During Acharya Swamishree Maharaj’s divine blessings, he praised the Sants and disciples from all around the world who had contributed to the Mahotsav. The phrase that he repeatedly used was 'Vah re Vah' (wow oh wow).

Acharya Swamishree Maharaj explained the history of Bharasar village. “There is mention of this region in ancient manuscripts. Approximately 4000 years ago, the Harrappan Dam existed in this region. Originally, it was approximately 500 meters south from where it currently is. The overflow of the water from the dam was collected by a small reservoir near the old Bharasar (Harrappan time – 2000 BC). The dam water was collected from the reservoir and utilised for irrigation in the lower area by means of ground water channels cut in the stones of the ground. Signs of such channels are still visible. That lake was known as ‘Bhar’. That gave the name Bharasar (‘Sar’ suffix meaning lake).

“Another explanation for the name is that in Samvat 1863, Kutch’s famous King Bharmalji formed a new village in the region. The lake was known then as Pancha. The king’s name was joined with the suffix ‘sar’ and this gave rise to the name ‘Bharasar’.

“Lord Shree Swaminarayan visited the region of this village. He passed through the region of the village’s main square and the street running through Bharasar. This is the exact location of our Mandir.

“Bapashree used to come to Bharasar from an early age, and bathe in the lake very often. He was fond of Bharasar and the disciples of the village had admiration and respect for him. It is said that Bapashree had visited each home of Bharasar at the time, and explained the supremacy of Lord Shree Swaminarayan to disciples. It was in this Bharasar village that after Bapashree had departed from this mortal world, his memorial scripture recital was held in the presence of Sadguru Shree Ishwarcharandasji Swamibapa. This scripture recital was of the Vachanamrut Rahasyarth Pradeepika Tika and Gurudev Swamibapa was the orator. This was Swamibapa’s first visit to Kutch and his first scripture recital.

“Swamibapa was a proponent of compassion and unity amongst the people. Bapashree says in Varta 62 that if you mix gor, sugar, ghee and flour, the resultant mixture is tasty and eatable. Each of these elements on their own are unpalatable. Similarly, staying together in unity at Shree Swaminarayan Gadi will result in unsurpassed divine riches, in the form of the Lord’s Murti. A farmer’s cart got stuck in the mud. He had alienated all the villagers and therefore no-one would come to help him. Can he free the cart alone? No! But if he had treated others with respect, they would have come to help him. Similarly, learning to live in harmony is life’s biggest achievements.

“Let us pray to the Lord that we may develop the strength, wisdom and resilience to be able to remain for the duration of our life at Shree Swaminarayan Gadi, performing devotion with all the other devoted disciples from around the world.”

The ashirwad included a highly comical sketch performed by one of Swamibapa’s Sants.

After the divine blessings, disciples who had contributed to the construction of the new Mandir were presented with Prasad and momentos.

During the evening assembly, the disciples of Bharasar and Naranpur performed a religious drama. The evening was directed by Shri Saurabh Rajyaguru.

The drama depicted the story of 2 friends. One is a devout disciple whilst the other has no interest in religion. The regulations of religion may feel restrictive to some but for adherents, they define the limits of behaviour. The irreligious friend becomes addicted to drugs and alcohol. Some time later, his addiction results in his kidney failure. The disciple donates one of his kidneys to his friend. The transplant takes place successfully. However, the disciple’s remaining kidney stops working efficiently. They go to Acharya Swamishree Maharaj who gives prasadi water. By his grace and blessings, the kidney starts to function properly. Seeing this makes the friend realise the power of true faith and dedication to Lord Shree Swaminarayanbapa Swamibapa and Acharya Swamishree Maharaj.

The evening concluded with a devotional dance performed by Sants and young disciples – Hasi ne Bolavi Maru Chit Chori Lidhu re (the Lord smiled and called me to Him; he stole my heart and mind). 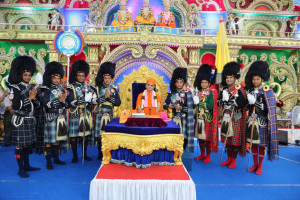 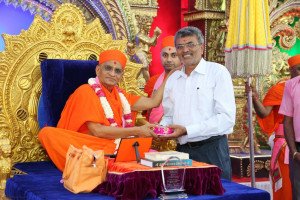 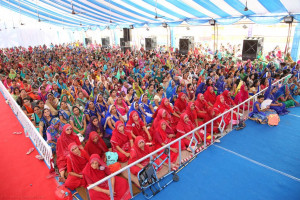 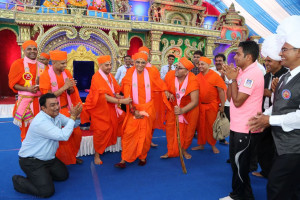 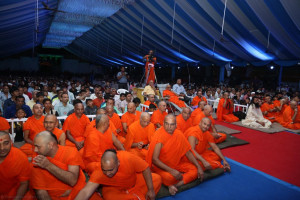 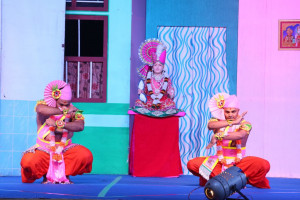