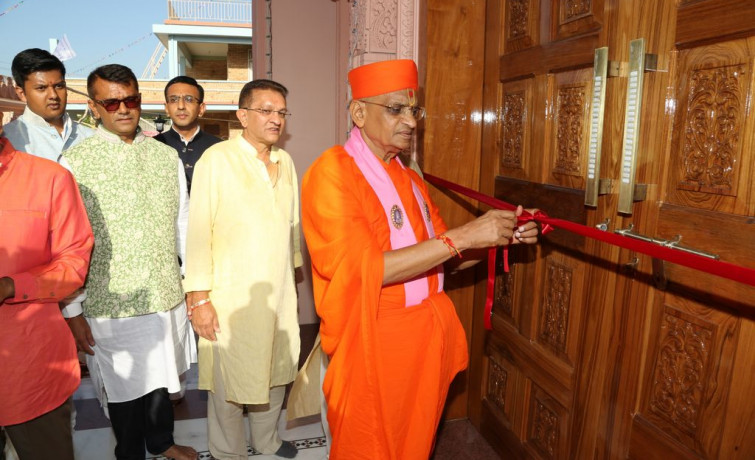 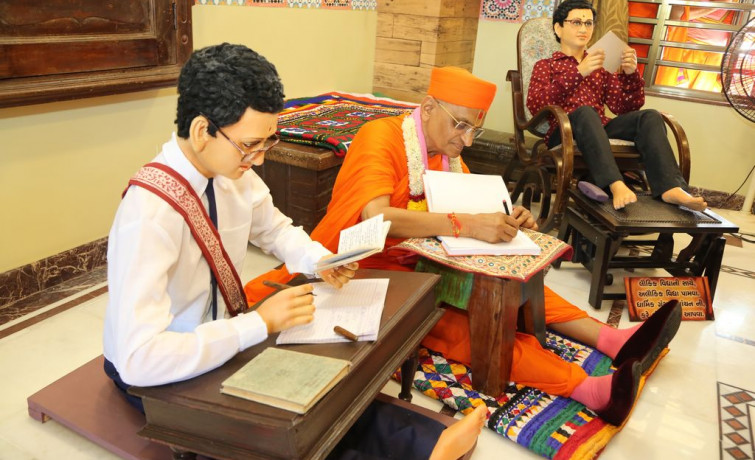 The small village of Bharasar in Kutch was established officially in Samvat 1863 (1807AD). In the outskirts of the village is a small lake called Panch Talavadi, which Gurudev Swamibapa renamed Ghanshyam Talavadi. Lord Shree Swaminarayan bathed here in Samvat 1859 (prior to the official establishment of the village). Jeevanpran Shree Abji Bapashree, Shree Ishwarcharandasji Swamibapa and Shree Vrundravandasji Swami bathed in the lake many times, as has Gurudev Swamibapa.

Jeevanpran Swamibapa first went to Kutch in Samvat 1987 (1931AD) with Sadguru Shree Ishwar Bapa to perform a parayan in honour of Bapashree (anniversary of Bapashree’s antardhan). This parayan was held in Bharasar. Shree Ishwar Bapa commanded Swamibapa to sit on the Gadi and recite the Vachanamrut Rahasyarth Pradeepika Tika scripture. Swamibapa had been a Sant for less than 2 year at the time, and was under 25 years old. Still, he sang praises of Bapashree so much that everyone in Bharasar became attracted to him, and recognised him to be the upholder of Bapashree’s principles. Therefore, it was thought that a separate Mandir for our Karan Satsang would never be needed. Except for 2 individuals, all the rest of Bharasar’s residents were disciples of Bapashree and Swamibapa. However, Swamibapa forecasted that a separate Mandir would indeed be needed in the village. Shortly thereafter, in Samvat 2023 (Tuesday 23 May 1967), Swamibapa established a new Mandir in Bharasar.

The site of the new Mandir was originally the village common ground where all the farmers placed their crop, which was then divided up and distributed to the land owners (khadvad). Disciples said that it would never be possible for this ground to be sold for the Mandir. However, it was Swamibapa’s firm wish to build the Mandir at this location. Accordingly, the first official Mandir of the Karan Satsang in Bharasar was opened exactly 50 years ago.

Many divine entities have originated from Bharasar – the most important being our beloved Acharya Swamishree Maharaj. On Samvat 1998 Adhik Jeth Sud 13 (Thursday 28 May 1942), at the home of Shamjibhai Naran Madhani and Ramba.

By the grace of Acharya Swamishree Maharaj, new Mandirs (separate Mandirs for men and women) with traditional Hindu architecture were built and a five day festival is being held from Saturday 6 May 2017 to Wednesday 10 May 2017 to celebrate the opening.

Most significantly, exact site of Acharya Swamishree Maharaj’s manifestation has been purchased by Maninagar Shree Swaminarayan Gadi Sansthan and a permanent exhibition created. The inauguration of this sacred site, Purushottam Pragatya-dham, is taking place as part of the festival.

This festival forms a facet of the year long celebrations in honour of Acharya Swamishree Maharaj’s Sadbhav Amrut Parva, i.e. 75 years since his manifestation.

At 5am, Acharya Swamishree Maharaj performed the mahapooja ceremony in the Mandir to commence the rituals for the Murti installation. This ceremony will continue for the duration of the festival and conclude on the final day. He then performed the mangla aarti of Lord Shree Swaminarayanbapa Swamibapa.

After the inauguration, Acharya Swamishree Maharaj presided upon a chariot, and led by Shree Muktajeevan Swamibapa Pipe Band to the assembly marque. Chief guest on this first day of the Mahotsav was Mahamandaleshwar 1008 Shree Bhartiji Maharaj of Junagadh. Acharya Swamishree Maharaj and the guests lit a flame as the official inauguration of the Mahotsav.

The inauguration of Shree Satsang Mahasabha, a new scripture written by Shree Vignanprakashdasji Swami was performed by Acharya Swamishree Maharaj and sponsors of the publication. The trust, Satsang Mahasabha, was established by Jeevanpran Abji Bapashree to save the principles and doctrines of the supreme Swaminarayan Sampraday from corruption and to reform the administration of the religious association. This book describes the facts behind the reasons for its establishment, and the hardships endured by Shree Muktajeevan Swamibapa as he remained firm in upholding the principles of the Satsang Mahasabha.

A new CD of devotional songs, Mohan Mahole Padharo (Oh Lord! Come to my abode), was inaugurated by Acharya Swamishree Maharaj. The music director for this CD is Shri Kirtibhai Varsani, and its sponsors are Shree Swaminarayan Sidhant Sajivan Mandal Bharasar. The lyrics to the kirtans in this publication have been written by Shree Brahmanand Swami, Shree Krushnanand Swami, Shree Ayodhyaprasadji Maharaj, Gurudev Shree Muktajeevan Swamibapa and Shashtri Shree Sarveshwardasji Swami.

During Acharya Swamishree Maharaj’s divine blessings, he talked about the significance of the village of Bharasar in the Karan Satsang. He also acknowledged the dedication of the people of Bharasar. He said that it was this absolute affiliation with the Karan Satsang that has taken a physical form, as the new Mandir in Bharasar, and the creation of the Purushottam Pragatya-dham. In reference to the scripture recital taking place, Acharya Swamishree Maharaj explained, “Lord Shree Swaminarayan has written the Shikshapatri scripture, which is for the benefit of all souls, not only for those who are in the Swaminarayan Sampraday. This is the instruction manual for a soul to experience great happiness within this life and thereafter. It is therefore written in a general context. The meaning of each verse is dependent on the teacher who explains it. We have been fortunate to have the supreme Lord’s spiritual heir as our Guru and therefore, he has taught us the meaning of the Shikshapatri as the Lord had intended it to be understood. This supreme philosophy is contained in the new scripture, whose recital is being performed during the festival.

“In summary, the scripture explains never to cause distress or harm any other soul; discard all arrogance and keep respect for all elders; stay away from quarrels and arguments, maintain harmony with all.

“We are all disciples of Shree Swaminarayan Gadi. We are all children of Gurudev Swamibapa. We must never behave in a manner that would cause embarrassment or distress to our elders.”

After the divine blessings, representative disciples of Bharasar presented Acharya Swamishree Maharaj with a pearl garland and decorated kalash (ceremonial urn) made by the ladies of the village who are over 45 years of age.

During the evening assembly, Swamibapa’s talented young Sants and disciples from Kutch, Gujarat, UK and Africa presented a series of dramas about the remarkable work of Acharya Swamishree Maharaj around the world. The short stories of Acharya Swamishree Maharaj’s miraculous deeds were interspaced with devotional dances themed according to the places where the events depicted in the dramas took place. 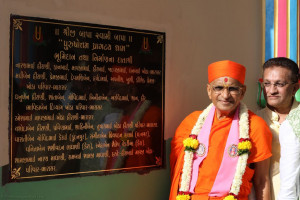 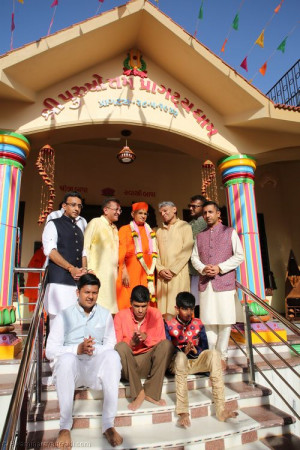 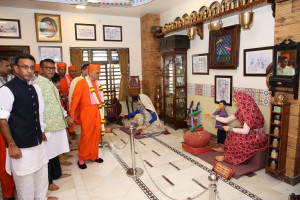 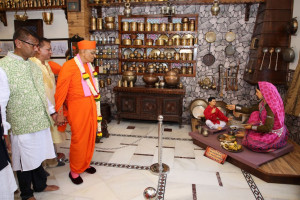 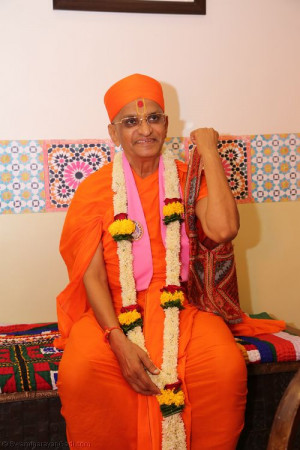 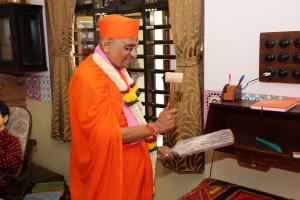