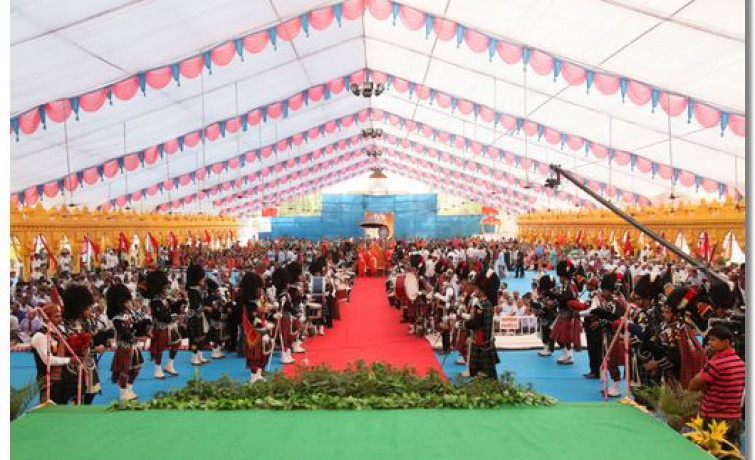 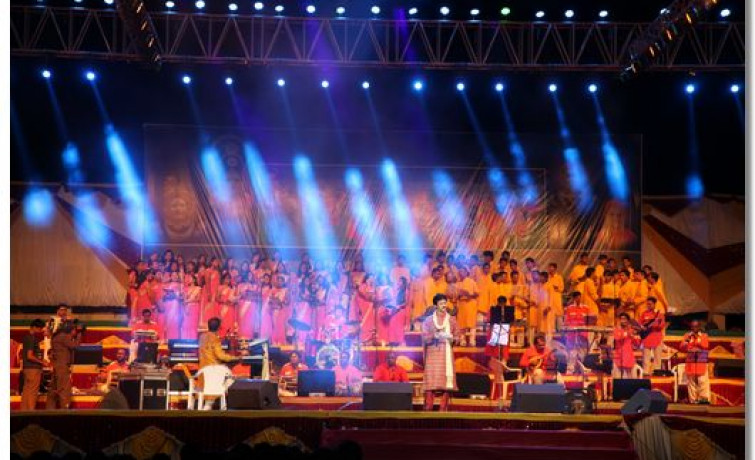 Two days of the Golden Jubilee Festival have elapsed. The joy in the Sants and disciples is flourishing more and more as they witness each of the different splendid and wondrous facets of the festival.

We should look at the background to the festival that we are so fortunate to be enjoying. The site where Shree Ghanshyam Maharaj magnificently presides here in Bhuj was sanctified by Lord Swaminarayan Himself during His many visits to the city. At one time, the central government of Kutch was located from that site. It was the forecourt to the King of Kutch’s palace, and thus it was named Darbar Gadh Chowk, the square of the King’s palace. It is in this same location that our Mandir is situated. However, the king that now presides here is not merely a mortal king, but He is the supreme emperor of countless divine abodes; and of kind administration that takes place here now is somewhat different; not worldly government, but spiritual.

Fifty years ago, all the government offices were in Bhuj. If someone had any legal matters to deal with, they would also have to go to Bhuj. However, our disciples had no place of their own in the city, which made coming and remaining in Bhuj, very arduous. To fulfil this need, Swamibapa decided to establish a Mandir, but he was adamant that the site should be centrally located and within the walls of Bhuj’s fortress. The king’s motor garages and used to be where our Mandir now stands. What a splendid coincidence this is. Once, the vehicles to take the king from place to place were situated here; and now, the supreme Lord, by whose darshan souls are transported to eternal bliss, now magnificently presides here!

To celebrate the festival, special trains brought disciples to Bhuj from all over Gujarat. The divine Murti that Swamibapa installed was 64 ¼ inches tall. That is because when Lord Shree Swaminarayan was giving darshan in a human form, He was 64 ¼ inches tall. Therefore, it was Swamibapa’s wish to install the Murti that was exactly the same. In the entire Swaminarayan Sampradaya, this was the first time that such a grand Murti had been ceremonially installed. Furthermore, the entire Kutch region had prospered due to Jeevanpran Shree Abji Bapashree’s blessings. By manifesting here, Bapashree instilled true devotion into the people of Kutch. He explained the glory of Lord Shree Swaminarayan to everyone and paved the way for their eternal salvation. Therefore, it was appropriate that Jeevanpran Bapashree’s divine Murti should also be installed here, at the headquarters of the Kutch Faith. Swamibapa installed the Murti of Jeevanpran Bapashree adorned in golden robes in the main altar of the Mandir.

Bapashree’s mercy upon Kutch is truly immense. If anyone came into his contact, that individual would definitely become attracted to him. Such was Bapashree’s charm and charisma. Such was his sweet smile and gentle voice. Countless people from all sectors of the community were touched by him, and became worthy of salvation.

We are fortunate to be the children of that very same Lord Shree Swaminarayan and Jeevanpran Shree Abji Bapashree. We should be immensely proud and honoured of our heritage.

The epitome of divine love, Lord Swaminarayanbapa Swamibapa is showering us all with His compassion and grace. Whether we are worthy or not, He keeps on bestowing such mercy upon us. Such is our great fortune, because, we are His true children; we are the disciples of Shree Swaminarayan Gadi. May we remain conscious of our fortune at all time, and spend the entirety of our lives in accordance with His will.

The afternoon assembly commenced with scripture recitals by Sadguru Sants. Following this, a number of guests were welcomed. A special ‘Sahitya Sanmelan’- a gathering of authors, poets and literature professors, was also held. A number of scholars including Shree Kirtibhai Khatri and Shree Jayanti Joshi also gave speeches on this occasion. Following this, Acharya Swamishree Maharaj bestowed divine blessings.

We welcome all the authors of poetry and literature here, to the home of Lord Swaminarayanbapa Swamibapa during the occasion of Shree Ghanshyam Maharaj Golden Jubilee. In this Organisation, we recognise and commend every kind of excellence, not only religious aspects. The value of good literature is immense. Philosophers have stated that a person who does not have interest in literature, music or the fine arts, is like an animal that has no horns or tail; he will remain uncultured. Therefore, you all have a very important role in the community. For that reason, Maninagar Shree Swaminarayan Gadi Sansthan gives you all the kind of recognition that you are worthy of.

It is a fact that literature is essential for the spread of a Faith and for the conveying of morality into the community. However, true literature is that which is written for benefitting society. The lurid novels and vile writings sometimes seen today are not literature.

Lord Shree Swaminarayan and His eminent scholarly Sants gave society a vast array of literature, which include superb texts in the languages of Sanskrit, Gujarati and Hindi, in the form of poetry and devotional songs. Even today, the verses written by the Lord’s expert poets, such as Sadguru Shree Brahmanand Swami, are studied by linguistics.

In Gadhada Middle Section Chapter 58 of the Vachanamrut scripture, Lord Shree Swaminarayan says that the flourishing of a Faith occurs through the scriptures of that Faith. That is why He commanded the Sants to continue composing scriptures for the rest of their lives. In this manner, Lord Shree Swaminarayan has demonstrated the value of good literature. In essence, He has shown the importance of writers such as you all, for the flourishing of a Nation.

In the divine heritage of Lord Shree Swaminarayan came Shree Muktajeevan Swami. He too had an immense interest in literature and learning. His work of devotional poetry, Shree Harignanamrut Kavya, is truly unique because the words of the Vachanamrut scripture itself form the basis of each devotional song. The philosophy contained in the sublime Vachanamrut scripture, aligns with the teachings of Shree Harignanamrut Kavya.

May our knowledge and wisdom be used to the benefit of humanity. May we evoke good, moral thinking through our writing. And may our literature give the guidance needed for people to progress.

As a facet to the Golden Jubilee of Bhuj Mandir, a special program of devotional music was held at Shree Kutchi Leva Patel Samajwadi - RD Varsani ground. A welcoming garland was presented to Acharya Swamishree Maharaj by the principal sponsors of the festival.

The evening commenced with an acrobatic dance by two 9 year old girls, who performed to a patriotic melody. These two young girls have won awards in national competitions.

Devotional songs, many specially written and composed for this event, were performed by the famous Indian Idol singer Bhoomi, Sanjay Omkar, Janki Iyer, Dimple Solanki, Feroz, Abhijeet and Mishtu who is a famous Bengali singer who had sung in Gujarati for the first time. The lyrics consisted of a number of kirtans written by our Nand status Sants and Gurudev Shree Muktajeevan Swamibapa. 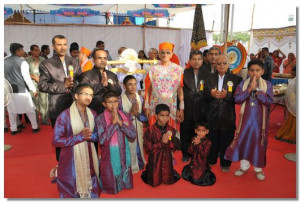 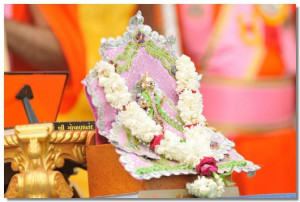 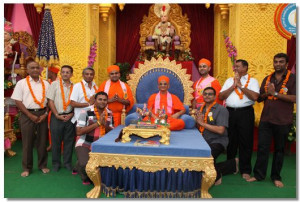 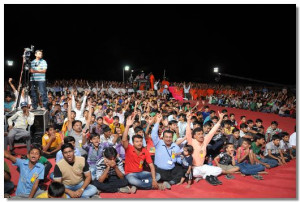 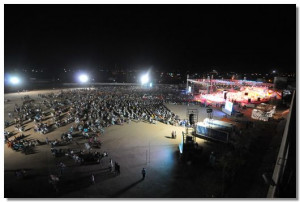 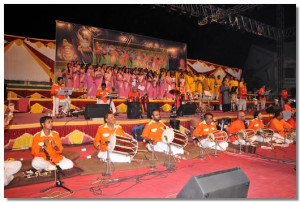